Officers arrived more than an hour after the looting began to end the free-for-all chaos. 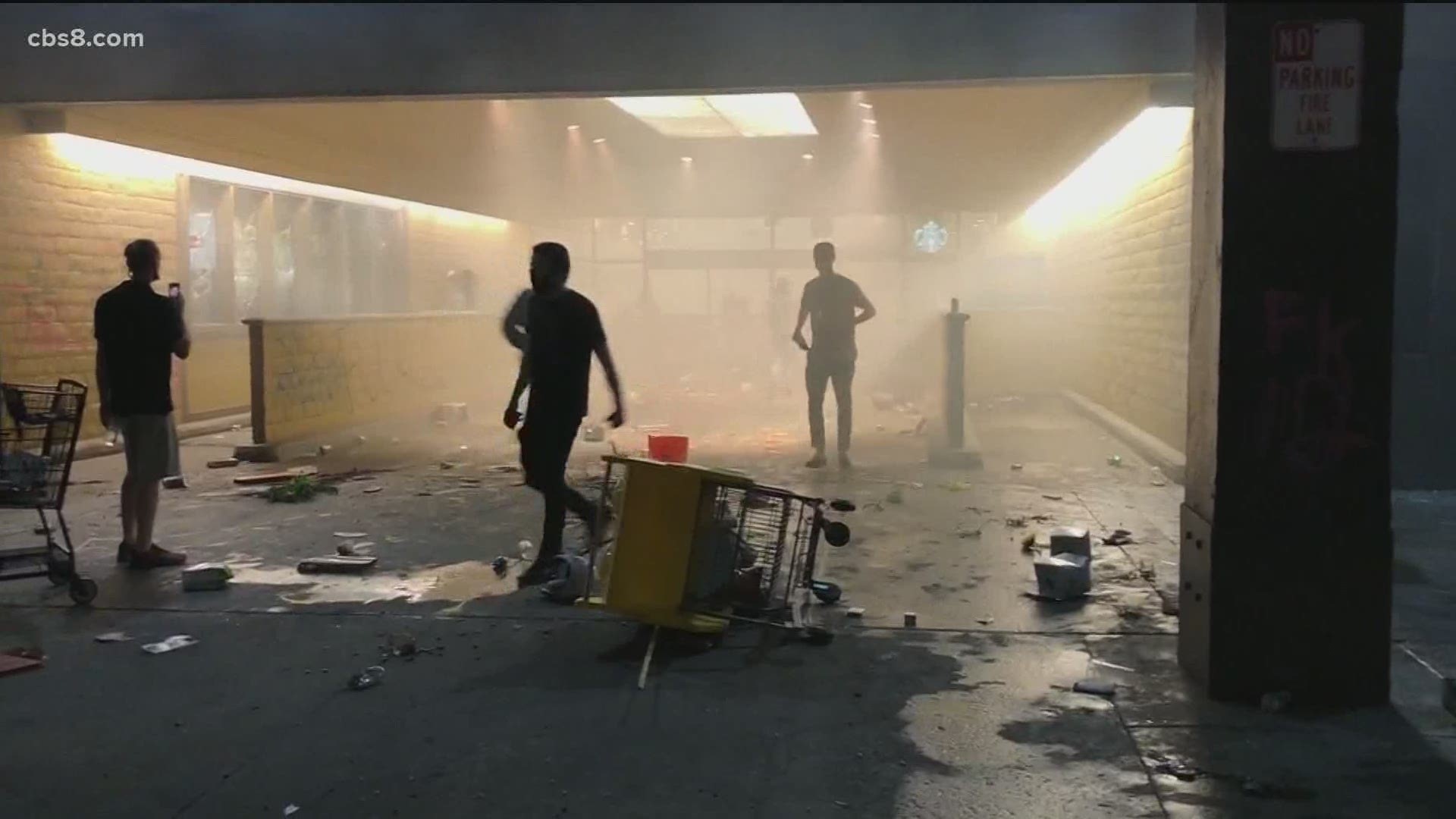 LA MESA, Calif. — Hundreds of looters were able to take over La Mesa Springs Shopping Center Saturday night as police officers were off protecting other parts of the city.

The vandalism and theft throughout La Mesa erupted after nightfall following peaceful, daytime demonstrations over the death of George Floyd had ended. 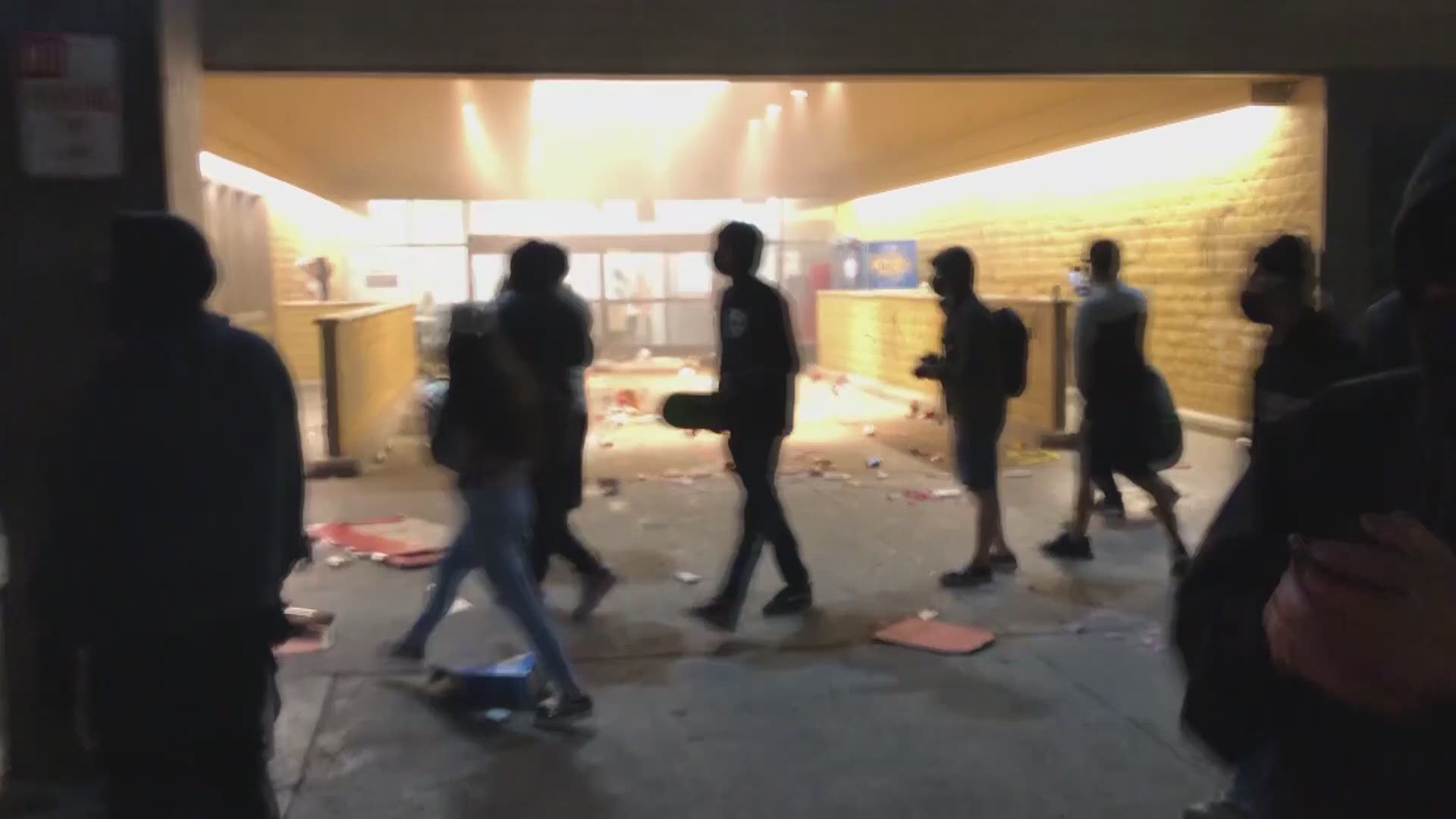 White smoke filled the Vons, apparently from fireworks being set off inside the store, as looters filed in and then carried out cases of beer and other items.

The looting continued for more than an hour with no police officers on scene.  A parade of vehicles drove through the parking lot occasionally squealing rubber and doing donuts as spectators cheered.

Within an hour of police clearing the scene, business owners started arriving to survey the damage. Steve and Janelle Clay, owners of the Postal Annex in the shopping center for the past 17 years, said they had never seen anything like this before.

A handful of community volunteers started helping the Clays clean up the broken glass and chaos inside their store. Janelle Clay said she knew why the volunteers were there to help.

"Due to conditions of extreme peril to the safety of persons and property that have arisen within the City of La Mesa as a result of rioting and looting related to a police protest on May 30, 2020, the City of La Mesa Director of Emergency and Disaster proclaimed the existence of a local emergency within the City on May 31st, 2020. Consequently, the Director of Emergency and Disaster ordered a City-wide curfew for all Citizens of and visitors to La Mesa commencing on May 31st 2020 at 7:00 p.m. and ending at 7:00 a.m. on June 1, 2020. During this timeframe, Citizens of La Mesa are encouraged to shelter in place (in a safe environment) for their personal safety. Both the proclamation of local emergency and ordering of the curfew were confirmed by the La Mesa City Council today at a 9:00 a.m. Emergency Meeting."

“My heart aches. People are upset and angry, and their outrage is justified. Yesterday, as protests picked up in La Mesa, I asked that they be constructive, not destructive. I said we must work together peacefully to address issues of discrimination and bigotry.

But asking for peace is not enough. People want solutions. They deserve solutions. They don’t want promises. They want a meaningful path forward -- and they want the nation to dig deep and address the underlying problems of racism and unequal treatment under the law. Obviously, as a white woman, I can’t completely understand the depth of these issues, but I want to do everything I can to help. We must all be part of the solution.

The county Board of Supervisors, at the request of Supervisor Nathan Fletcher, recently agreed to bring back its Human Relations Commission. That’s a step in the right direction, but it’s only one step. More is needed to address systemic, institutional racism.

I want to acknowledge and thank all those in law enforcement who live by the motto, ‘to protect and serve.’ They have a tough job right now. I want to recognize and thank the many La Mesa residents and others who have peacefully protested. I also want to thank the folks who have stepped up today to clean up La Mesa. The immediate outpouring of support is touching, and it sets the tone for how we need to come together to address these issues.”