Police arrested a father, who allegedly broke into the zoo's elephant enclosure in order to get a picture with his 2-year-old daughter in front of an elephant. 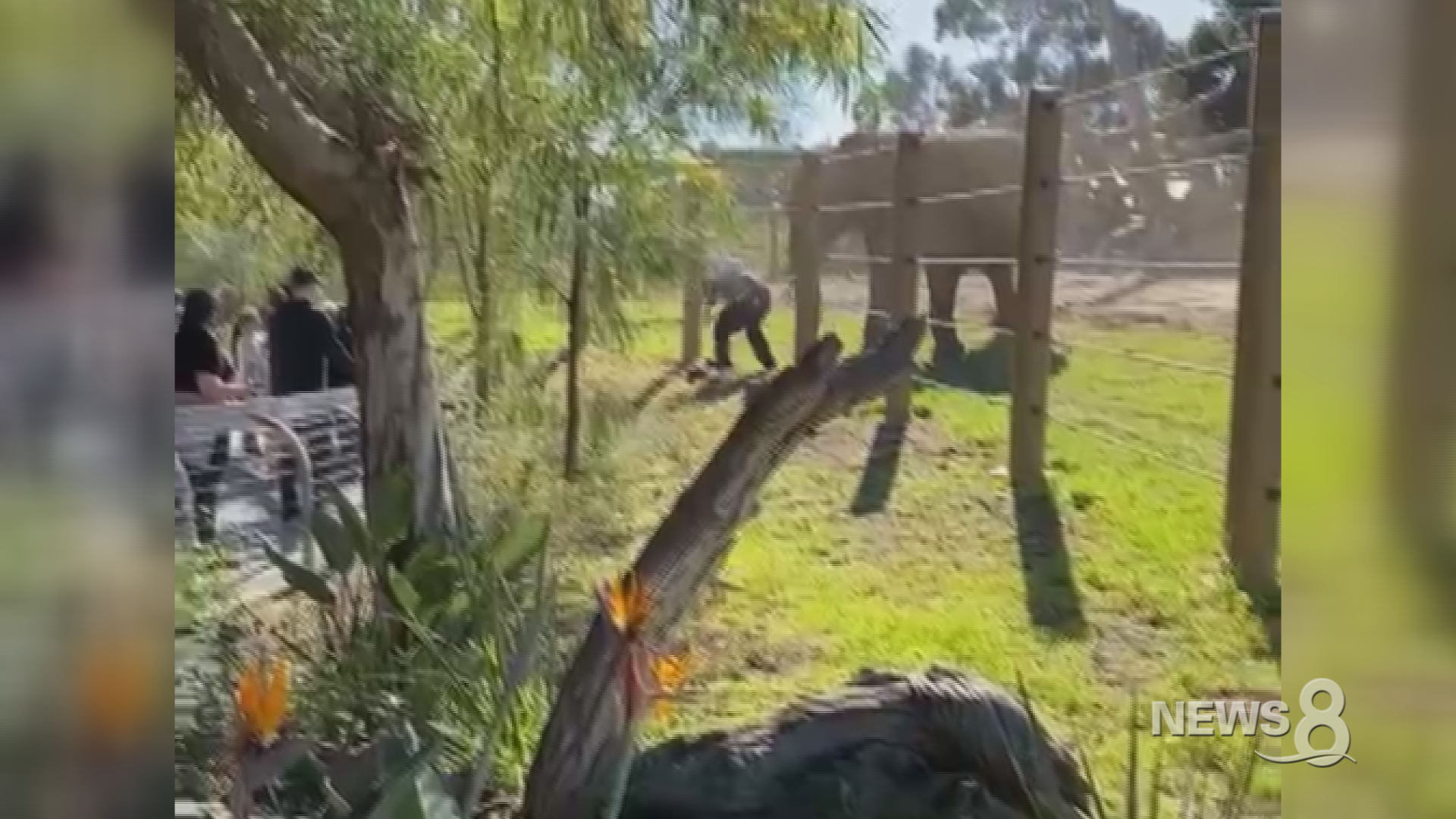 SAN DIEGO — Witness cell phone video shows a father holding his 2-year-old daughter while posing for a picture from the inside of an elephant enclosure at the San Diego Zoo on Friday afternoon. The up-close animal picture quickly turned dangerous as the elephant is seen charging toward the father and toddler.

The video was taken just after 4 p.m. and shows the dad drop his little girl on the ground after he climbs out over the fence and then rushes back to pick her up as the elephant aggressively moves its nearly 8-foot-long trunk toward them.

“It’s an extremely dangerous situation, and no one in their right mind should ever think about doing this,” said Catherine Doyle, the director of science, research and advocacy with PAWS, the Performing Animal Welfare Society.

Doyle, who’s worked for PAWS, based in the Bay Area, for nine years said the elephant was protecting its space.

“The elephant you saw I believe is Chaba, who was actually taken from the wild when she was a baby, taken away from her wild family. She was responding the way really an elephant would to an intruder. It looked to me like it was a mock charge, which is really intended to scare off an intruder. However, if Chaba thought her message wasn’t getting through, it could’ve turned into a more serious attack,” Doyle said.

It was serious enough for San Diego police to arrest the father, 25-year-old Jose Navarrete, and book him into county jail on charges of child neglect, child abuse, and trespassing.

“It was incredibly dangerous for the father and child, and I think they were both just very, very lucky. Oftentimes, the public thinks of elephants just like Disney’s Dumbo where they can pet them and ride them, and that’s not the case. Wild animals are unpredictable,” Doyle said.

The San Diego Zoo released the following statement on the incident:

“On March 19, two guests, despite multiple barriers, purposely and illegally trespassed into a habitat, which is home to our Asian and African elephants. San Diego Zoo security promptly responded to the incident, but the guests had already exited the habitat. Both the elephants and the guests are unharmed.”

Zoo guests witnessing the danger unfold could be heard screaming as the father and daughter narrowly escaped the elephant’s path.

Navarette is being held on $100,000 bail for the child cruelty charges, according to his jail records, which also state he is to appear before a judge for the charges on March 30.

“If someone thinks that they’re going to take a chance, you know, for a thrill, try to do something like this, and do a selfie with a wild animal, you know you can end up losing your life,” Doyle said.

San Diego Zoo did not release if any new safety protocols would be taken following the elephant enclosure breach. The zoo remained open and did not close due to the incident.