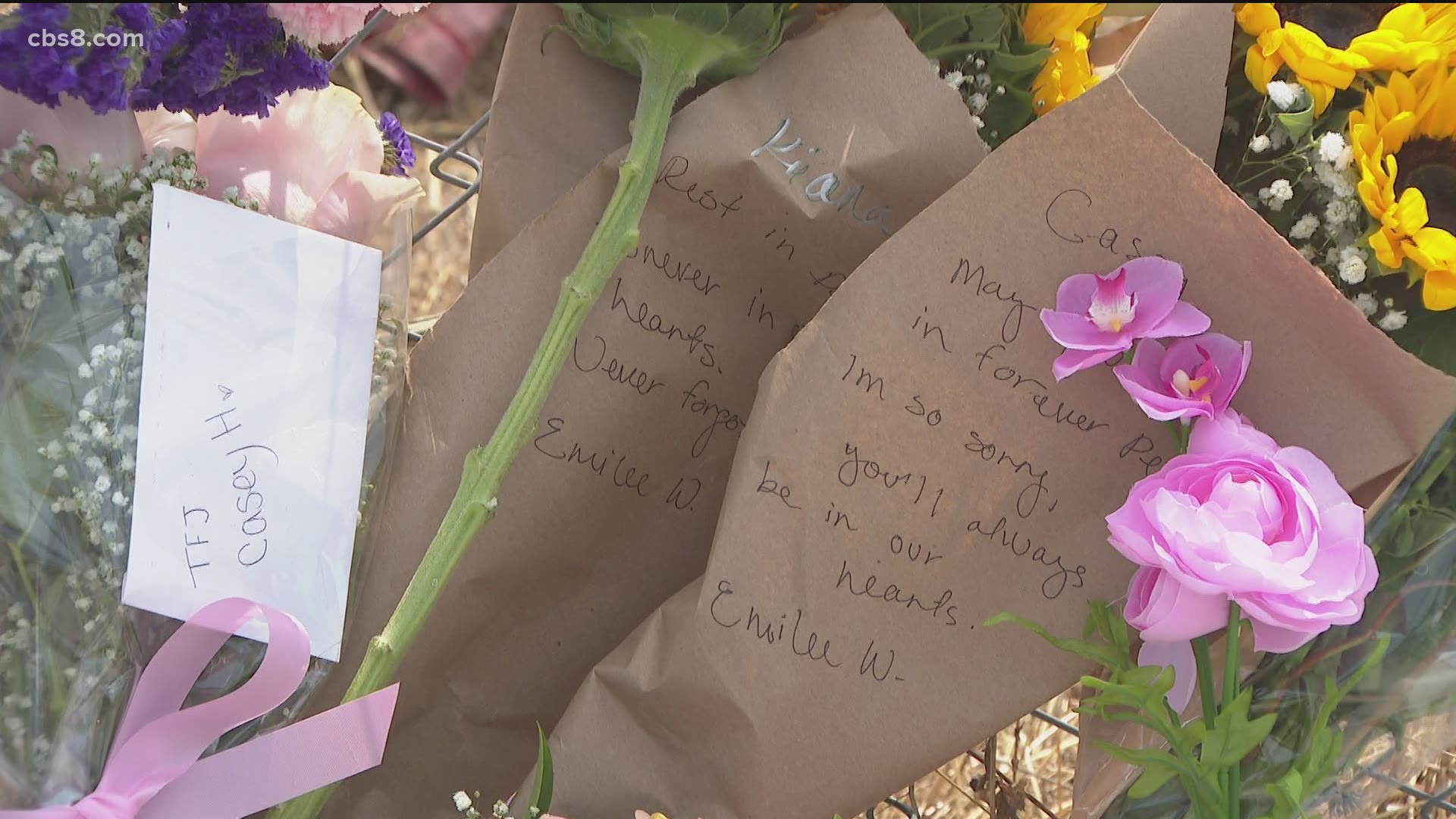 SAN DIEGO — It’s utter heartbreak for the families of two young women killed in a fiery car crash that happened Wednesday night in the College Area. Both women were taken to the hospital with severe burn injuries, where one was pronounced dead six hours later, and the other died from her injuries Friday.

"They were just sitting at a light, and a Mercedes just…they didn't even see it coming,” said Joanne Goss, godmother of Casey Hargis, who’s been best friends with Casey’s mother Marissa since they were 10.

Goss drove down from Encinitas to drop off flowers and candles for Casey, who Goss said was just at her home one week prior.

"She was going to change the world," Goss said.

Both 22 years old, best friends Casey Hargis and Kiana Taylor were in Kiana’s Ford Fusion near the 70th Street and El Cajon Boulevard intersection. The pair was out getting snacks to watch a movie on Wednesday, Sept. 9 around 9 p.m. when the unthinkable happened. San Diego Police say a speeding driver ran a red light in the College Area and slammed into Kiana’s car, which collided into other cars.

"The dad of Casey saw the video. It looked like the driver was going about 120 miles per hour. He had a medical condition,” Goss said.

Surveillance video from the Greek Smoke Shop's owner Tony shows the fiery crash before Tony ran out with a fire extinguisher he used to put out the flames and helped pull the women out of the burning car.

"It sent them into the other lane, and when he hit them, the car burst into flames,” Goss said.

Nick Hanshaw was a witness at the intersection making a righthand turn.

“Behind me, I heard several cars hitting each other and cars skidded down the street. There was a big fire. We heard the screams from the two passengers inside screaming to 'get me out. get me out,” Hanshaw said.

Hanshaw said both women were severely burned, and at least six people were injured and taken to hospitals.

“It just happened so quick. One woman had half her face burned and the other looked like she needed CPR,” he said.

At a makeshift memorial at 70th and El Cajon it says "Sweet Angels Rest In Peace."

Classmates from La Mesa Middle School and Helix High came by the dozens to pay their respects.

"They were just loved by so many people, I had so many people tell me that Kiana was like the first person to talk to them in middle school,” said Christina Ventura, a classmate of both Kiana and Casey.

Leaving heartfelt handwritten notes saying "once a Scottie, always a Scottie" for the two Highlanders, there was a stream of flowers, balloons and candles.

"I just saw Kiana not too long ago when I was on a camping trip, and I didn't know that was going to be my last time seeing her. I just wished I had talked a little more to both of them,” said Salma Silva, a middle and high school classmate of both Kiana and Casey.

Kiana Taylor just graduated San Diego State in May in Psychology with plans to attend graduate school in Germany. Her big sister Nisa Taylor said, "Kiana lived life to the fullest, she was always so positive and had big dreams."

Kiana was one of five siblings in her close-knit Taylor family. Nisa said the family didn’t know Kiana was involved in a crash until Thursday since there was difficulty identifying the women and very little information was given to them about the actual circumstances of the crash.

“Our precious Kiana, You were the most beautiful person we had ever met. Everyone absolutely adored you from your striking smile to your hilarious, contagious laugh. Anything we ever needed, you were right there by our side. Our families knew how much you meant to us. We can’t be without you, but we know you couldn’t be without Casey.”

Casey Hargis was a sports lover and the Philanthropy Vice President of her Alpha Xi Delta Sorority at Cal State Northridge.

"If the schools were open, she wouldn’t have been here. The family is beside themselves, and with COVID, only 25 people can go to the funeral,” Goss said in tears.

"They were best of friends since they were 5. They're together now in heaven,” Goss said.

There is a GoFundMe page set up for both women to help their families with funeral expenses.

Outpouring of flowers, balloons and candles for two 22-year-old women Casey Hargis and Kiana Taylor, who were both killed in a fiery car crash Wed. night at 70th & El Cajon Blvd. in San Diego. Both were graduates of Helix High School and La Mesa Middle and finishing college @CBS8 pic.twitter.com/ZqF4SBIEyy