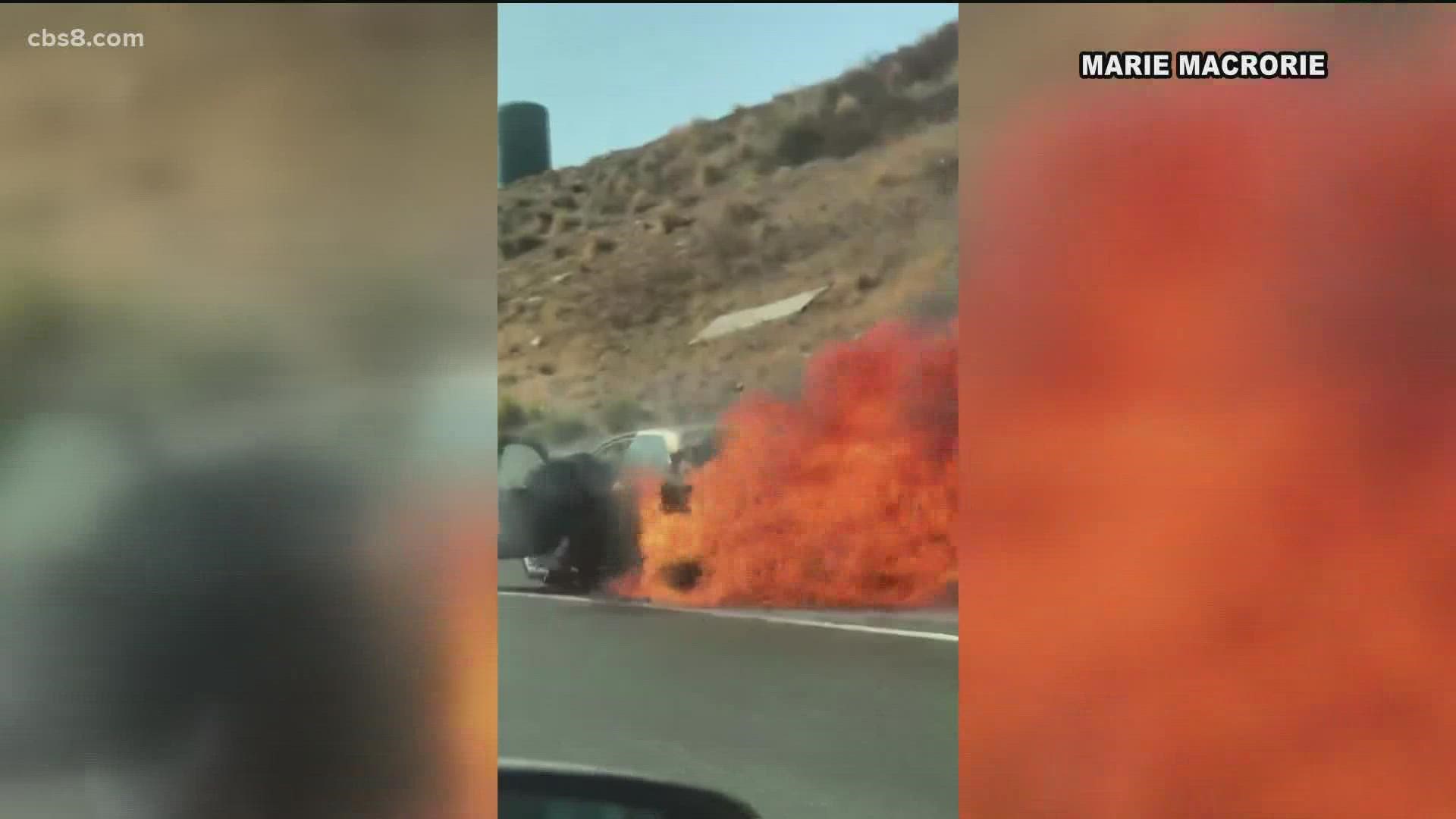 LAKESIDE, Calif. — If you see a car on fire on the opposite side of freeway, do you stop and get out and help? Five men from the East County Transitional Living Center did just that and jumped into action by pulling a couple in their 90s out of their burning vehicle.

"It happened so fast, we just reacted immediately. There was someone needing our help, and there was no one there to help, so we are thinking 'wow, this is going to explode soon,' as the fire was near the gas tank,” said good Samaritan Jeff Lucas.

The five men saw the couple’s car on fire on Labor Day just before 4:30 p.m. in the westbound lanes of Interstate 8 in Lakeside before the exit for Lake Jennings Park Road.

"Oh my gosh someone is in there,” shouted witness Marie Macrorie, who shot cell phone video of the car fire rescue as the five men, who were on the opposite side of the freeway, parked in the median and rushed to help.

5 Good Samaritans from the @eastcountytlc pull a couple in their 90s from Phoenix out of their burning car on I-8 to safety on #LaborDay. The elderly couple is recovering from burns in the hospital along with 1 of the Good Samaritans who got burned on his arm. @CBS8 @LakesideFire pic.twitter.com/fDvePzB1A5

“We ran over there. A couple of the guys grabbed the wife and the other two grabbed the husband who was driving. Even when the elderly gentleman was on the ground with his arms severely burned, he did not seem like he was in any pain, he was more concerned about his wife,” said good Samaritan Harry Hemphill, who rushed to save the couple even though he suffers from smoke.

The Good Samaritans are all from the East County Transitional Living Center in El Cajon and were traveling together when they collectively decided to help.

"We just saw this guy, and he is stuck in his seatbelt, so we kind of snatched open the door, and unbuckled the seatbelt, my buddy Barry snatched him out of the car and carried him to the side of the road,” said good Samaritan Andre Leggett.

The fifth good Samaritan named Barry was in the hospital as of Tuesday with a burned arm after helping to pull the couple from their burning Toyota.

"Even we did not even realize that there was somebody in the passenger seat, that is just how much smoke was in the car,” Lucas said.

None are more grateful than sons Steve and Mark Williamson that their parents were rescued and now recovering at UCSD Medical Center.

"Our dad had some burns to his left side, and my mom got out with unbelievably just abrasions. We are just so grateful, these guys are heroes to us and to our parents for stepping up immediately, and that is phenomenal,” said son Steve Williamson, who traveled from Phoenix to San Diego to see his parents in the hospital.

Ken and Joan Williamson at 92 and 90 years old were vacationing in San Diego from Phoenix for Labor Day their sons said when their car was somehow hit from behind and caught on fire unbeknownst to them.

"Everyone who saw that video knows that if those people did not pull my parents out, we would not be having this discussion right now, so I can't thank them enough. I just want them to know that they saved two absolutely beautiful people, and we would love to have information to thank him personally,” said son Mark Williamson, who also rushed from Arizona to California after learning his parents were in the hospital.

The sons said Tuesday they expected their mom to be released within the next 24 to 48 hours and their father another couple days later from the hospital.

“I am glad that they are okay and glad that God took care of them and hopefully they will be OK,” said good Samaritan Scott Andre.

If you ask the good Samaritans why did they do such a daring rescue, Hemphill’s response is:

“There was a time when like so many of us, I would not have, we would have kept driving, but because of programs like ECTLC, we are changing, and in that change, we are not just being selfish individuals, but we look out for others.”