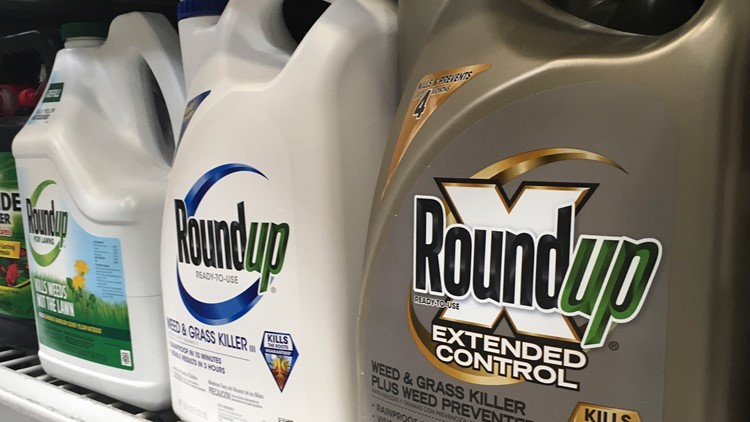 Photo by: AP
In this Sunday, Feb. 24, 2019 file photo, containers of Roundup are displayed on a store shelf in San Francisco.

SAN DIEGO — The Board of Supervisors took the first step Wednesday toward banning the use of weed-killers, that have been linked to certain cancers, on county properties and infrastructure.

The board unanimously voted to direct the chief administrative officer and related staff to identify a plan that includes organic alternatives to herbicides and come back with a report in 120 days.

Supervisor Nathan Fletcher, who proposed the ban along with Dianne Jacob, said the weed-killer Roundup contains glyphosate, which is a noted carcinogen.

"I'm all for killing weeds, but we should do it in the most responsible way," without using toxic chemicals, he said.

Jacob said she hopes San Diego County will join the cities of Encinitas, Carlsbad, Napa and Sonoma, along with Los Angeles County, which have banned using glyphosate, because "this is the right thing to do."

Fletcher and Jacob also said they hope the county may eventually review the use of other hazardous chemicals. According to the county, there is evidence that glyphosate is linked to rare cancers, including non-Hodgkin's lymphoma resulting in several major legal verdicts against manufacturers of products containing the chemical.

The county's Integrated Pest Management program currently allows use of pesticides containing chemicals if all non-chemical options have been reviewed and are unfeasible.

Four county departments use glyphosate: Agriculture, Weights & Measurements, Parks and Recreation, General Services and Public Works. According to county documents, glyphosate accounts for a relatively small percentage of pesticide use.

Supervisor Kristin Gaspar said that in 2015, while she was mayor of Encinitas, the city pioneered a similar policy in the form of a pilot project in Glen Park. She said that ultimately led to an expansion of the pest-control policy, with minimal fiscal impacts.

"Our bee population is thriving," Gaspar said, adding that she hopes the county will look at Encinitas as a model.

Supervisors also heard from residents, some of them with emotional personal stories, urging the county to prohibit the use of toxic pesticides. One woman told the board she was sprayed with pesticides and it ruined her life.

"I was a teacher and this is so incredibly personal to me," said Suzanne Hume, founder of CleanEarth4kids.org. "Knowing children are still being exposed is more than I can bear."

"To take chances on this synthetic herbicide would be irresponsible to our taxpayers," said George Courser, a Sierra Club volunteer.

Dave Schubert, a Salk Institute professor, said everyone attending today's meeting has some evidence of glyphosate in their body.

"There's no way these herbicides could pass any toxicology tests issued by the (U.S. Food and Drug Administration)," Schubert said.

David Richardson, a member of the Crest Community Association, said murals inside the board's meeting chamber "represent the basis of the ban: water, fish, animals (and) people."