Eddie Van Halen was described by locals as "a very bright, thoughtful guy," "a gentle soul" and "a genuine magical person." 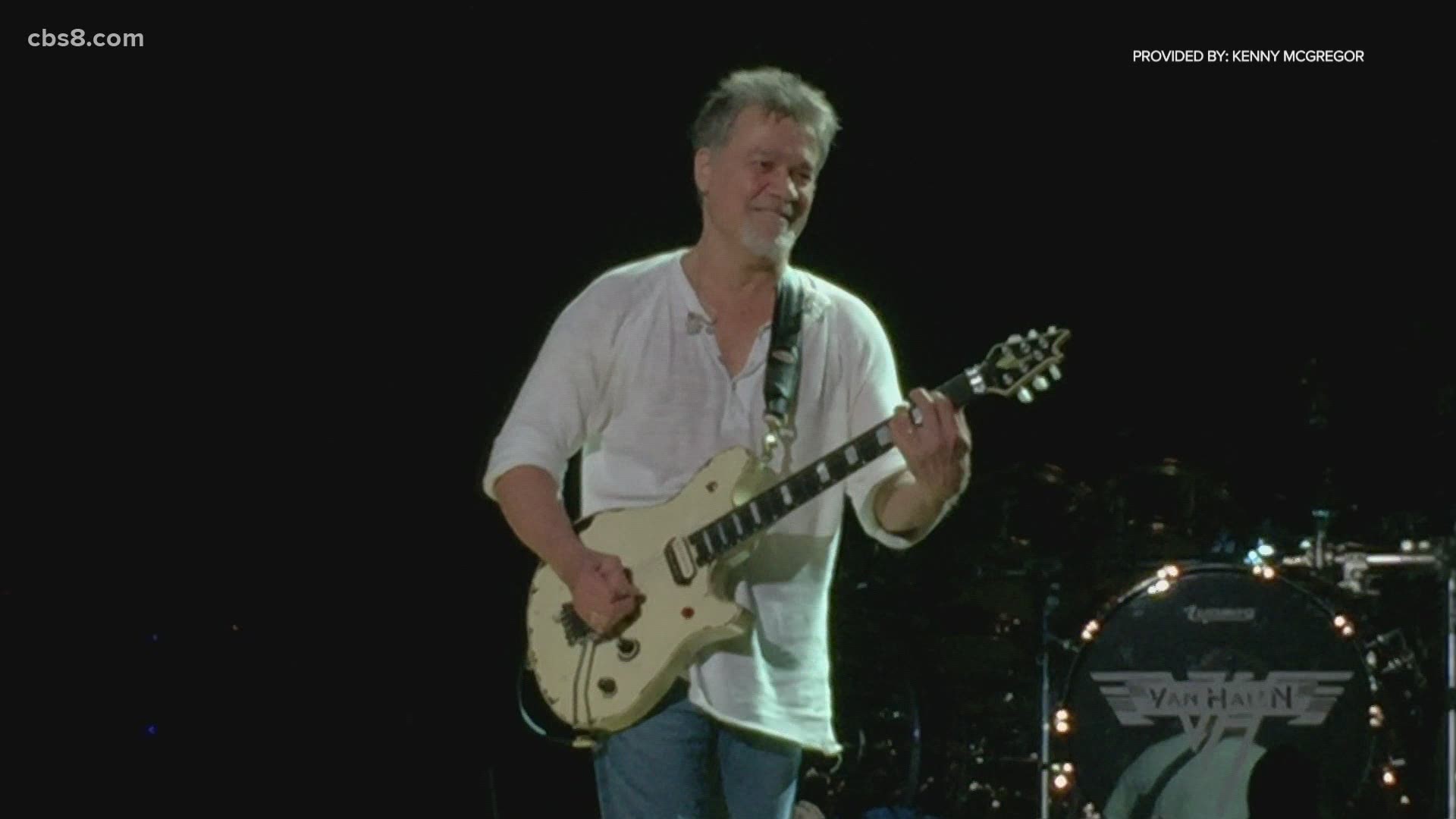 SAN DIEGO — Eddie Van Halen, arguably one of the greatest guitarists of all time, died Tuesday following a long battle with cancer. He was 65 years old.

Details about Van Halen's death were not immediately released, but TMZ reported that he died at St. John's Hospital in Santa Monica after a battle with throat cancer, which he had been fighting for more than a decade.

Van Halen and his brother Alex started the band bearing their name in the 1970s. They added flamboyant lead singer David Lee Roth before releasing their first album in 1978. It was an instant hit – selling over 10 million copies.

They went on to become one of the biggest rock bands in the world, particularly following the release of their legendary album "1984." The band pumped out energetic hits such as "Panama," "Jump" and "Hot for Teacher."

“He was a very bright, thoughtful guy. Funny. Articulate,” said Union-Tribune music critic George Varga who had the opportunity to interview Eddie Van Halen multiple times. “I think what I will miss is how Eddie brought the combination of unbelievable command of the guitar coupled with this incredible enthusiasm.”

Over the years, Van Halen played several concerts across San Diego County. Their last was September 30, 2015. Video from that concert shows Eddie Van Halen jamming on his guitar while moving tirelessly across the stage. He was an amazing live performer.

Van Halen's son, Wolfgang broke the news of his father's death on Twitter, posting, “I can't believe I'm having to write this, but my father, Edward Lodewijk Van Halen, has lost his long and arduous battle with cancer this morning. He was the best father I could ever ask for. Every moment I've shared with him on and off stage was a gift. My heart is broken and I don't think I'll ever fully recover from this loss. I love you so much, Pop."

Mayor Kevin Faulconer also sent his condolences on Twitter, posting, “Eddie Van Halen was a rock and roll icon of mine growing up. First time I saw Van Halen was at the US festival in 83. He was THE guitar god. and as far as I'm concerned, he always will be. Shred in Peace.”

Eddie Van Halen was consistently ranked as one of the top rock guitarists of all time, putting him in big demand. He famously provided the lead-in guitar track for Michael Jackson's smash hit song "Beat It."

Van Halen also had a very public struggle with alcohol and drugs, saying he started drinking at age 12. He added that he had been sober since 2008. His band went on to create a dozen studio albums and sold more than 75 million copies worldwide.

Van Halen's throat cancer has generally been attributed to his long-time smoking habit, but TMZ reported that Van Halen believed he developed cancer from a metal guitar pick he used to hold in his mouth.

Eddie Van Halen is survived by his son and his wife, Janie.