A San Diego woman's post berating a barista for telling her to wear a mask backfired when the employee received thousands of dollars in donations towards tips. 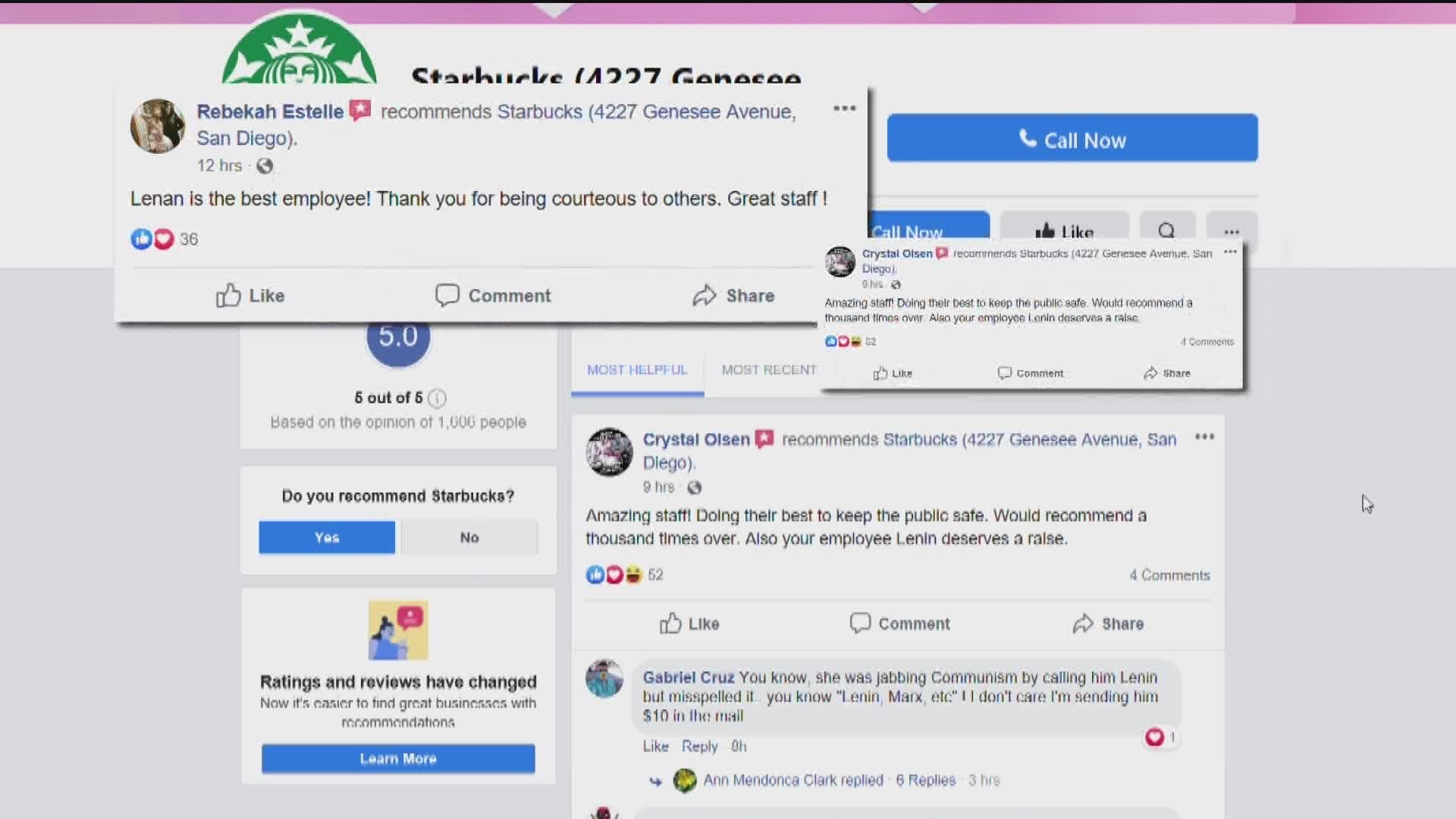 SAN DIEGO — A San Diego woman’s social media post shaming a Starbucks barista for telling her to wear a mask has backfired. As of Tuesday night, the post had more than 122,000 comments from across the world, many defending the employee.

“This is a minimum wage job he is trying to get through his day,” said former Starbucks partner Courtney White.

She stopped at the 4227 Genesee Avenue Starbucks on Tuesday to support the employee identified as Lenin Gutierrez.

“Shame on her for shaming him for doing his job,” said White.

In a prerecorded video, Lenin Gutierrez, the Starbucks barista, thanked the thousands of people who donated more than $12,000 to a GoFundMe to tip him after a San Diego woman berated him on social media for telling her to put on a mask inside the Clairemont coffee shop.

“I just wanted to say thank you for all of the love and support and what everyone is doing - it's an honor to see all this happen,” said Gutierrez.

Starbucks employee Lenin thanks supporters for dontating more than $10,000 after he was shamed for enforcing mask orders #kindnessmatters

The viral post started on Monday when the woman posted and tagged the Genesee store writing:

“Meet lenen [sic] from Starbucks who refused to serve me cause I'm not wearing a mask. Next time I will wait for cops and bring a medical exemption."

Backlash from the post created more than 40,000 shares calling the woman a “Karen” and praising Lenin. A Karen is described as a pejorative term for a woman perceived to be entitled or demanding beyond the scope of what is considered appropriate or necessary.

“What Lenin did was the right thing, he was just doing his job and didn't deserve to be berated in the store,” said GoFundMe organizer Matt Cowan.

The Irvine man said he doesn’t know Lenin and is promising him every penny raised online.

“I wanted to put money in the tip jar, and that is kind of what led to me making a virtual tip jar,” said Cowan.

People as far as Australia have donated, Mikayla Zerafa wrote, "From Australia to you, Lenen! [sic] I wish I could’ve offered more but I’m out of work due to COVID. I appreciate people like yourself who are making sure proper health practices are in place and being adhered to. I apologise [sic] that you unfortunately have had to deal with ignorant Karen’s who believe they’re above the polices there to keep people safe. Keep up the great work"

The Starbucks store’s Facebook page and Yelp have been inundated with positive reviews and support for Lenin. Yelp posted it disabled comments until this cools down.

Under Governor Gavin Newsom’s orders, you can be exempt from wearing a mask for medical reasons. The woman’s Facebook page is filled with anti-mask memes. She did not return requests for comments but responded to many on her post defending herself and her beliefs. A relative confirms she is not a COVID-19 believer and doesn’t believe masks protect against the virus.

“I want to remind everyone to be kind to one another and to love each other and always remember to wear a mask,” said Gutierrez.

Starbucks e-mailed a statement, “We want everyone to feel welcome in our stores. We respectfully request customers follow social distancing and safety protocols recommended by public health officials, including wearing a facial covering when visiting our stores.