Janae Peterson says two female employees accused her of being a man inside the women's restroom. 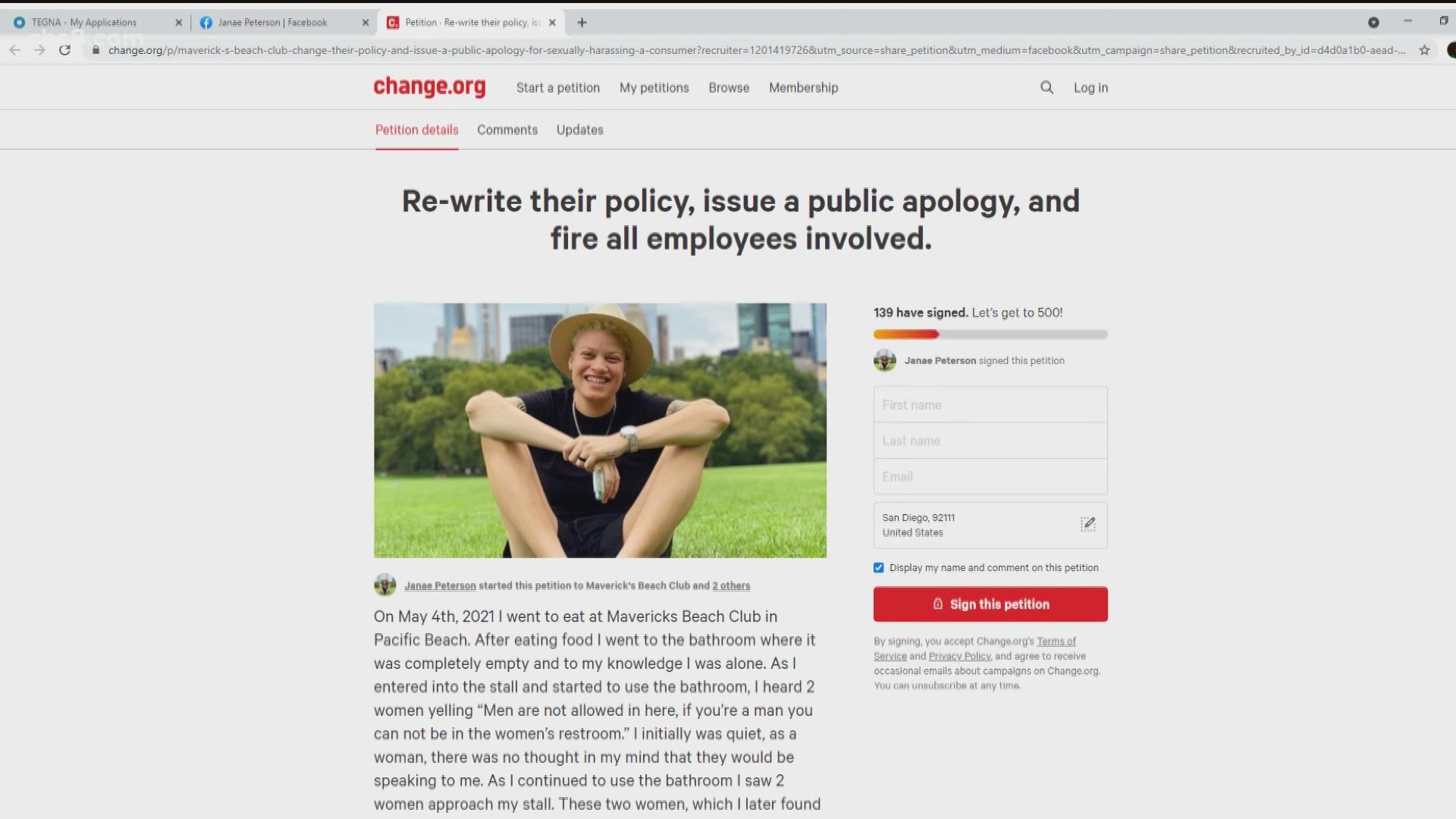 SAN DIEGO — A San Diego woman is speaking out about what she calls a humiliating experience inside a popular bar.

Janae Peterson tells News 8 she was sexually harassed by two female employees at Mavericks Beach Club in Pacific Beach after they mistook her for a man in the women's restroom on May 3.

Peterson was at Mavericks having dinner with her wife and friends. When she got up to use the restroom, she says the employees followed her in.

"I went into the big stall cuz there was no one in there and that's when everything transpired," said Peterson.

Confused, Peterson said she initially stayed quiet, but spoke up once she saw a female employee peer over her stall.

Despite Peterson confirming her sex verbally, she says another employee climbed on a toilet in the stall next to her and stared at her as she was wiping herself clean.

Peterson said she was left in tears.

She was given an apology, and offered free drinks as well as a comped bill.

None of which she said makes the humiliation go away.

Janae posted about the experience online, and even started a Change.org petition calling for Mavericks to issue a public apology and terminate the two employees involved.

She's also hoping Mavericks will change its policies, training methods and add a gender neutral restroom for the LGBTQ community.

"This issue is bigger than me because I'm not the only person who has been discriminated against daily," said Peterson.

Mavericks issued a statement saying only one employee was involved.

“Mavericks is an inclusive establishment that strictly prohibits discrimination of any kind, including on the basis of gender or sexual orientation. We are aware that one of our employees engaged in conduct that made Ms. Peterson feel otherwise. Our goal is to provide a welcoming experience to every patron that walks through our doors, and we regret that we were unable to provide that experience to Ms. Peterson.

The employee that was involved in the events involving Ms. Peterson has been suspended while we undertake a complete investigation. We are also taking this opportunity reiterate our commitment to inclusivity and to ensure that all staff continue to adhere to the highest standards that we demand from all of our employees. We are sorry that Ms. Peterson did not have the experience that she expected and deserves, and we hope that she will return to Mavericks again soon to experience the top notch service that we have to offer, which is only made possible by caring employees who strive to provide the highest quality service to all patrons who pass through the doors.”