Customers came and went Monday and there were no reported issues of rowdy or disrespectful behavior. 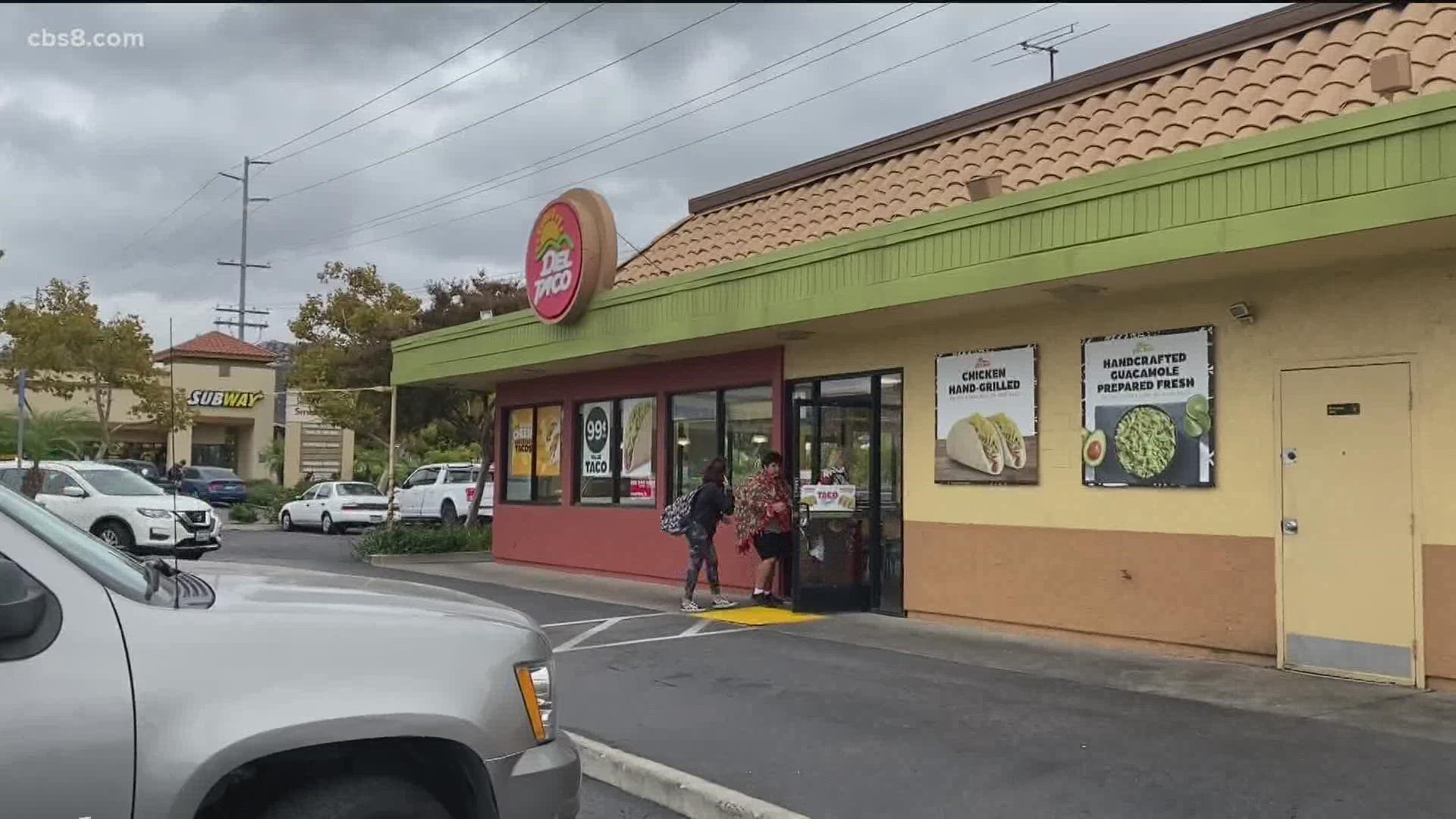 Update as of Monday, Oct 25: On Monday, the posted note on the door was no longer up, and the indoor dining area remained open all day. Customers came and went and there were no reported issues of rowdy or disrespectful behavior. However, owner Dwayne Johnson told CBS 8 that they're keeping a watchful eye on who comes into the restaurant during afternoon hours and if anyone gets rowdy or disrespectful, they'll be asked to leave immediately. He says most of the kids are well-behaved, and that it's only a select few who have been causing problems, but he hopes things will remain uneventful as they did Monday afternoon.

A sign posted on the door of a Del Taco in Santee claims disrespectful students from Santana High School are causing the owner to shut down indoor dining a couple of hours a day. The sign reads:

“Due to harassment and disrespect towards the crew of this establishment from the high schoolers when school lets out at 2 pm, there will be no inside dining from 2 pm-3:30 pm when school is in session.”

The owner of the Del Taco said this has been an ongoing problem for years but it has never been this bad. Duane Johnson has owned the restaurant for 30 years and told CBS 8 in order to protect his employees who are being harassed by high schoolers, his best option is to close the doors while keeping drive-thru options open.

Across the street, just yards away from the Del Taco is Santana High School. The Santee Village is a popular place for students to hang out once school gets out. Johnson said that he isn’t the only business having trouble with the students.

“It makes me feel sad for the community. These people shouldn't have to go through that just to do their job,” said Devon Santana a father of a West Hills high schooler.

“He has friends that go to Santana so I mean it's just part of our neighborhood. It's sad to see that they have to lock the doors just to keep from being harassed as employees,” said Santana.

“I feel horrible that it does have to happen,” said Hailey Mendoza a graduate of Santana High School.

She isn’t surprised that Del Taco is closing its doors after school hours.

“I would get out of school and there would always be kids in the area causing havoc for no reason,” said Mendoza.

She remembers police getting involved with students causing trouble throughout the Santee Village.

“I've seen fights down here. I've seen them come into Starbucks, get a cup of water and just throw it on somebody. I've heard them say unnecessary rude things to people,” said Mendoza.

Grossmont Union High School District released the following statement about this ongoing issue with their students:

"Mr. Johnson is a great Santee business owner, and the Santana High School administration appreciates his dedication to the Santee community. The administration is aware of this issue and will continue notifying any students' parents that are acting in a way that is negative and disrespectful. We’ll need their partnership to help stop this behavior. The school wants to remain good neighbors and have all of our students act in a way that is respectful, positive, and appropriate."

The owner of the Del Taco said this has been an ongoing problem for years but it has never been this bad. 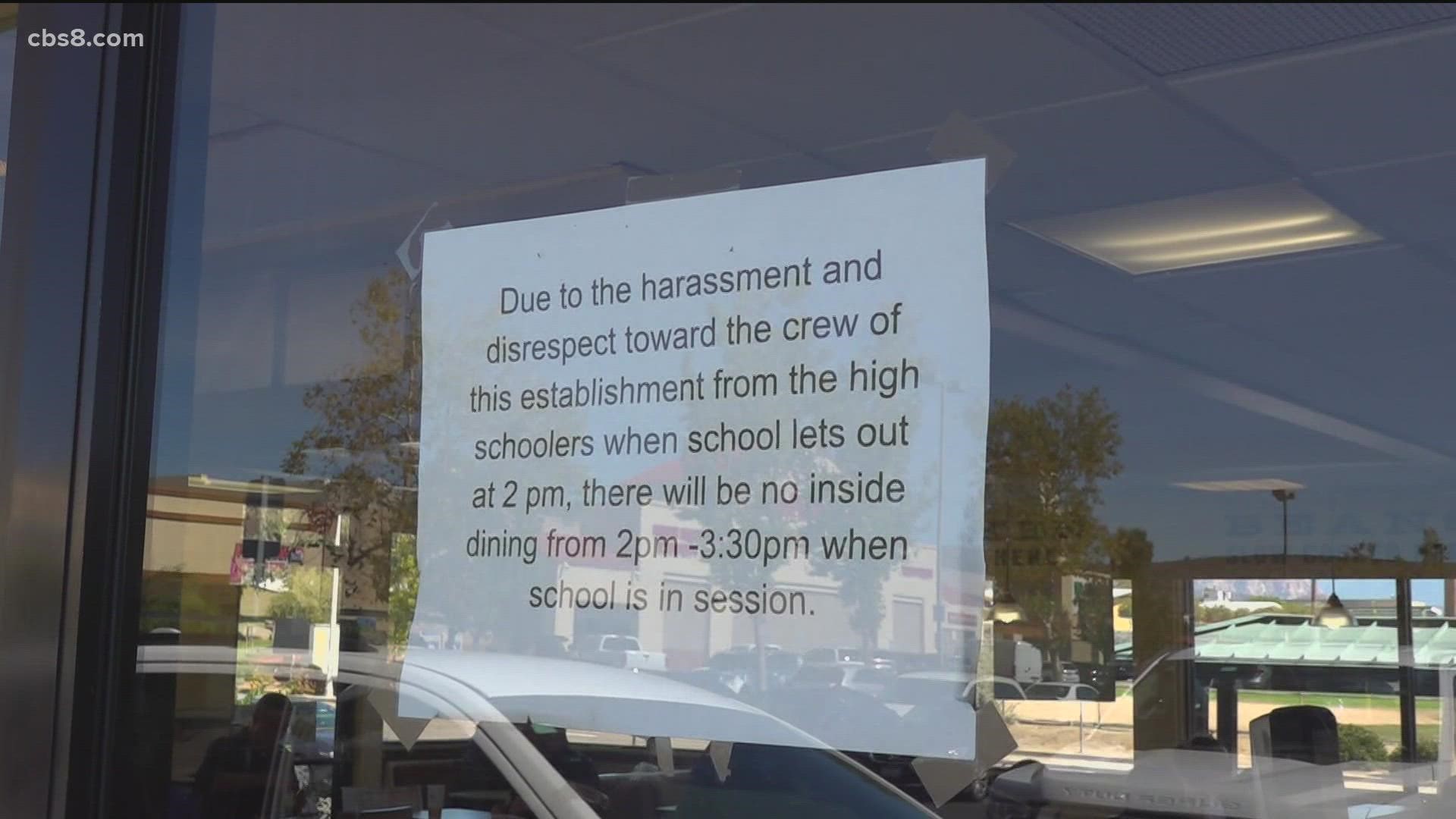