Lt. Mike Arens said the dog was taken to a nearby veterinarian and "is expected to make a full recovery." 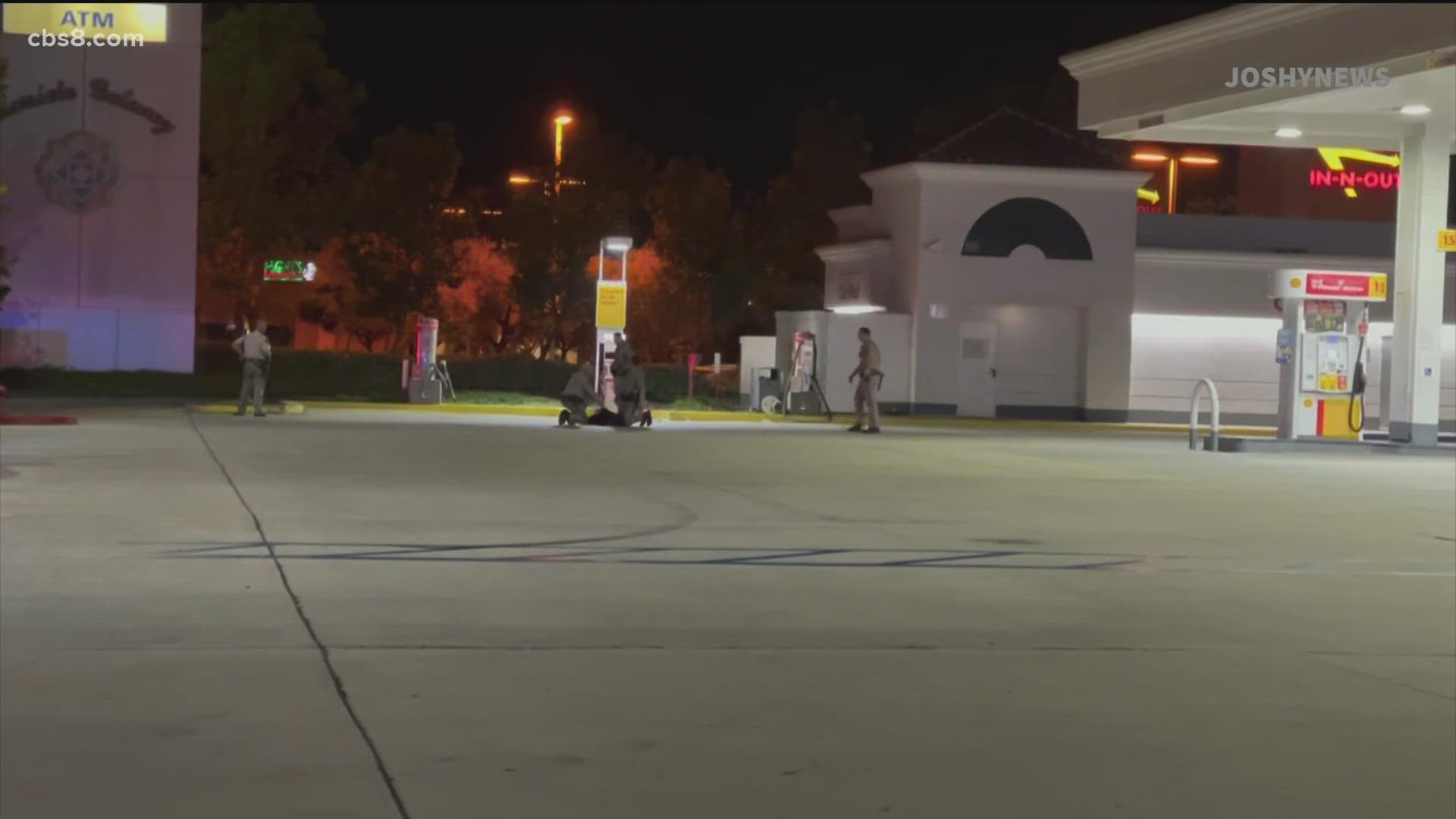 At 11:52 p.m. Sunday, a sheriff's deputy saw a suspect running out of a 7-Eleven at 10205 Lake Jennings Park Road in Lakeside. A witness told the deputy that the suspect "just robbed the store," said Lt. Mike Arens of the SDSD.

The deputy attempted to make a traffic stop, but the suspect drove away, Arens said. The deputy pursued the suspect onto westbound Interstate 8, and called the California Highway Patrol to assist.

Three suspects were in the BMW being pursued by the agencies, which transitioned onto northbound Interstate 15, 10News reported. According to the station, someone in the BMW "opened fire several times at officers during the chase."

Neither the CHP nor the Murrieta Police Department immediately replied to a request for details about the pursuit.

The BMW eventually headed into Murrieta in Riverside County before stopping at a Shell gas station with possible engine problems.

The three suspects allegedly left the BMW and tried to carjack another vehicle.

San Diego County sheriff's deputies arrived on the scene and deployed a trained dog, but one of the suspects shot it, Arens said.

The robbery suspects attempted to flee, but were caught and taken into custody.

Arens said the dog - Cezar - was taken to a nearby veterinarian and "is expected to make a full recovery."

The attempted carjacking victim was unharmed and "law enforcement officers did not return fire during the pursuit and in the confrontation at the Murrieta gas station."

The San Diego County Sheriff's Department and the CHP were investigating the incident.

On Tuesday, Sheriffs shared an update on K-9 Cezar saying he "remains in pawsitive spirits thanks to your overwhelming messages of support. Cezar is already back to his favorite activity of chasing lizards. Let’s raise the woof for his continued recovery."

Just like any doggo, he doesn’t like his meds. Solution? Yummy peanut butter.🤫 Cezar will be off duty for the next two weeks to receive tons of TLC. He’ll then return to training with his handler @SDSheriff Deputy Avedesian to warm up his leg for runs and jumps over obstacles. pic.twitter.com/eZD1puimzY

On Monday, Sheriffs shared an update on K-9 Cezar saying a vet surgeon was able to remove bullet fragments from the dog's leg and he was released before noon.

1/5 K-9 Cezar being wheeled into surgery after valiantly protecting his handler @SDSheriff Deputy Avedisian and the public following a robbery and chase from Lakeside to Murrieta. At some point, the suspects started shooting and Cezar was hit in the leg. pic.twitter.com/tSP9SFrZdM

3/5 We want to thank VCA California Veterinary Specialists in Murrieta for taking such good care of K-9 Cezar. A vet surgeon removed bullet fragments from Cezar's leg. He was released just before 11:00 a.m. Sunday, 9/6. We will provide updates on Cezar and his handler tomorrow. pic.twitter.com/WEGWs2NoWD