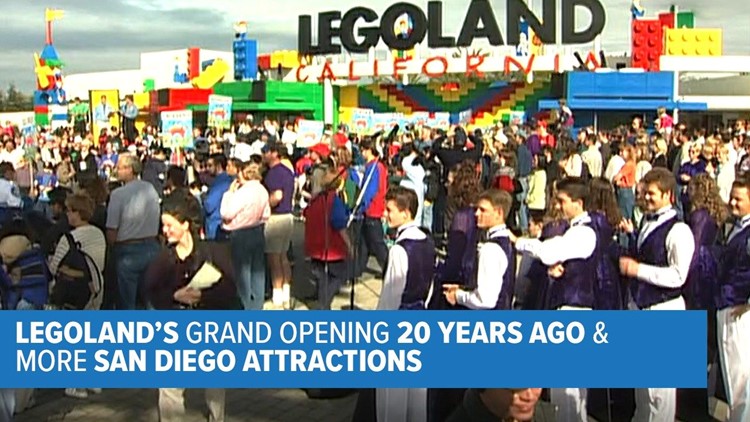 From the cost of feeding the zoo animals in 1978 to the grand opening of the first Legoland outside Europe in 1999, grab your ticket and let’s take a roller coaster ride through the past 40+ years ...
Author: Jennifer Lothspeich (Digital Content Producer), Barbara Nielsen (Archives Editor)
Published: 8:52 AM PDT March 21, 2019
Updated: 12:26 PM PDT March 24, 2019

SAN DIEGO (NEWS 8) — As many know, San Diego has its fair share of attractions for locals and tourists alike. In addition to beautiful weather and picturesque beaches, America’s Finest City is home to places like the world-famous San Diego Zoo, Legoland California, and the Giant Dipper Roller Coaster in Belmont Park.

These News 8 throwback clips explore these spots – and more - through the years.

From the cost of feeding the zoo animals in 1978 to the grand opening of the first Legoland outside Europe in 1999, grab your ticket and let’s take a roller coaster ride through the past 40+ years of San Diego attractions.

Twenty years ago this week, on March 20, 1999, Legoland California opened its gates for the first time in the Carlsbad area of North County San Diego. Kids and parents turned out in droves to check out the brand-new theme park and News 8's Kathy Chin spoke to Lego fans big and small about their favorite parts.

The world-famous San Diego Zoo was preparing for some special arrivals in the spring on 1981 and News 8 was there to find out more. Reporter Ann Shaw spoke with zoo officials about the impending addition of seven koalas from Australia. The zoo had spent $36,000 expanding facilities for the new koalas so they would feel right at home.

In the summer of 1998, News 8's Kathy Chin reported from Belmont Park in San Diego where 22 thrill-seekers were aboard the Giant Dipper Roller Coaster competing for $50,000. The contest by radio station 100.7 had evolved over the years and this iteration included having the riders stay on the roller coaster overnight with no pillows or blankets.

In the spring of 2006, News 8 got a preview of the latest happenings at SeaWorld San Diego. Reporter Heather Lucas shared info on new features coming to the park including an orca show called "Believe." The park celebrated its 55th anniversary on March 21, 2019.