In part one of this two-week Unknown Eater series, we share some of the restaurants that were deemed worthy of our secret foodie’s palate. 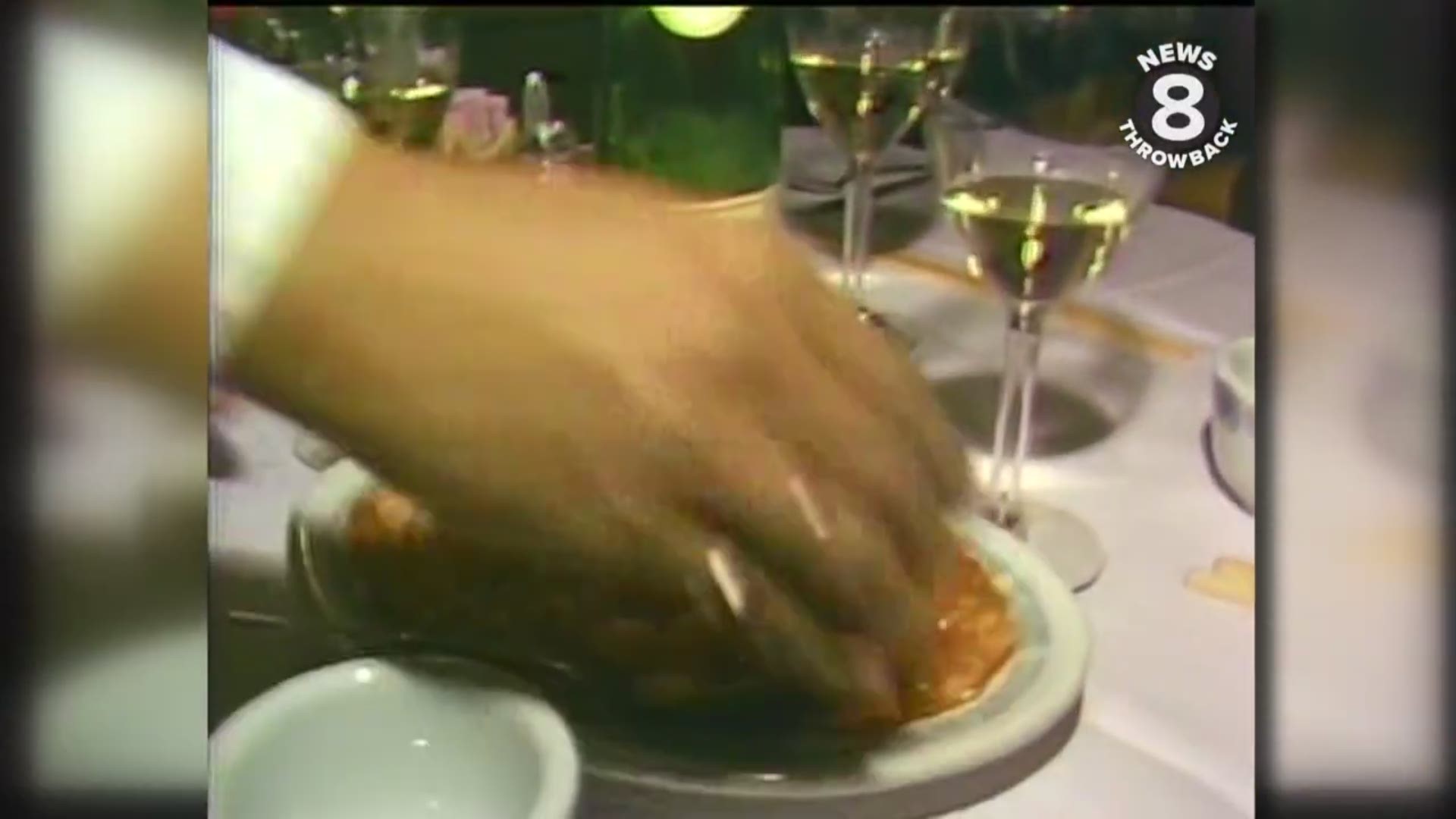 SAN DIEGO — For many years, starting in the late 1970s, News 8 presented restaurant reviews from The Unknown Eater. The mystery man or woman would dine anonymously and form their opinion about the eatery and its offerings before the segments were shot by News 8 cameras.

Over the years some of San Diego’s best restaurants got the Unknown Eater treatment. If our incognito diner liked the place it got an "Unknown Eater Approved" placard to hang on the wall – and some of them can still be spotted throughout San Diego today!

In part one of this two-week Unknown Eater series, we share some of the restaurants that were deemed worthy of our secret foodie’s palate including a couple that are still around in 2020. When restaurants in San Diego re-open you may just want to visit them - we sure will be!

We start with a clip featuring Jim Holtzman who was a beloved News 8 news director from 1978 to 1993. In this 1980 snippet, Jim explains the concept behind The Unknown Eater – which was his brainchild. [See down below for some of Jim’s memories of its inception and his time using the moniker.]

The College Restaurant on Montezuma and El Cajon Boulevard served up delicious comfort food for years. It opened in 1952 and if you went there in the late '70s or early '80s it looked like it hadn't changed much. Many of the waitresses had been there since the beginning as well. Their cinnamon rolls were incredible and the perfect treat for San Diego State students – like News 8 Archives Editor Barb Nielsen.

News 8's Unknown Eater paid a visit in 1979 and was impressed with the large portions of tender, delicious fried chicken and all the side dishes that came with it. He called it an inflation stopper where a family of three could eat for under $15. It truly was a special restaurant in San Diego and it is still missed today.

This Unknown Eater was Erik Sorenson. He was a news producer at News 8. He has had an extremely successful career. He was the executive producer of the CBS Evening News with Dan Rather and the President of MSNBC.

In this edition of News 8's The Unknown Eater from the summer of 1981, our mystery diner headed to The Old Spaghetti Factory in Downtown San Diego. Located on Fifth Avenue in the heart of the Gaslamp Quarter, the restaurant was popular every night of the week.

The Eater's first thoughts on the eatery were all about the ambiance and charming decor. But of course, the focus was the food. Back then The Old Spaghetti Factory only served spaghetti, but The Eater was pleased with the pasta which came in about a dozen varieties and was served with salad, hot sourdough bread, a beverage and spumoni ice cream for dessert. The most expensive item on the menu came in at a whopping $5.95.

The restaurant has since expanded its menu and is still going strong in 2020, although it is temporarily closed as of mid-April due to the coronavirus pandemic. We can't wait to enjoy this spot when it re-opens!

Fun fact: The Old Spaghetti Factory is located in a building constructed in 1898 which was once home to a printing company - whatever that is. ;)

One of the best eateries in San Diego can be found on the corner of First and Juniper in San Diego. It was once a small lunch counter with a dozen or so stools and was called The Juniper Grill. Today we know it as Hob Nob Hill. They will be celebrating 75 years of serving up delicious food in May 2020. Restaurants come and go but this one appears to be here to stay. Like the Unknown Eater, Jim Holtzman said back in 1981, breakfast just seems to taste better at Hob Nob Hill. Almost 40 years later, it still does. And don't forget to buy a bakery treat for later--scrumptious! As of April 2020, the restaurant is closed now for remodeling and when it re-opens, liquor will be served.

Thee Bungalow was a converted beachside cottage in Ocean Beach. It boasted an incredible wine list, reasonable prices, and perhaps the best roast duck in town. It was homey, yet fancy. And you really did feel like you were in a friend's home. The Unknown Eater said that it had been a burger joint but the menu changed in 1972. It was one of his five favorites of 1979. It served San Diegans delicious food for nearly a half-century. The Cohn Restaurant Group purchased it and in 2010 it was closed and re-opened as Bo-Beau's Kitchen and Bar.

Lehr's Greenhouse was a popular restaurant and nightclub under the freeway where Interstate 805 meets I-8. It was a restaurant inside a greenhouse. The Unknown Eater went there on January 15, 1980. It had only been open a week. Entrees ranged from $7-$15.

See below for Unknown Eater memories from some of those who wore the mantle (these entries have been edited for clarity):

"I clearly recall the genesis of The Eater. Several people from the station, including GM Bob Myers, owner Chris Meyer, people from programming, Tim Hnedak from promotion, and I, went to San Francisco for a weekend to watch a presentation for PM Magazine with the thought Channel 8 might make a deal to run it at 7 p.m. On the presentation tape, there was a segment about restaurants, not really reviews but more profiles. Watching it, I remembered reading someplace that more people in San Diego ate out per capita than anywhere else in the country. I read that while I was working at KGTV and persuaded Jack White to start a feature called Restaurant Row.

[For] Jack's reviews he'd call a place, tell them when he and the camera crew were going to arrive, show up and then marvel at the wonderful service he received. Anyway, watching the PM Magazine "audition" tape, I kinda wondered out loud, "Wouldn't it be fun to do restaurant reviews in San Diego, but do them anonymously without a camera?" I seem to remember Chris Meyer expressing enthusiasm for the idea and asking, "What would you call it?" Somehow, automatically, I said "The Unknown Eater."

When we got back to SD, I pitched it to Erik [Sorenson] because he was bright, brash and a good writer and we had to have someone who no one recognized. Erik did it till he moved on to a much bigger and better opportunity and then I took over. It was fun for a while. I'd eat meals alone, I'd eat meals with my wife, I'd eat meals with my boys. And not only did the station pay for it all, but I got an on-air talent fee because I had to be a member of AFTRA. It was great. We did the Unknown Eater's favorite breakfast places and lunches and what have you.

Unfortunately, there were those weeks when I got really busy with news stuff and it was already Wednesday and I realized, "I gotta eat out for this week's Eater!”

History lesson: I lasted till the day Ronald Reagan was shot. I happened to be in Chicago (job interview) on the day of the shooting and got a call from assignment editor Bob Sioss. He told me I was just a short a plane ride from DC and that he had booked me a flight. I got to DC, took a taxi to a hotel and ended up talking live for about three or four minutes to Marty Levin on the 11 p.m. news about "the mood" in Washington. After that, people called the station and said they heard “The Eater” talking about the Reagan shooting. No more restaurant reviews for me."

"Jim Holtzman was our brilliant, disruptive (before that was even a word) News Director and I went to him in 1978 to volunteer to 'do anything' beyond my eight-hour daily producer schedule.  He said he had this kinda crazy idea to do anonymous restaurant reviews - anonymous so that the restaurant couldn’t pour on the special service in an attempt to please the critic.  (By the way, this was years before Ruth Reichl - a vastly superior critic! - went undercover for the LA Times and then The NY Times.) It would require going to restaurants (at the station’s expense!) at night - on my time off - but think of the free food offer to a hungry 22-year-old. It would require that, plus some real cleverness, to pull it off.

Well, looking back at the pieces in the News 8 Throwback, cleverness is in short supply so I’m so grateful that Jim looked the other way and allowed me that opportunity.  By the way, besides cleverness I believe I was also quite short of taste.  And knowledge.  Many of the food types I was trying for the first time. So, during my 18-24 months as The Unknown Eater (Jim’s idea for a name too) I fell back on descriptions of atmosphere, decor and service, along with good photographers which were bountiful at KFMB in those days!"

Credit: KFMB
This placard would hang in restaurants deemed worthy of our mystery eater. Some Unknown Eater Approved signs can be seen around San Diego today!