In Friday's Zevely Zone, Jeff was invited to join the fun with Bryan to see his new installation that has a real bite. 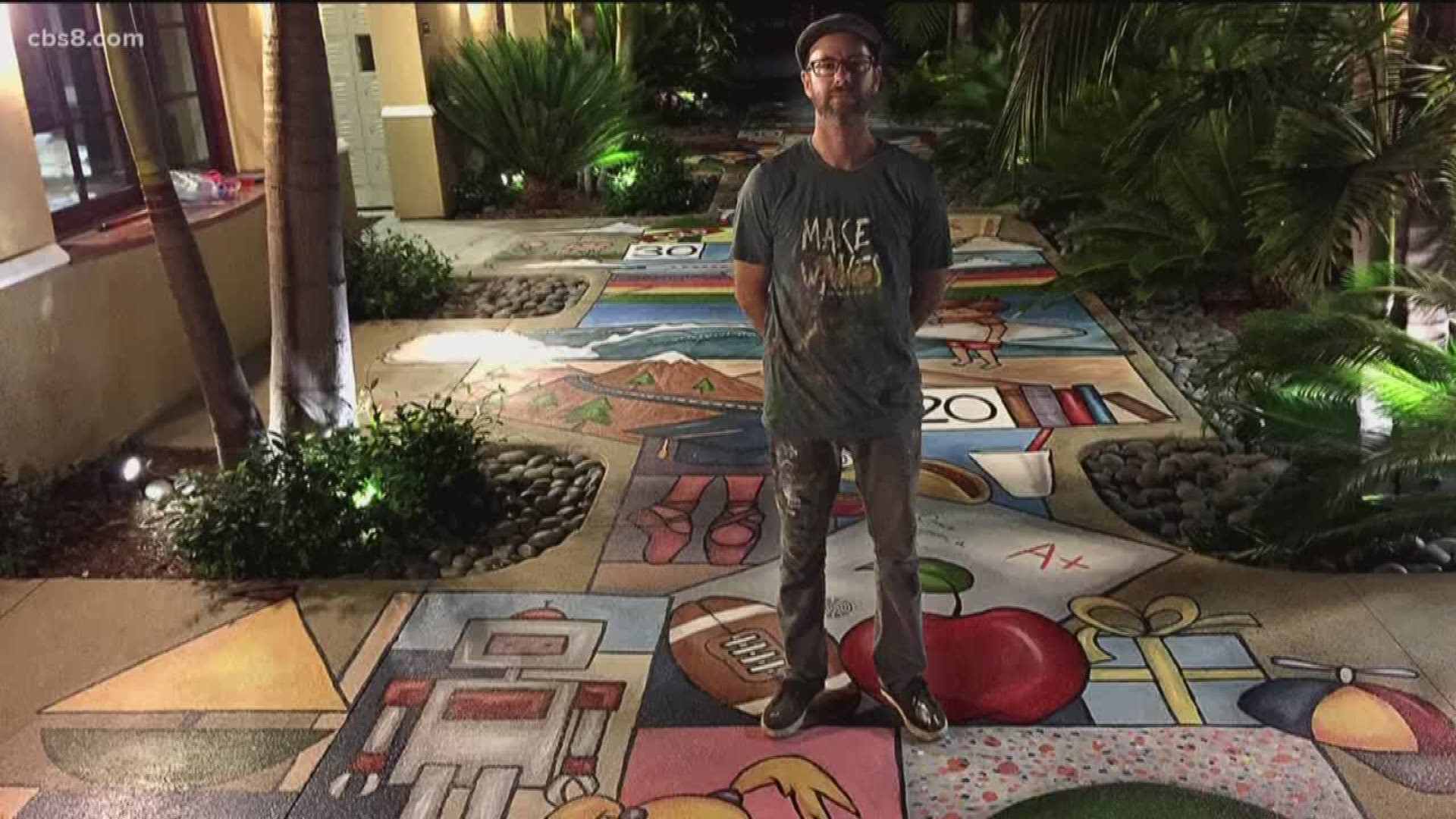 CARLSBAD, Calif. — When you're a street artist, sometimes you need to make some waves. It was on Memorial Day weekend when Carlsbad's well known street artist attacked.

In Friday's Zevely Zone, Jeff was invited to join the fun with Bryan Snyder to see his new installation that has a real bite.

Bryan Snyder grew up in the village where he's made a name for himself as an easy going mural man, but his latest project is a real summer scare. As you drive by, you'll see a young man sitting on a surfboard with his feet dangling in the water.

Behind the surfer and under the water is a huge shark on the prowl. The installation hangs on a blue construction fence on Carlsbad Village Drive just west of Interstate 5.

"Well he's looking over his shoulder, he sees this shadow, he feels this presence he sees this fin, he's not entirely stoked at this moment," said Snyder.

The art hangs on a construction fence where mixed use condos, apartments, and commercial space will soon be built which lead to one interpretation not even Bryan saw lurking: "Does the shark represent a developer? Does the surfer represent the community? Everyone has their opinion," said Snyder.

Bryan's opinion is that public art is always a deep dive into the imagination.

"The best part about this installation is that when the sun is behind the fence you get a really dark crisp shadow of the shark and the surfer's legs," said Snyder.

When most people drive by they see a fence, but Bryan sees an ocean of opportunity.

"Today we are going to transform you into a street artist are you ready?" Bryan asked Jeff.

"I have a little gift for you. Today we are going to turn you into the ZEV."

Jeff followed Bryan to his car for a cardboard cut out that reads ZEV.

"Don't you normally do this at night?" Jeff asked.

"Usually I do," responded Snyder.

"Are you going to get me busted?" asked Jeff.

Sometimes in life you have got to swim with the sharks.

"I feel like such a rebel," said Jeff while hanging the ZEV on the fence and looking over his shoulder.

Even during the shoot, Bryan thought the fun was over when a man showed up.

"Is he going to take it down right now? Is this the end of the art work? But it looks like he is just working with the electrical box we are good we are safe," said Snyder.

Knowing city officials could remove his art any day,

Bryan's the one looking over his shoulder now.

"I came out here late at night and installed it without permission but with the intent to do something positive for the community," said Snyder.

"The moment any street artist puts art into the streets it's no longer yours it's community's, that's at least how I see it."

This from an artist whose just scratching the surface and promises to strike again.

"You know I couldn't stop doing this even if I tried," said Snyder.

If you'd like to see what Bryan Synder is cooking up next go to his Instagram page.