100-year-old Phebe Burnham is twice as old, smart, thoughtful and talented than Jeff 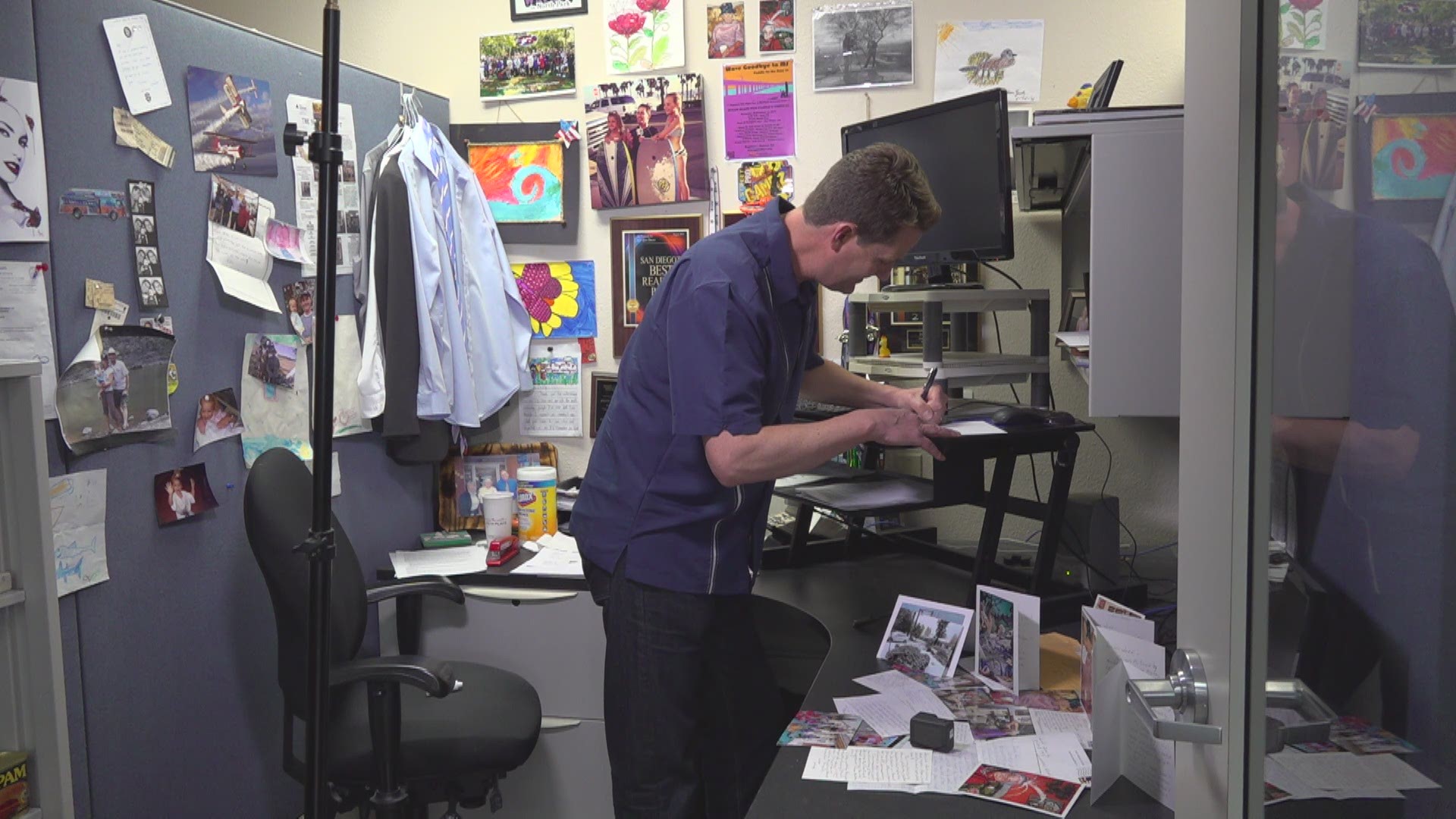 DESCANSO, Calif. — Two years ago, I went to Descanso to do a feature story on an award winning artist. That story was the start of a new friendship and lead to a pen pal. This follow up report started in my office at KFMB Stations.

I wrote a letter that read, "Dear Phebe, Your letters and post cards bring me great joy." I usually mail my letters to my pen pal Phebe Burnham but this time, I decided drive it to her home to share a cup of tea with my friend who is turning 100 years old in July.

Phebe has sent me dozens of letters and cards and it has made me ponder how taking the time to put pen to paper is becoming a lost art. Phebe was waiting for me in her front yard. "Good to see you," she said with a big smile. When I featured Phebe two years ago in the Zevely Zone, she showed me a box filled with awards. "That's a People's Choice. This is from Steamboat Springs," she told me. Phebe has won so many ribbons there are many she never took the time to unwrap to which she said, "Oh dear." Her art is incredible and she works on it everyday.

As I mentioned, Phebe has written me dozens of cards and letters. I've kept and treasured everyone but when I went to her home I told her, "I was hoping that you had my letters pinned on your refrigerator."  Sadly I was wrong.

Phebe said not to worry she kept my correspondence in a safe place. She started rifling through old boxes and folders and announced, "You are not here."  As for keeping my letters in a trusted place, "Oh dear, I don't," she said.

Phebe is turning 100 years old. I don't blame her for loosing track of my letters. I am turning 50 years old this year and I just forgot to pay my own cable bill. I can't imagine what I'll be losing track of in 50 years.

Phebe often writes me to comment that I wasn't on TV. "They didn't want you this week, oh dear," she chuckled. I'm not sure this hard working artist ever took a vacation. She not only watches News 8 daily she keeps score.  "Sometimes you are not on on Mondays," she said. I told her, "I know." To which she added, "Sometimes your not on on Fridays as well."

I guess a true artist never takes a day off. Phebe's home is filled with art and laughter. She sure got a chuckle out my selfie stick that I brought to her home. Fads come and go but making friends never grows old and it was time for her to read my card.  I asked her to read it out loud, "You are not only twice as old as me, but twice as talented, twice as funny and twice as thoughtful, thank you for writing so often and being my pen pal," she read. Her eyes then lit up as she smiled and said, "Thank you, I'll frame this and put it on my refrigerator! I am from New England and we always write letters. Forever and ever amen."

I guess I just wanted you to meet my pen pal. Phebe turns 100 years old in July and will celebrate her life and art at Sophie's Gallery in El Cajon.

If you are interested in contacting Phoebe for a painting, you can email her at phebecb@gmail.com.