In Monday's Zevely Zone, Jeff went to Oceanside to draw a line in the sand and see if the claims made by CGear Sand-Free Towels were true. 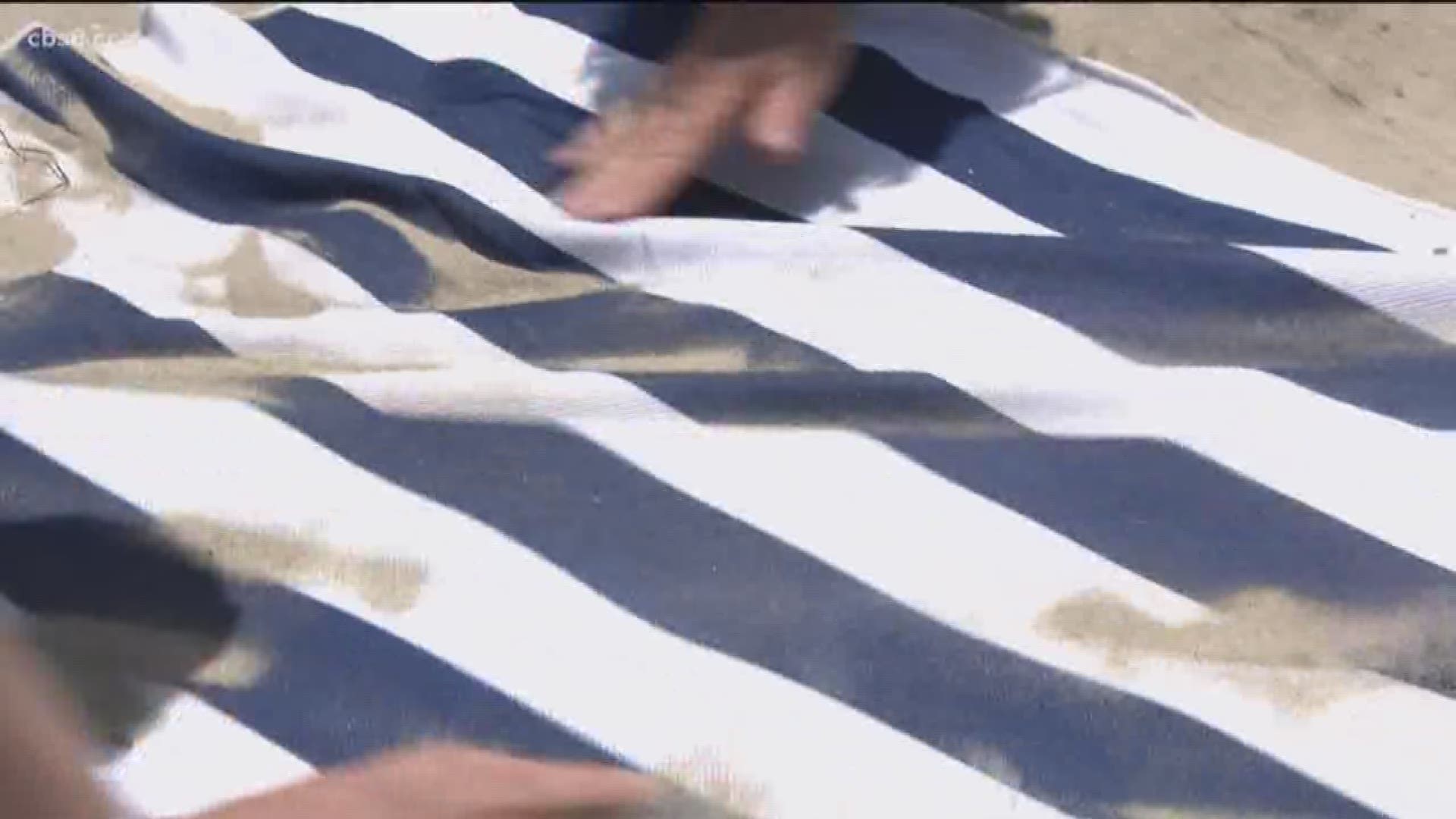 SAN DIEGO — If you think a sand-free beach towel is too good to be true, you're not alone.

In Monday's Zevely Zone, Jeff went to Oceanside to draw a line in the sand and see if the claims made by CGear Sand-Free Towels were true.

This story for Jeff started with an email from the company and a promotional video by CGear that showed a family at the beach loving life with brand new sand-free towels. Jeff told the company to send him a couple of towels and promised to test them out at the beach.

Just so you know, Jeff does not do a lot of product reviews in the Zevely Zone but a sand-proof beach towel grabbed his attention.

When his kids were young, a sand-free towel would have come in handy. Let's face it, towels are sand magnets, which is why just the mention of one being sand-free made Nicole, a mother from Arizona, say, "No, impossible."

Nicole was skeptical like Jeff. But she was willing to give it a try. Her son Grayson dumped a bunch of sand on the towel and what do you know?

"Wipe it off. Hey where did it go? It's like a magic trick," said the beach bystanders.

Nicole only shook the towel.

"Does that work? Because I don't like to even touch the sand so, you can do it that way too, that works great," said Nicole.

Her daughter Maddie was next and again the sand disappeared.

"I don't even know what to say it's like perfect for the beach," said Maddie.

By the looks of it, the towel may soon be mopping up.

"So what is the science behind it? How is it sand free?" asked another beach goer.

The company CGear says their trick is a dual weave fabric and they have patent.

"All CGear products are designed with our patented dual layer design. A quick sweep of the hand and unwelcome sand filters through two layers of durable, water-resistant weave. A second bottom layer prevents all the dirt and dust from resurfacing, so you can get on with your sand-free fun. Originally developed for helicopters, CGEAR's patented dual-layer weave ensured protection from dust clouds and wayward grit during landing. Now, that same technology has been cleverly adapted for everyday use. The straightforward utilitarian design works to ensure sand and dirt end up exactly where they belong: on the ground. We want every part of the outdoors to be enjoyed, not endured. With a simple sweep of the hand, sand filters through two layers under the mat - where it stays. From sea level to serious altitude - whatever adventure you have in store - you can always make yourself at home on a CGear mat."

Back at the beach, Jeff continued his towel test.

"You ever heard of a sand free beach towel?" Jeff asked countless people.

Their responses: "No, I guess I have now."

She answered, "I think so."

That is until Jeff told her the sand is not going home with Nicole, but the towels were.

Her kids wrapped up in the towels (sand-free of course) and offer a big thumbs up.