Man who did voice of 'Charlie Brown' pleads not guilty to stalking, threat charges

Oceanside resident Peter Robbins, the voice of Charlie Brown in several Peanuts films and television specials, was in custody in San Diego Wednesday on suspicion of one count of felony stalking and 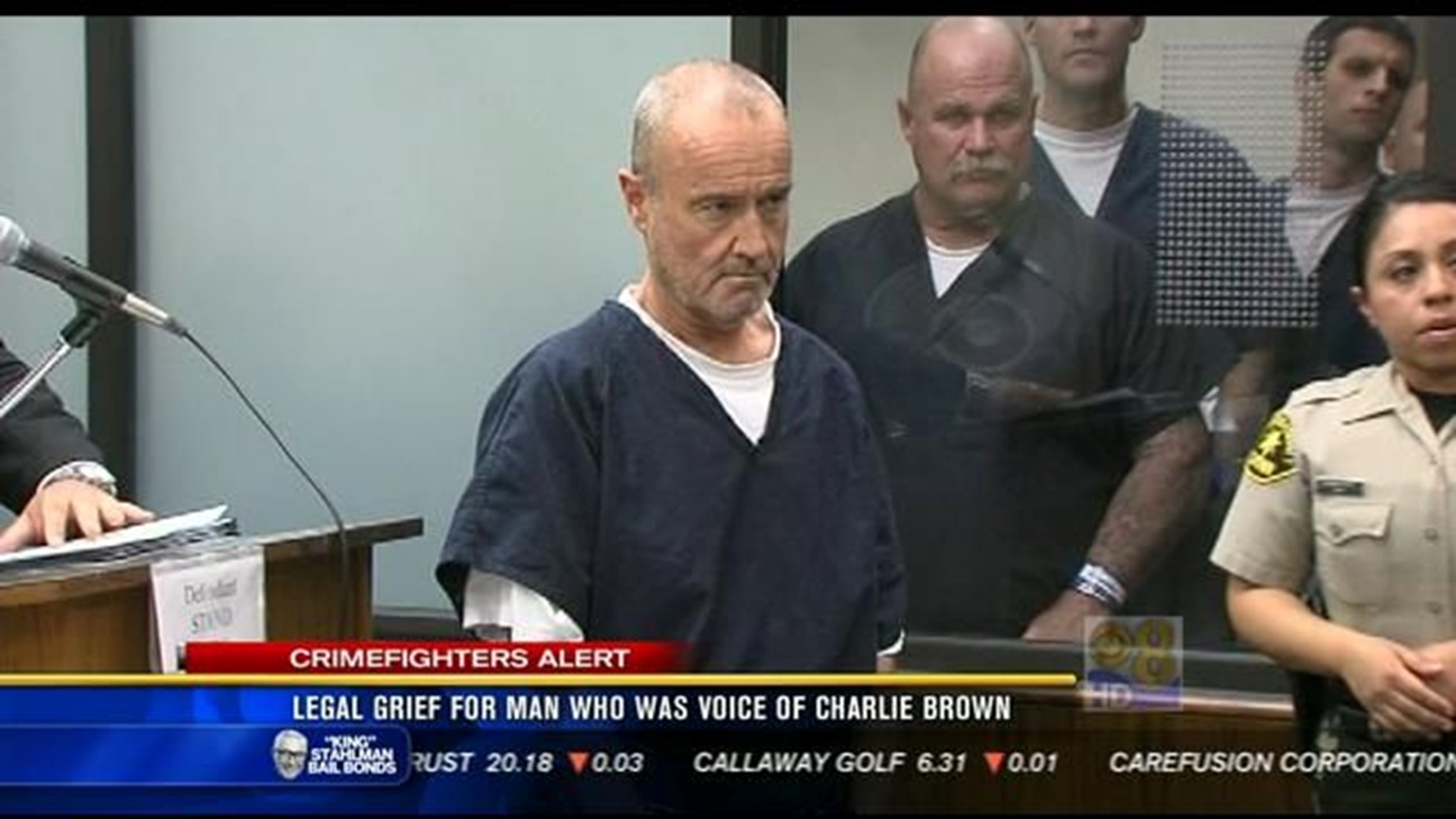 SAN DIEGO (AP) — The man who was the voice of Charlie Brown in several "Peanuts" television shows was charged Wednesday with stalking and threatening his former girlfriend and a plastic surgeon who gave her a breast enhancement he apparently didn't like.

Prosecutors said the 56-year-old voice actor best known for his portrayal of Charlie Brown on the TV special "A Charlie Brown Christmas" repeatedly threatened his former girlfriend, calling her as many as 37 times in a 24-hour period on her cellphone and telling her he would kill her and her son if she did not give back his dog and car.

Prosecutors said he also threatened the plastic surgeon in the coastal city of Carlsbad, calling her office so many times she moved to a hotel temporarily out of fear for her life and hired an armed guard outside her clinic. Authorities said Robbins paid for the breast enhancement and was demanding his money back after they broke up, according to the criminal complaint.

On Dec. 31, Robbins allegedly confronted his former girlfriend in a hotel room, beating his dog and telling her he would not stop hurting the animal and would kill her if she did not get a refund for the surgery, Deputy District Attorney Elizabeth McClutchey told the judge in arguing that bail be increased to $550,000. McClutchey said he then grabbed his ex-girlfriend by the neck and shoved her against the door before fleeing.

Prosecutors also told the judge that Robbins had recently purchased a gun and had been practicing at a shooting range. San Diego Superior Court Judge David M. Szumowski agreed to up the bail from $50,000 to $550,000.

Robbins was arrested Sunday at the San Ysidro Port of Entry after authorities doing a background check upon his return from Mexico spotted a warrant from the San Diego County Sheriff's Department.

Defense Attorney Marc S. Kohnen told the judge the bail was set too high for a man with no prior criminal record, who has lived in San Diego County for 30 years and whose work is watched by so many children to this day. He called him a "distraught man" and said "this is not a stalking case" but declined to comment on what led to his arrest.

"Mr. Robbins is an eccentric individual," Kohnen told reporters after the arraignment. "He's not a threat to society."

If convicted, he would face a maximum sentence of up to nine years in prison, prosecutors said.

SAN DIEGO (CNS) - Oceanside resident Peter Robbins -- the voice of Charlie Brown in several Peanuts films and television specials -- pleaded not guilty Wednesday to charges that he threatened his girlfriend and the doctor who performed her breast enhancement surgery.

The defendant -- who's being held in lieu of $550,000 bail -- faces up to nine years in prison if convicted of two counts of stalking and 10 counts of making criminal threats, said Deputy District Attorney Elizabeth McClutchey.

Robbins, 56, was taken into custody Sunday night, coming back into the United States from Mexico, after authorities learned of a warrant for his arrest.

McClutchey urged Judge David Szumowski to keep bail set at $550,000 because it was the alleged victims' perception that Robbins was a "desperate man" and "had nothing to lose."

The prosecutor also said Robbins had purchased a gun but had not yet received it, and had practiced firing a gun at a shooting range.

According to a declaration in support of the arrest warrant, Saltz told authorities that Robbins had paid for the surgery and follow-up appointments.

Kern, of Los Angeles, told authorities she was staying at a hotel in Carlsbad when she was involved in a domestic violence incident with Robbins, in which he allegedly grabbed her by the neck and demanded that she go with him to get back the money he paid for her breast enhancement surgery.

Kern said her relationship with Robbins ended after that, and he began calling Saltz's office demanding his money back, according to the court document.

McClutchey said Saltz stayed at a hotel because she was fearful of Robbins, and also hired an armed guard for her business.

The prosecutor alleged that Robbins left several threatening phone messages for Kern, saying in one, "You better hide Shawna, I'm coming for you. I'm going to find you in Sun Valley or wherever the (expletive) you live and I'm going to kill you."

In an uncharged incident, Robbins allegedly threatened to kill a police sergeant who arrested him on Jan. 13, McClutchey said.

Robbins was released on bond the next day and was given a Jan. 28 court date, which was pending when he was arrested Sunday at the border.

Defense attorney Marc Kohnen said Robbins' bail was excessive because his client had no criminal record and had never been in trouble with the law before.

"Mr. Robbins is an eccentric individual but he's not a threat," the defense attorney said.

A bail review was set for Jan. 28, a readiness conference for Feb. 22 and a preliminary hearing for March 22.