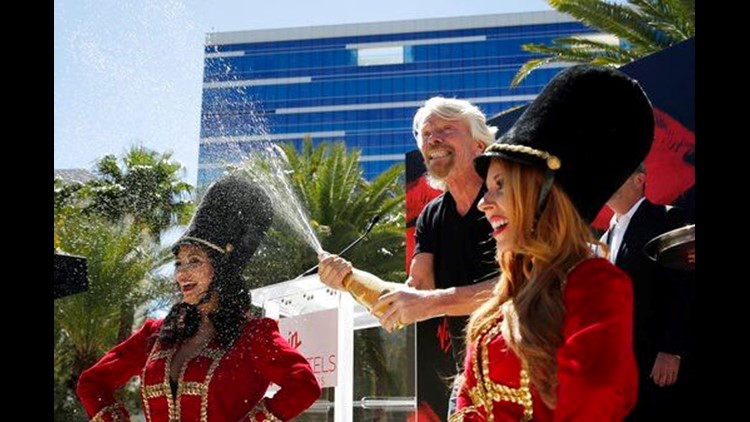 LAS VEGAS (AP) — The Hard Rock Hotel and Casino in Las Vegas will be overhauled over the next several months following its purchase Friday by billionaire Richard Branson.

The property with about 1,500 rooms and suites off the Las Vegas Strip and eventually become Virgin Hotels Las Vegas. It will continue to operate under the Hard Rock brand through the end of 2019, when the renovations are expected to be completed.

"Virgin is all about fun, entertainment, not taking ourselves too seriously," Branson said. "Virgin Atlantic has had a lot of fun flying tons of people to Las Vegas from Britain for many years. Virgin America has done the same, and we wouldn't have just come to Las Vegas unless we could've found the property that was very Virgin, and I think that's what we've achieved."

The 23-year-old property will remain open during renovations, which will take place in multiple phases. The company said it will invest "hundreds of millions of dollars" to transform the property, but it was not immediately clear whether the hotel-casino will keep its current entertainment venues, including a popular dayclub.

The property will retain its casino floor, which will be managed by a partner. Some of the large rock memorabilia that the Hard Rock casino-hotel owns may go to storage.

"The guitar may not survive," Branson said referring to a massive guitar outside the hotel. "But we have a giant 'v', which is sort of guitar-shaped, which may take over."

Virgin Hotels purchased the property with a group of partners, including Los Angeles-based investment firm Juniper Capital Partners. The terms of the purchase from Brookfield Asset Management were not disclosed.

Branson, who has previously rappelled down a casino-hotel and got on a jet ski on the fountains outside the Bellagio casino-resort to promote his businesses, promised an "equally fun" event for the hotel's official launch.

The leader of the Culinary Union, which represents more than 50,000 casino-hotel workers in Las Vegas, said Brookfield and Virgin Hotels have agreed to a process that will ensure management remains neutral as employees choose whether to unionize "without management interference, harassment, surveillance, bullying, or litigation."

"This is a new era of positive labor-management cooperation at the Hard Rock Las Vegas," Geoconda Argüello-Kline, the union's secretary-treasurer said in a statement.

Branson has run a number of businesses under the Virgin brand, including records, airlines, wireless carrier and a commercial space venture.