State law mandates search warrants be "open to the public as a judicial record." 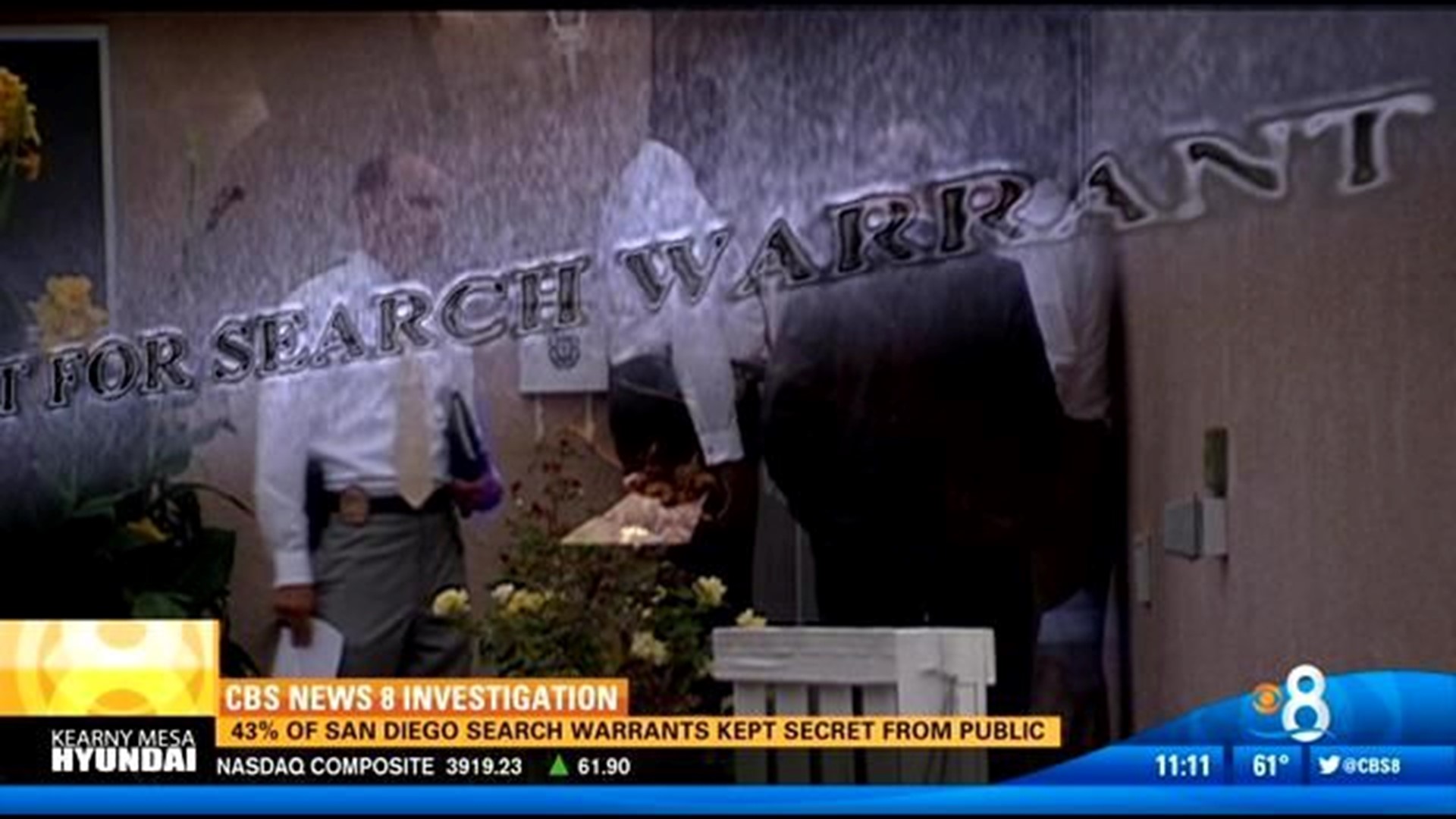 SAN DIEGO, Calif. (CBS 8) -- Almost half of local search warrants authorizing officers to enter homes and seize private property are blocked from public scrutiny, despite state law mandating the records be open to inspection after the warrant is executed.

At the San Diego County Superior Court downtown, judges seal 43% of search warrants in advance of the warrant being served, according to a CBS News 8 review of the court's search warrant records.

Even after officers execute the search warrants, the records remain sealed indefinitely, in most cases forever, because there is no process in place to assure legal review of the sealed records.

"It's very surprising and disturbing that such a large number search warrants and judicial records are being kept from the public," said David Loy, attorney with the American Civil Liberties Union of San Diego & Imperial Counties.

Loy said it makes sense that search warrants are kept secret before they are executed. For obvious reasons, officers do not want the target of a criminal investigation to be tipped off that his property is about to be raided.

For that reason, under California Penal Code 1534(a), "(R)ecords of the court relating to the warrant need not be open to the public until the execution and return of the warrant."

However, once officers execute a search warrant and evidence is seized, the circumstances change and the target of the investigation generally becomes aware that he is under suspicion.

By state law, it is the execution of the search warrant that triggers public disclosure of the probable cause officers had to raid the home and seize property in the first place.

According to Penal Code, "Thereafter, if the warrant has been executed, the documents and records shall be open to the public as a judicial record."

"Once the search has been completed, once the police have searched the house, searched the car, searched the cell phone, obtained the fruits of the warrant; at that point the law says that the search warrant is presumptively open to the public so that the public can monitor law enforcement and hold it accountable," said ACLU attorney Loy.

But in San Diego County, that's not always happening.

Over the years, thousands of local search warrants have been kept secret from the public.

In California, judicial records can only be sealed if there is a compelling interest that overcomes the right of public access. An overriding interest, for example, could be the privacy of a sexual assault victim whose name appears in the search warrant.

The sealing order also must be "narrowly tailored." So, rather than sealing an entire search warrant related to a sexual assault investigation, a judge may redact the name of the victim and release the rest of the warrant to the public.

"There are a lot of good reasons why search warrants are sealed," said Dumanis.

"They are sealed because either there's an ongoing investigation, a victim or witness is at risk, there are confidential informants, or in sex crimes," Dumanis said.

In the case of convicted murderer and rapist John Gardner, news organizations fought to get search warrants unsealed.

The warrants showed a police officer had detained and questioned Gardner on suspicion of stalking a woman in Escondido, two months after he murdered Escondido teenager Amber Dubois.  Gardner was released with a traffic citation and later murdered Poway teen Chelsea King.

And recently -- in the case of Lakeside teenager Hannah Anderson – unsealed search warrants revealed detectives had found used condoms, and letters written by Anderson herself, inside the home of the girl's alleged kidnapper, James DiMaggio.

In San Diego County, judges usually seal search warrants in advance of the warrant being executed. Typically, a judge is contacted in chambers or over the telephone by an officer and/or prosecutor with a request to sign off on the search warrant's probable cause statement, and to issue a sealing order.

As noted above, the search warrants remain sealed forever, unless a defense attorney, outside party, or news organization challenges the sealing order at a later date.

"We want to be transparent as possible, and so now we have become aware that there are a lot of cases that don't ever get unsealed," said DA Dumanis. "We have not, until you pointed it out, really realized that there was an issue."

After reviewing the results of CBS News 8's investigation, Dumanis said she has initiated a policy change in her office that may help get some search warrants unsealed.

"The policy that we're looking at is more of a presumption to unseal so long as there's no good reason to keep it sealed," said Dumanis.

Dumanis said prosecutors will now initiate motions to unseal search warrants in cases where charges have been filed, and preliminary hearing evidence has already been presented in court.

"We are looking at a policy where we will step forward and ask to have (the warrants) unsealed at the earliest possible time," Dumanis said.

Still, the DA's new policy change would have no effect on sealed search warrants associated with investigations where no criminal charges have been filed.

"Let's say the police do a search and decide not to file charges. Then, the press and the public also have a right to know why (officers) conducted that search," said ACLU attorney Loy. "Why haven't charges been filed? Did they mistakenly target an innocent person?"

Loy said procedures should be put in place by the Superior Court to assure the public has access to records.

"I think the burden is on the court to figure out a way – and it can be low tech or it can be high tech – to implement this rule so warrants become presumptively open to the public," he said.