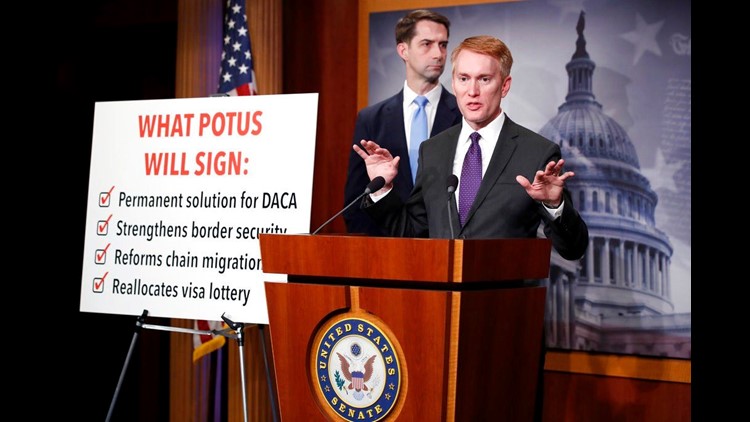 WASHINGTON (AP) — A high-stakes Senate debate over immigration got off to a halting start Tuesday, with Republican and Democratic leaders immediately at loggerheads over how to move forward and President Donald Trump warning this was the "last chance" to extend protections to "Dreamer" immigrants.

Trump issued the warning in a morning tweet as the Senate opened what was billed as an unusual and open-ended debate on a host of immigration issues. Democrats had pushed for the debate, hopeful they might be able to craft a piece of legislation in real time on the Senate floor — or at least force Republicans on the record on some difficult issues.

But the experiment in legislating hasn't gotten very far yet.

Senate Majority Leader Mitch McConnell, R-Ky., began the process by throwing his weight behind legislation based on the president's priorities.

To kick it off, he proposed allowing Republicans to bring up an amendment targeting cities that don't fully cooperate with federal immigration authorities, so-called "sanctuary cities." Then, Democrats would bring up legislation of their choosing. Amendments gaining 60 votes would become part of the broader immigration bill.

"To begin the debate as the Republican leader suggests would be getting off on the wrong foot," Schumer said. "Very partisan."

His reasoning: The legislation Schumer wants considered would address the population of young immigrants that lawmakers from both parties say they want to help, rather than side issues such as how to deal with sanctuary cities.

The disagreement means there could be several more hours of speeches before any votes occur. That gives a group of moderate lawmakers more time to come up with a package that could generate 60 votes in the Senate.

"Until we reach an end there, I still hope that's the vehicle," said Sen. Jeff Flake, R-Ariz., one of the group's key participants.

"Wouldn't it be great if we could finally, after so many years, solve the DACA puzzle," he wrote, adding: "This will be our last chance, there will never be another opportunity! March 5th."

Trump was referring to a deadline he announced last year to end a program protecting young immigrants from deportation, formally known as Deferred Action for Childhood Arrivals, or DACA. But a recent court ruling has rendered that deadline all but meaningless.

In an exchange later Tuesday with Sen. Sherrod Brown, D-Ohio, Trump again tried to accuse Democrats of not wanting to fix DACA, but then told the senator he was joking.

"Everybody's in there working hard on it right now. I think we have a chance to do DACA very bipartisan. I think that can happen," he said during a meeting on trade issues with a bipartisan group of lawmakers at the White House. "And I hope we're going to be able to do that, senator."

One GOP proposal based on principles dictated by the White House would pave a path to citizenship for up to 1.8 million young "Dreamer" immigrants in the U.S., a lure for Democrats that many Republicans oppose.

Trump also wants $25 billion for Trump's border wall with Mexico and other security measures, as well as curbs on legal immigration — a must for many Republicans.

"This proposal has my support, and during this week of fair debate, I believe it deserves the support of every senator who's ready to move beyond making points and actually making a law," McConnell said in beginning Senate debate Tuesday.

McConnell and other GOP supporters describe the measure as the Senate's best shot of passing a bill that the president will sign, but many Democrats consider some of the proposals, including limiting the relatives that legal immigrants can bring to the U.S., to be non-starters.

"Helping the Dreamers become Americans and protecting our borders. That should be the focus of all our energies," Schumer said Tuesday.

Trump's overall immigration plan, opposed by many Democrats, stands little chance of prevailing because any measure will need 60 votes. That means proposals will need substantial bipartisan support since the GOP majority is 51-49, and Sen. John McCain, R-Ariz., has been absent in recent weeks battling cancer.

Still, many Republicans are insisting that the bill incorporating Trump's priorities is a compromise because it gives up to 1.8 million young immigrants a pathway to citizenship.

"The president's framework is not an opening bid in negotiations. It is a best and final offer," said Sen. Tom Cotton, R-Ark.

In a meeting with sheriffs at the White House, Trump continued to frame the debate in a way that depicts many of the illegal immigrants seeking to enter the U.S. as dangerous criminals.