"There’s been a lot of misinformation and straight-up lies about SB 145," said California State Senator Scott Wiener of San Francisco. 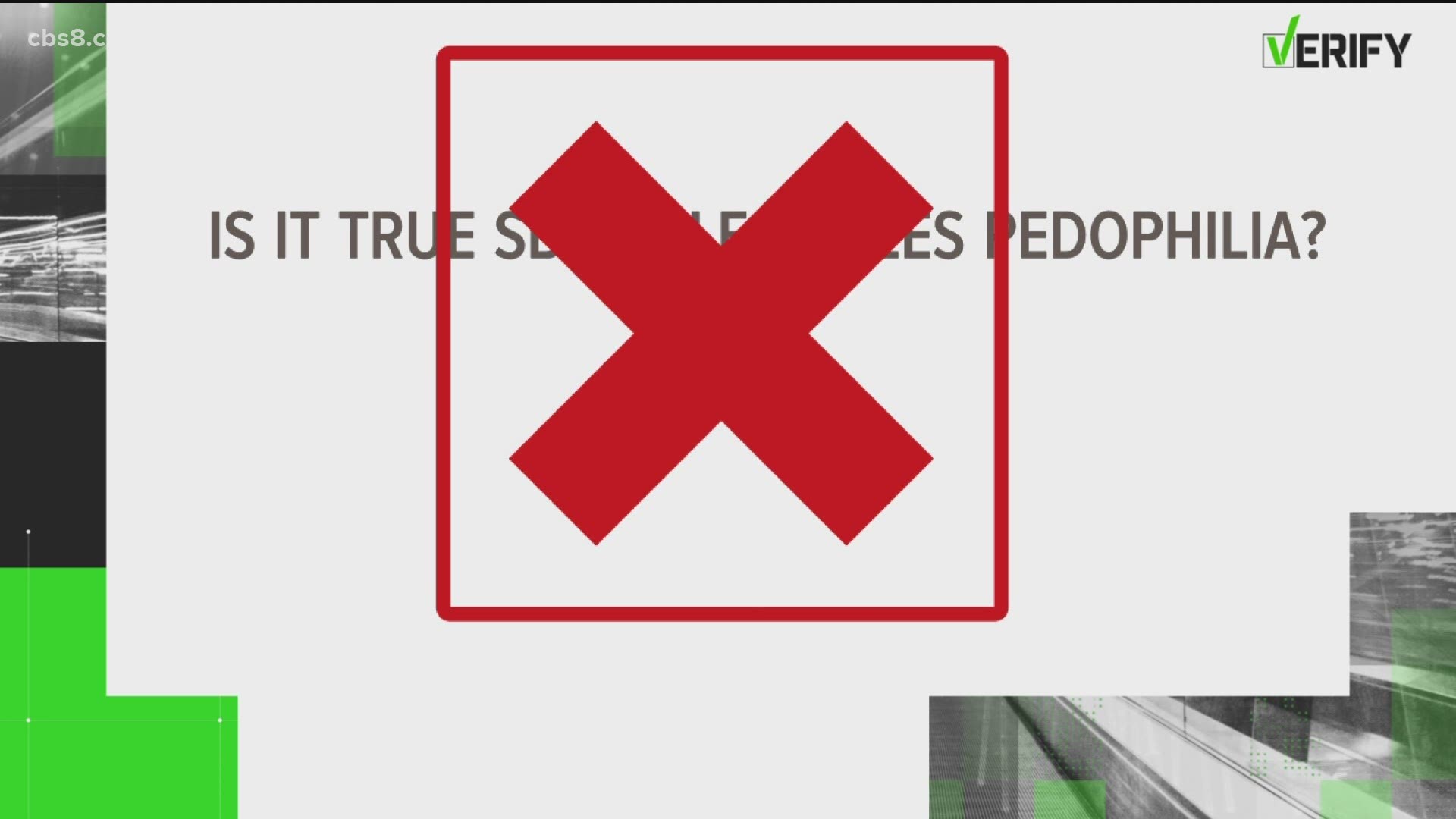 CALIFORNIA, USA — Senate Bill 145, recently signed by Governor Gavin Newsom, is getting a lot of attention on social media. Even San Diego Mayor Kevin Faulconer tweeted about this bill over the weekend.

As a parent I’m appalled that last night our governor signed a law maintaining a 24-year-old can have sex with a 14-year-old and it not be considered predatory.

An adult who commits ANY sex act on a minor 10 years younger must be registered a sex offender. Law must be changed.

There are claims it would end felonies for child rape and legalize pedophilia in California.

Here's what the bill states:  "This bill would exempt from mandatory registration under the act a person convicted of certain offenses involving minors if the person is not more than 10 years older than the minor and if that offense is the only one requiring the person to register."

So what does that mean?

Under current California law, statutory rape is treated differently depending on what type of penetration occurred.

"Let’s say you have a situation where you have an 18-year-old and 16-year-old who are dating each other," said Senator Wiener. "If they are having vaginal intercourse, say it's a boy and a girl and they’re having vaginal intercourse, it is statutory rape but the judge does not have to put the 18-year-old on the sex offender registry. The judge can look at the facts of the case and say 'Is it appropriate? Is this person a danger?'"

"If it is two boys or two girls, an 18-year-old and a 16-year-old, and they’re having say oral sex or sex other than vaginal-penile intercourse, the judge must put the 18-year-old on the sex offender registry no matter what. The judge has no discretion," Wiener said.

"All this bill does is to say, when we decide who has to go on the sex offender registry once you’ve been convicted, that we will treat LGBTQ young people exactly the same way that we have treated straight young people for the last 76 years," he said.

"What this bill does is it expands the type of sex that is covered," said legal analyst Wendy Patrick.

"Adults having sex with minors in California is illegal. This bill does nothing to change that. It is about [sex offender] registration not decriminalization," said Patrick.

"It is a totally made up, false claim," said Senator Wiener. "This bill does not in any way change what is legal and what is illegal. Something that is statutory rape right now will remain statutory rape. If the punishment is over many years in prison the punishment remains the same."

Is it possible a judge could rule that a 24-year-old man convicted of having sex with a 14-year-old girl doesn't have to register as a sex offender?

"Today, existing law for 76 years is that if you have a 24-year-old man who has vaginal intercourse with a 14-year-old girl the judge since 1944 has had discretion on whether or not to put that person on the sex offender registry that is existing law, since World War II. And to my knowledge no one has ever complained about it," said Senator Wiener.

"Even if one thinks you should reduce the 10 years for everyone to nine or eight or seven or six or five years, that’s a legitimate discussion to have, but that is separate from having equal treatment for LGBTQ people," he added.

He tells News 8 its far-right groups and fans of QAnon, a conspiracy theory, who have been spreading misinformation about the bill.

"This bill has really been a political hot button," said Patrick. "it has received both bi-partisan support and bi-partisan backlash. However this bill isn't about politics, it's about parity in sentencing."

Yes. News 8 reached out to all three groups who confirm they support it.

Despite misinformation, this bill does not legalize ANY crime against a child – SB 145 still maintains the SAME criminal punishments under current law. https://t.co/x8Iz9J7qwA