On the same day that Gov. Newsom announced a plan for youth sports to return, a judge ruled in favor of a lawsuit filed by two San Diego athletes. 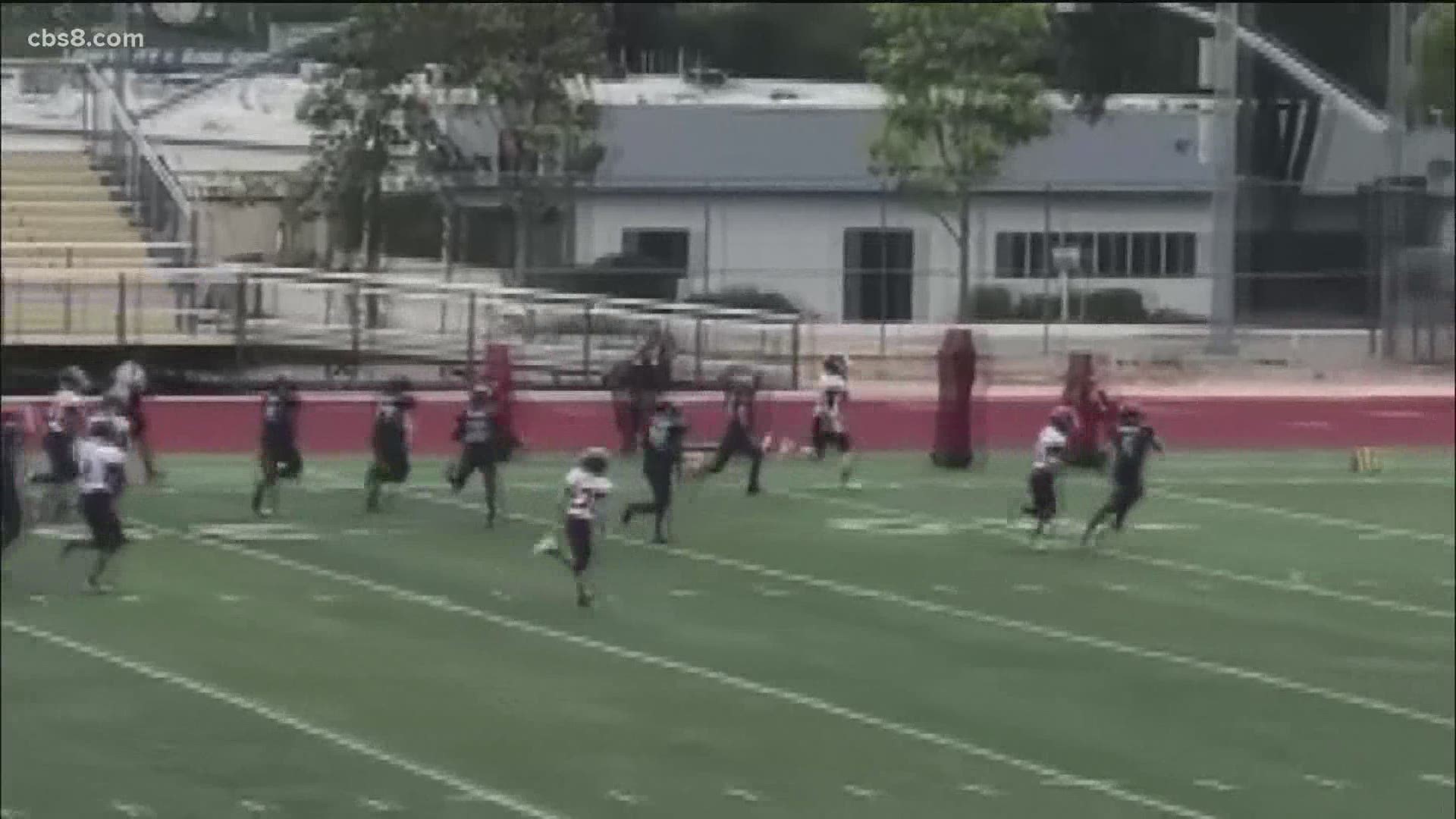 SAN DIEGO — A judge today cleared the way for youth sporting activities including football and basketball to resume in San Diego County, hours after the state revised its guidelines to allow the activities in counties with relatively low rates of new COVID-19 cases.

However, through a lawsuit recently filed by two San Diego-area high school athletes, a judge on Friday granted a temporary restraining order allowing high school and youth sports to resume in San Diego County "as long as the(y) follow the same or similar COVID-19 protocols imposed for competition in professional and/or collegiate sports within the county."

Marlon Gardinera, is the father of one of the football players who filed suit. He is also the Scripps Ranch football coach who helped lead the "Let Them Play" effort to allow youth sports.

"Overjoyed, disbelief, surreal, excited, nervous," said Gardinera about the ruling.
"It does feel good to have a judge for you. And quite frankly, I'm even grateful to Governor Newsom."

San Diego Superior Court Judge Earl H. Maas III, who heard arguments Friday afternoon from attorneys representing the state, county and the two student athletes, agreed with the plaintiffs in his written ruling that young athletes were not at greater risk of contracting or transmitting COVID-19 than their professional or collegiate counterparts.

Maas wrote that he was not persuaded by arguments from the state and county that professional and collegiate teams represented a lower risk of spreading the virus due to their being far fewer pro and college teams.

"The game is the same, the risk of spread is similar, the youth are already practicing and with school closures or limitations on attendance, youth are isolated," Maas wrote.

Maas briefly referenced the new guidelines issued by the state, but wrote that "competent evidence was not provided to the court in this regard" at Friday's hearing and thus he declined "to anticipate what the (state) `may' do in the coming week."

Another hearing is slated for early next month on a preliminary injunction in the case, which was filed on behalf of Nicholas Gardinera, a senior at Scripps Ranch High School, and Cameron Woolsey, a senior at Mission Hills High School.

Some parents who are not ready to send their kids back to campus until COVID data shows it's safe worries this could setback reopening schools.

"I think so many of these same parents want schools to open and it's inevitable that there's going to be coronavirus spread in youth sports," said Andrea.

She didn't want to disclose her full name. She says she's recieved threats.

Parents of other athletes tweeted their concerns about what sports the California Interscholastic Federation (CIF) would allow before the year was over.

But will they continue to abide by CIF sports calendar? Or will football, basketball, and soccer take precedence? I ask because some athletes play in multiple sports. Will they have to choose or will schools make the decision for them (and favor football)?

Under the state guidelines, resuming football, rugby and water polo will also require weekly COVID testing of players -- aged 13 and above -- and coaches, with test results made available within 24 hours of a competition. Gov. Gavin Newsom said the state would absorb the cost of the required testing.

"Like rugby, like water polo. Yes, like football, that we have some testing requirements. The state of California will provide for it. We will absorb the cost. We will provide those tests," said Newsom.

Gardinera says although the judge's ruling allows them to play they still need to play nice with the state.

"We're likely still going to have to meet that criteria in order to have the government fund the weekly testing," said Gardinera.

The guidance applies to all forms of organized youth sports, including school and community programs, and private clubs and leagues.

Newsom said the combination of school closures and the inability for youth to participate in sports has had both a physical and mental health impact, "in profound and significant and in many cases deleterious ways." He said the downward trends in COVID cases in California prompted the state to move forward with a resumption of youth sports.

"We have seen considerable progress on vaccines and lower cases, and this is a positive step forward in our recovery," he said. "I applaud Governor Newsom, and commend Ron Gladnick who has been a great partner in working with my office, the governor and our public health experts to see progress in the effort to let our kids play."

Gladnick is the head football coach of Torrey Pines High School and has been a vocal advocate for letting youth sports resume. He sent a tweet thanking Fletcher, Supervisor Jim Desmond and former Republican candidate for governor John Cox for working across ideological lines on the issue.

"It's awesome when people can put small differences aside to serve a higher purpose like kids," he wrote.

The guidance encourages, but does not mandate, vaccinations for athletes, coaches and staff.

“The State issued updated youth sports guidance earlier today allowing a return to play for outdoor sports in all tiers, with additional requirements, based on scientific evidence about the lower risk of outdoor activities. Today’s order temporarily overrides that guidance by allowing indoor sports that are riskier. We will continue to lead with science and health as we review this order and assess our legal options with a focus on protecting Californians," Ali Bay, spokesperson, with CA Dept. Of Public Health.