The protests were inspired by Swedish teenager Greta Thunberg, who spoke to world leaders this week at a United Nations summit in New York. 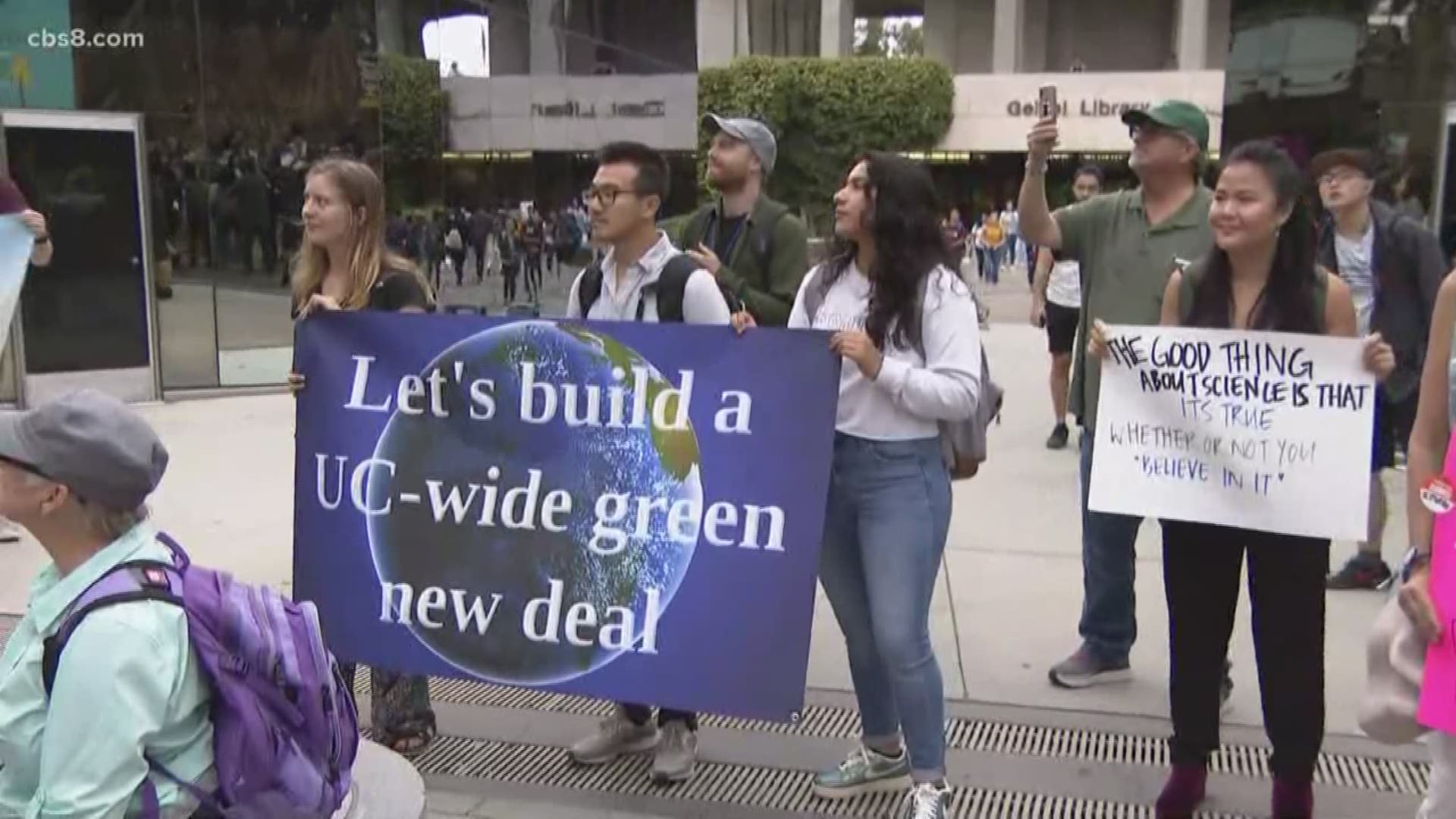 UC San Diego along with the University of California system has joined forces with more than 7,000 colleges and universities around the globe to declare a climate emergency and commit to urgent action to address the crisis. UC President Janet Napolitano and all 10 UC chancellors have signed a climate emergency declaration letter that recognizes “the need for a drastic societal shift to combat the growing threat of climate change.”

Below is a statement from UC San Diego:

In signing the declaration, UC leaders agreed to a three-point plan that includes increasing action-oriented climate research; expanding education and outreach on environmental and sustainability issues; and achieving climate neutrality.

UC San Diego say they encourage students to become climate ambassadors on campus and start conversations with classmates and friends about the climate crisis and ways in which they can together make change.

The 10-campus UC system has also just taken steps to de-carbonize its endowment funds. They say UC’s $13.4 billion endowment will be “fossil free” by the end of Sept., as will its $70 billion pension.

The protests were inspired by Swedish teenager Greta Thunberg, who spoke to world leaders this week at a United Nations summit in New York.

Friday's rallies kicked off in New Zealand, where young people marched on Parliament in Wellington, holding one of the largest protests ever held there. Organizers in the capital were forced to change their security plans to accommodate the crowds, while thousands more marched in Auckland and other parts of the country.

On the other side of the planet, more than 100,000 rallied in Italy's capital, Rome, where protesters held up signs with slogans such as "Change the system, not the climate" or just the word "Future."

Marches took place in about 180 locations across Italy, including the country's financial hub of Milan where one banner read "How dare you!" — the accusation Thunberg, 16, leveled at world leaders during her U.N. speech in New York on Monday. The Italian Education Ministry said students attending the event would not be penalized for missing school.

Fears about the impact of global warming on the younger generation were expressed by schoolchildren in Dharmsala, India. South Asia depends heavily on water from the Himalayan glaciers that are under threat from climate change.

In Berlin, activists from the Fridays for Future group braved persistent rain to protest against a package the German government recently agreed for cutting the country's greenhouse gas emissions. Experts say the proposal falls far short of what's needed if the world's sixth biggest emitter is to meet the goal of the Paris climate accord.

Actor Javier Bardem joined dozens of young people in San Sebastian in one of several early demonstrations and rallies held across Spain on Friday morning ahead of evening demonstrations to be held in the major towns and cities. They are expected to draw big crowds, especially in Madrid and Barcelona.

Bardem was in San Sebastian to promote a documentary he worked on with Greenpeace.

Thunberg said she planned to attend a protest in Montreal.

"New Zealand leading the way into Friday nr 2 in #WeekForFuture," she tweeted. "Good luck everyone striking around the world. Change is coming!!"

"We need to stop pandering to some of the people who are making money off climate change. The big oil companies, the dairy industry etc.," she said. "And make a change for the future of these kids that are here."

While thousands of high school students elected to take time off school to protest, many adults also joined the marches. One of them was 83-year-old grandmother-of-three Violet McIntosh.

"It's not my future we're thinking about," McIntosh said. She said it was time politicians should listen to young people like Thunberg, whom she described as "amazing."

"She stood out there by herself to start it all. Millions of people are following her now," McIntosh said. "She should be very proud of herself."

In the Netherlands, where thousands joined a protest in The Hague, some participants acknowledged that getting politicians to take action against global warming was only part of the story.

German government spokesman Steffen Seibert said part of the government's plan is to encourage citizens to shift their behavior.

"People, and businesses too, know that over the coming years, step by step, behavior that harms the climate (and) causes a lot of emissions will have a higher price than before," Seibert told reporters in Berlin.