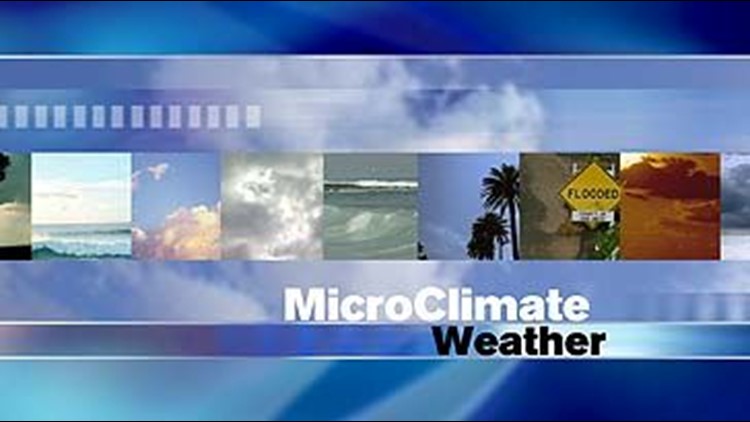 What's a "MicroClimate"... Because the weather varies throughout San Diego... from the mountains to the beaches, News 8 provides a "quick look" of weather in your area!

When we talk about the Coast...

Inversion... Normally, the temperature gets cooler as you move higher through the atmosphere; an inversion is a situation where the conditions are such that the temperature actually gets warmer.

Marine Layer... This is a layer if clouds that develops most frequently late evening but can be present all day.

Onshore Flow... refers to a pressure gradient bringing wind from off the ocean and onto the coast.

Reverse Clearing... In the summer, the beach is cloudy long after it's sunny inland; during the fall and winter, it's frequently the opposite. When it's sunny along the coast but cloudy inland, this is known as "reverse clearing."

Condensation... moisture that is squeezed out of the atmosphere. It can be in the form of a cloud or rain, or even the moisture that develops on your windshield overnight.

Dewpoint... the temperature in the atmosphere at which water condenses. The higher the dewpoint, the more muggy and uncomfortable it is outside.

Heat Index... the apparent temperature to your body, taking into account the actual air temperature and relative humidity... sort of the opposite of wind chill.

Anvil... when the top of a cumulonimbus cloud is sheared off by the jet stream, it looks like an anvil.

Orographic Lifting... when an air mass flows into a mountain and is forced upward by the terrain of the earth, this is referred to as "orographic" lifting.

Rain Shadow... an area of the lee side of a mountain that is usually dry.

Santa Ana Winds... warm dry winds that come from the northeast. they travel over many mountain ranges to reach San Diego, and passing over mountains dries out the atmosphere.

Convective Thunderstorms... these are storms that develop from the heating of the earth's surface.

Downdrafts... as thunderstorms collapse, cold air aloft rushes to the earth's surface creating massive downdrafts. These winds can be in excess of 60 mph.

Dust Devil... similar to a "dry waterspout," this weaker version of a tornado can do some damage with winds up to 40 mph.

"Heat" Lightning... no such official term, this refers to thunderstorms that provide a lot of lightning but very little, if any, rain.

Virga... rain that evaporates before it reaches the ground.If you have any questions about microclimates, or any other weather related questions just "Ask Matt".