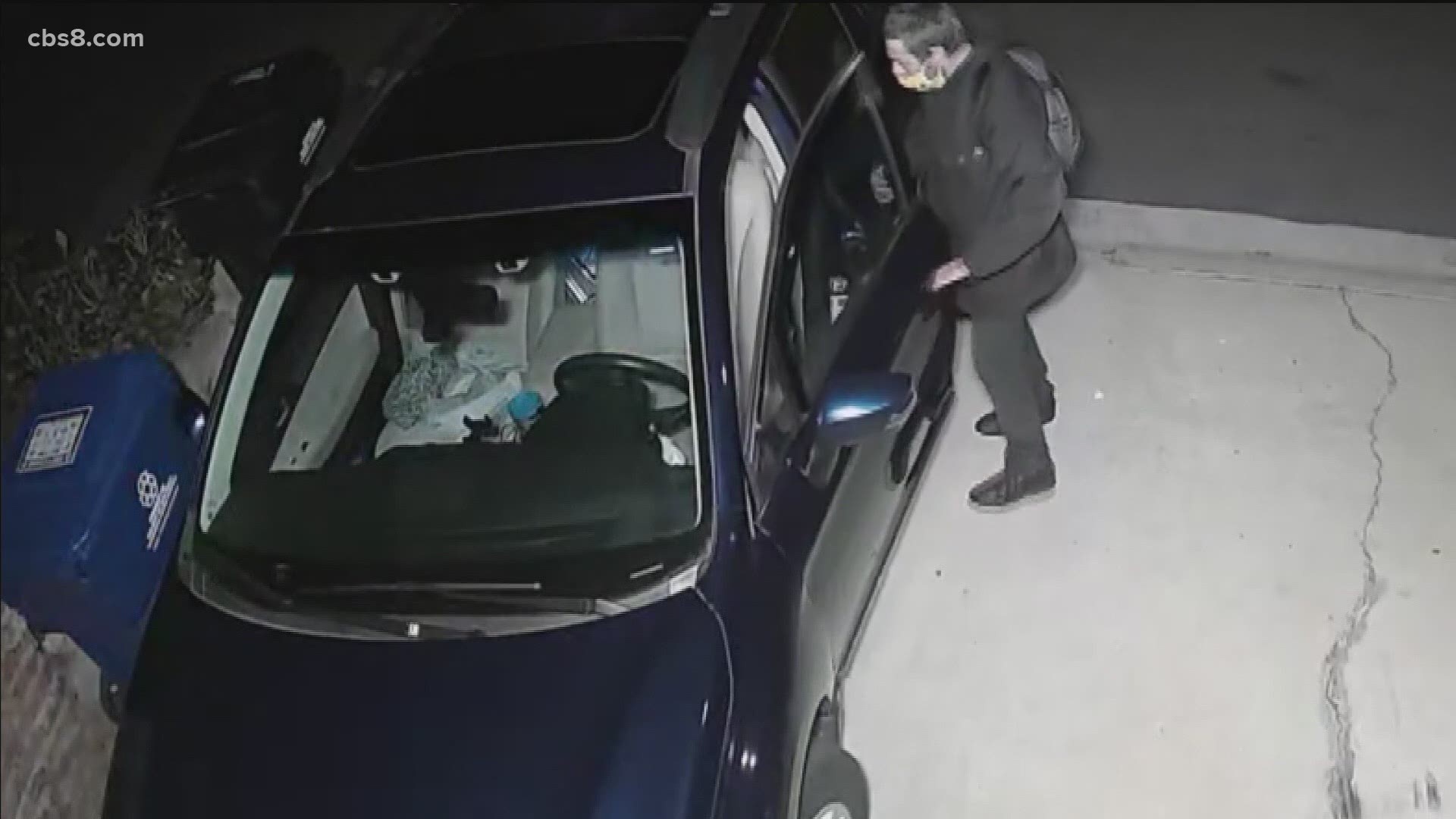 An Ocean Beach woman posted surveillance video of a man believed to have used a keyless remote device to break into her car Wednesday morning.

Rosemary Brown said when she walked out to her car, she’d seen it had been ransacked.

“The contents were rummaged through and tossed into the passenger seat,” said Brown.

She said she knows for certain that she locked her doors using the key fob to her Subaru parked in her OB driveway off Valeta Street by the YMCA, so she looked at her surveillance video.

“Unbeknownst to me, someone was able to access my car remotely by using some sort of technology,” said Brown.

When you watch the video, the timestamp at 4:44 am, it shows a person walk past her car with a flashlight and within a minute, her car lights flicker on, indicating the doors are unlocked. A suspect with a flashlight opens the door and rummages through Brown’s car. She said only her sunglasses were stolen, but it’s still unnerving.

“It's pretty creepy to feel like you've been violated in that manner,” said Brown.

Here is how it is happening. The National Insurance Crime Bureau said thieves are using an amplifier in a so-called “relay attack.”

There are countless surveillance videos of these types of thieves online.
If a key fob is inside the home, the amplifier can grab the signal and send it to another device and open the doors.

After Rosemary warned her neighbors on Facebook, she found several other victims in OB and Pacific Beach who believe that’s how their car was broken into or stolen.

Brown said the dealership told her they could change the frequency, but it wouldn’t jam the thief’s signal. Auto makers have been working on technology to stand up to relay attacks.

San Diego police said “relay attacks” are tough to track so Rosemary hopes her story will put drivers on alert.

“Hopefully with awareness and being able to protect yourself with these other items,” said Brown.

To keep a thief from hijacking your signal when you actually lock your door with a remote, manually lock your doors. Police also recommend that you don’t keep your keys by the front of the house. Instead move them further into the house and wrap the fob in aluminum foil, store in a metal box or faraday container that is lined to protect electronics from signal interference.

So called "relay attacks" where thieves can booster a key fob signal and open your door and steal your stuff or car! This is suspected in Ocean Beach. You can wrap your keys in foil, use a metal box or a faraday bag. https://t.co/mPBuEBxEjE