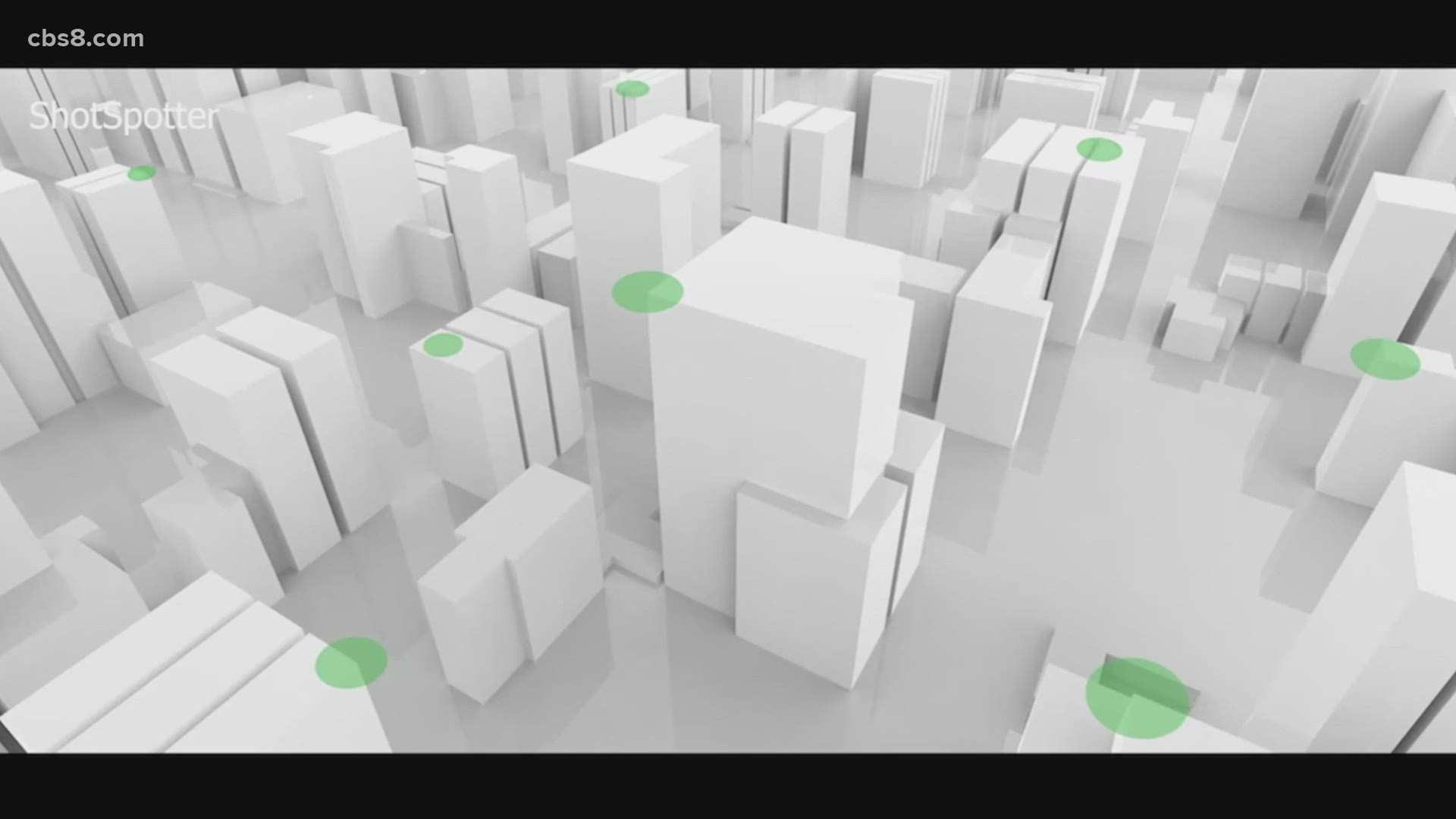 SAN DIEGO — The San Diego City Council delayed making a decision Tuesday on a police tool that some consider controversial.

ShotSpotter, an audio detection tool that sensors gunfire, is in more than 100 cities nationwide, and has been in Southeast San Diego since 2016.

The audio sensors are placed on light poles to detect nearby gunshots.

“The ShotSpotter contract is bad for San Diegans, it's ineffective and it's costly,” said Homayra Yusufi, Deputy Director for Partnership for the Advancement of New Americans (PANA) and Trust SD Coalition.

ShotSpotter is in a 3.6-square-mile radius in Southeast San Diego neighborhoods police say have the highest number of gun-related crimes.

They are located in Lincoln Park, Skyline, Valencia Park, and O’Farrell which are predominantly Black and Brown communities.

“This is indicative of systems that have failed our communities over and over again and have over-policed and has created mass incarceration,” said Tasha Williamson, community activist.

During Tuesday’s city council meeting the $1.1 million ShotSpotter program was up for renewal up to four years but was sent back to staff for further review.

“The ShotSpotter item was returned to staff in order to evaluate further amendments to the contract, including potentially expanding the use of this public safety tool to other Council Districts and, at the request of the Councilmember, removing this technology from Council District Four,” said Jen Lebron, Director of Communications, Office of Mayor Todd Gloria.

She adds that gun violence is increasing across the city.

San Diego police say gang-related shootings are up 129% and many of those cases are connected to illegal and untraceable weapons called ghost guns.

Trust SD Coalition, a surveillance watchdog organization applauds the delay but says ShotSpotter should be delayed.

“We don't believe the city should be considering contracts such as ShotSpotters until there is a community oversight board,” said Yusufi.

In a San Diego Police PowerPoint for council members, it says officers responded to 417 ShotSpotter activations in a two-year period and 62 were connected to gun-related crimes.

The mayor’s office says the ShotSpotter is not being disabled.

“We have every intent of bringing this item back to the City Council, as we believe it’s a valuable tool that can help address gun violence and catch perpetrators of gun violence. Our objective remains preventing senseless gun violence throughout our city and improving public safety in all neighborhoods," said Lebron.

“In the ShotSpotter system, an alert is deemed a “false positive” alert when ShotSpotter alerts law enforcement to what it determines is a gunshot, police are deployed to the location of the alert, and they confirm the sound was something else – seeing evidence of fireworks for example. An alert is deemed a “false negative” if gunfire is not detected but then is later found to have occurred in the coverage area.

We know from our customers that the ShotSpotter system exceeds our guarantee of at least 90% detection accuracy because customers report false positives or negatives directly to the company. This enables us to honor our service level guarantee as well as continually improve the system. Over the last two years, ShotSpotter has maintained a 97% accuracy rate including a 0.5% false positive rate aggregated across all customers.

Additionally, each sound detected as potential gunfire by our sensors is reviewed in our Incident Review Centers (IRCs). ShotSpotter rigorously trains and tests every individual reviewing real-time gunfire incidents at the company to ensure they are performing at a level consistent with the company’s quality objectives.”

Response to Assertion that ShotSpotter Creates High-Tension Situations Where Police Assume Someone is Armed:

“Actually, the opposite is true. When a police officer is provided more information about a gunshot incident, they arrive at the scene more situationally aware than they typically would. Information equates to preparation and better responses. ShotSpotter equips police officers with more information than they might typically have when arriving at the scene of a gunshot incident. For example, ShotSpotter can inform police officers if there are multiple shots fired and even multiple shooters.”

“ShotSpotter has developed its technology and policies to enhance public safety while respecting individual privacy. A Brookings Institution study found that more than 80% of gunfire incidents are not called into 911 so police are not able to respond to gunshots. ShotSpotter fills that gap.

The ShotSpotter system is a tool that gives officers an opportunity to make a greater impact on gun violence. By itself, it is not a cure-all, but when used as part of a comprehensive gun crime response strategy, it can contribute to positive outcomes for the police and the community.

In recent remarks regarding his administration’s gun crime prevention strategy, President Biden highlighted gunshot detection systems as a prevention strategy that community mayors should have access to in order to “better see and stop gun violence” in their communities.”

“The MacArthur Justice Center Report draws erroneous conclusions from researchers’ interpretation of police report categorizations, falsely equating them with no shots fired. ShotSpotter has been in operation for 25 years, serves more than 110 cities and has earned trust and high renewal rates from many police departments because the system is effective in helping save lives, reducing gun violence, and making communities safer. 911 call center data alone provides an incomplete and misleading picture of ShotSpotter’s accuracy and effectiveness."