SDPD released what they called "critical incident video" of the shooting Sunday afternoon. 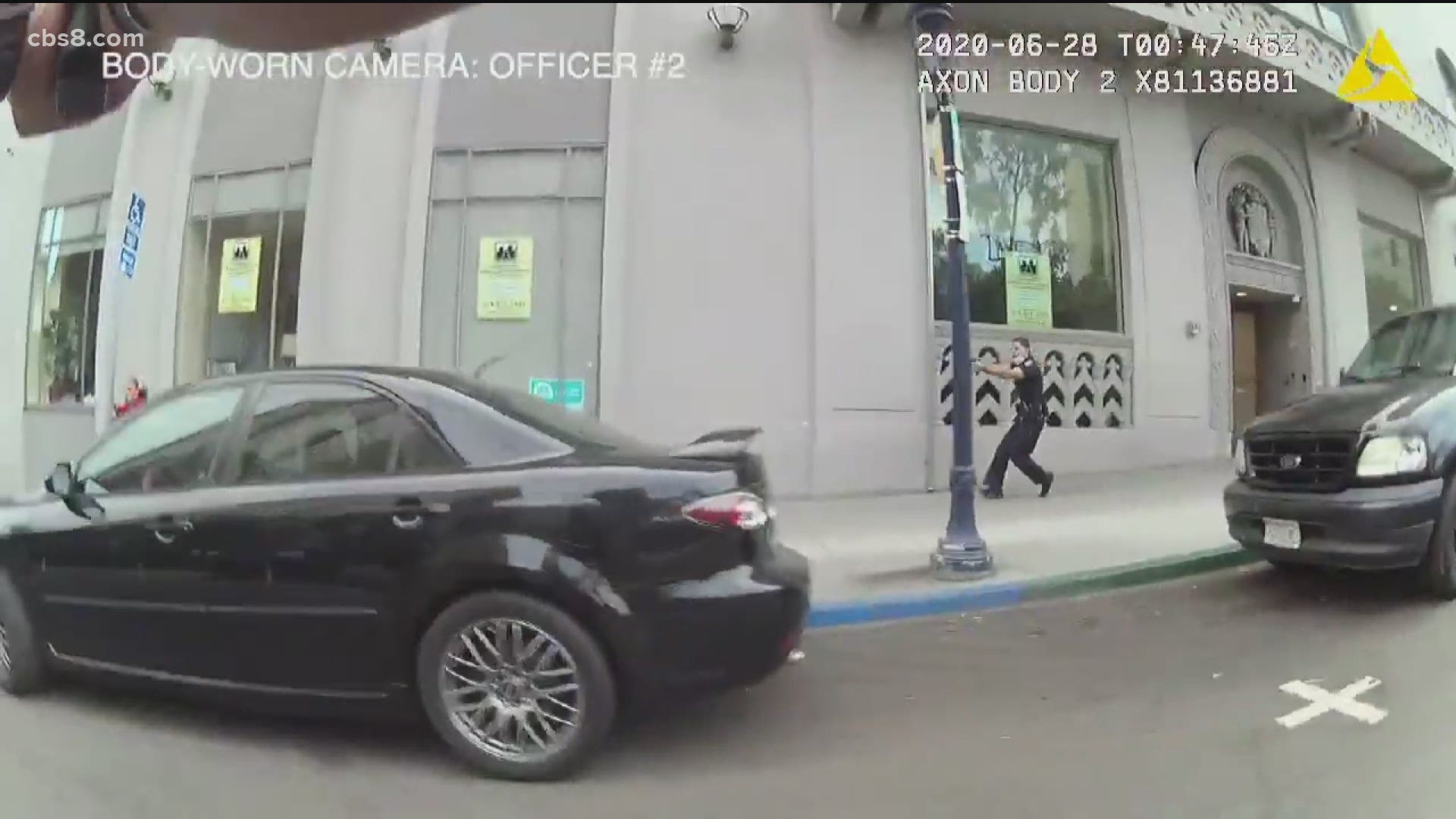 SAN DIEGO — Content warning: Video in this story depicts an officer-involved shooting and may not be suitable for all viewers.

San Diego police shot and injured a man in downtown Saturday night after they said he aimed a firearm at officers. Officers believed they recognized the man - later identified as Leonardo Hurtado Ibarra - from a wanted poster for a recent robbery committed on Sunday, June 21 because of distinctive tattoos on his face, authorities said.

Two San Diego police officers, who were in the 1200 block of Sixth Avenue at 5:45 p.m. Saturday noticed a man leaving a building on the west side of the street and thought he resembled a man sought in connection with a recent robbery, according to Lt. Matt Dobbs of the San Diego Police Department.

"When the officers attempted to contact the male he refused to cooperate with their directions and walked away," Dobbs said, adding one chased him down the street, the other on the sidewalk. "As he was walking, he dropped the items he was carrying in his hands and began reaching towards his waistband."

SDPD released what they called "critical incident video" of the shooting Sunday afternoon. It included street camera and body-worn camera footage of the incident.

A release from the San Diego Police Department said the man pointed an object at the officer in the street and the two officers discharged their service weapons. The object appeared to be a loaded revolved wrapped in a bandana which officers located under the suspect's body as he was handcuffed, according to SDPD.

Police on Sunday identified the suspect who was shot as Leonardo Hurtado Ibarra of San Diego.

Ibarra was taken to a local hospital where he underwent surgery, police said. As of Sunday afternoon, he remained in the ICU with life-threatening injuries.

According to the release, the 25-year-old Hispanic man was struck at least once and then fell to the ground. Ibarra was then handcuffed by police and provided first aid.

Police said surveillance footage backs up their claim Ibarra refused to cooperate, but the shooting remains under investigation.

The item appears to be a revolver wrapped in a bandana, authorities said.

It remains unclear whether Ibarra shot at police or not, but no officers were injured during the incident.

The incident will now be investigated by several agencies, and will be monitored by the Federal Bureau of Investigations and the U.S. Attorney's Office.

The names of the officers involved have not been released. They are both assigned to SDPD Central Division.

Protesters gathered at the scene late Saturday demanding police transparency. About 120 people gathered around police tape, many of them yelling at officers and demanding answers, according to the San Diego Union- Tribune. They chanted "Hands up, don't shoot."

Another protest against the shooting began Sunday morning and grew to about 100 demonstrators by the afternoon.

The NAACP San Diego Branch issued the following statement on the incident prior to the police identifying the suspect:

The entire incident was captured on video.  We expect SB 1421 and AB 748, both of which mandate prompt release of video evidence and officer records, to be promptly obeyed by the SDPD.  What these bills both say, and what we strongly believe, is that transparency and accountability are the cornerstone of rebuilding trust between law enforcement and the public it is supposed to serve.

So far, the San Diego Police Department has released only still pictures from a video that could have been released in its entirety, along with their explanation of what occurred.  This video could show and the public could hear that the de-escalation policy was upheld, and this was not another case of excessive use of force.

Now is not the time to temporize and withhold and spin in an effort to sell a pre-determined narrative.  Now is time to show bold leadership and come clean with the public. We will be watching very closely"