Vyvianna Quinonez, 28, was arrested Sunday morning and allegedly knocked out two of the flight attendant's teeth during the incident. 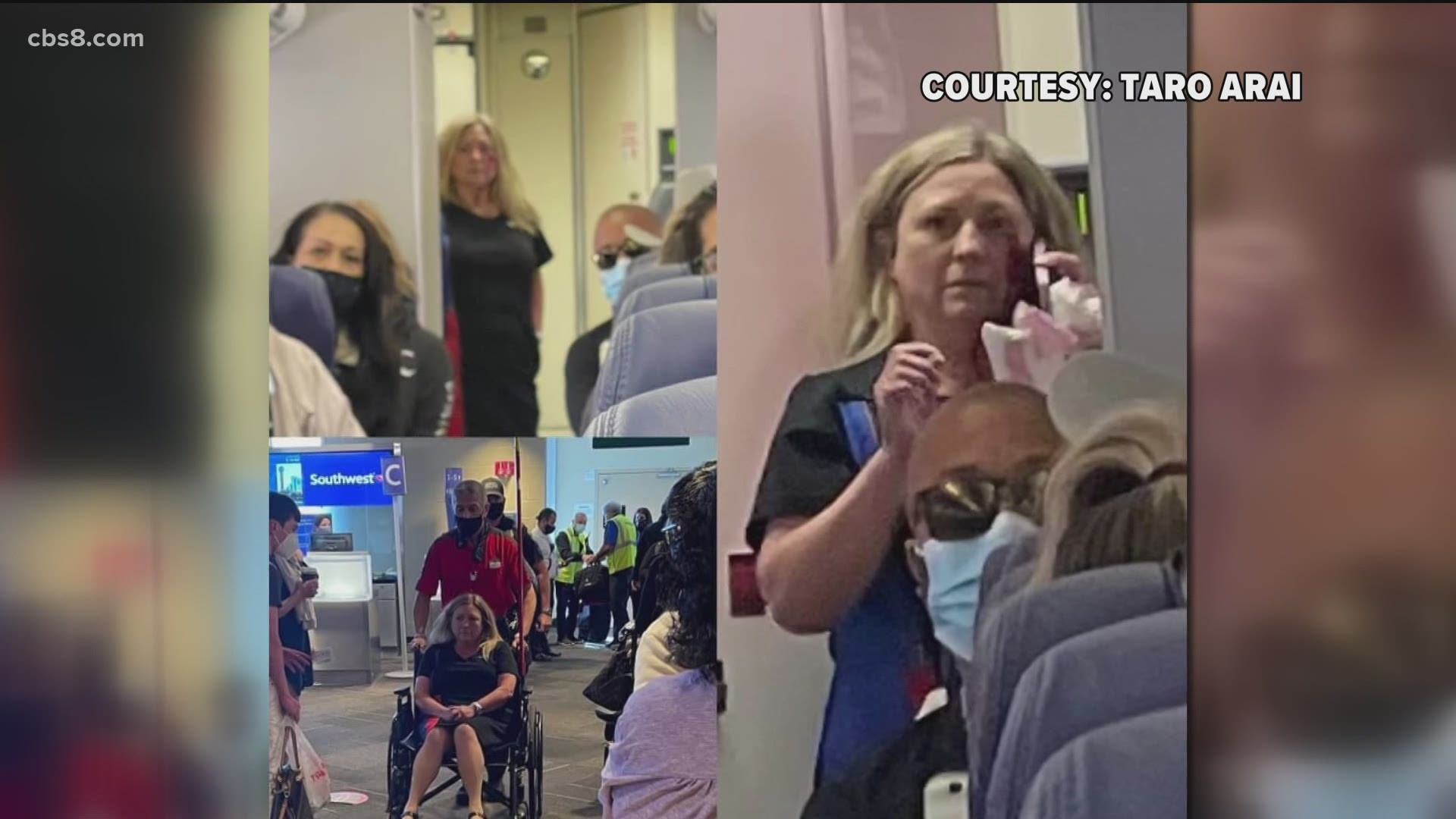 SAN DIEGO — Authorities on Tuesday publicly identified a woman who allegedly attacked a flight attendant last weekend on a plane bound for San Diego, knocking out two of her teeth.

Vyvianna Quinonez, 28, was arrested Sunday morning at the culmination of a flight from Sacramento to San Diego International Airport.

San Diego Harbor Police received reports just before 9 a.m. regarding a disturbance during which a passenger struck a flight attendant in the face aboard Southwest Airlines Flight 700, according to the San Diego Harbor Police. The victim was taken to Scripps Memorial Hospital, SDHP Sgt. Timothy De La Pena said.

Quinonez was arrested on suspicion of felony battery causing serious bodily injury and was booked into Las Colinas women's jail in Santee, police said. County records did not show Quinonez in custody as of Tuesday afternoon.

While specific details on what sparked the alleged attack were not released, Southwest Airlines spokesman Chris Mainz said in a statement, "The passenger repeatedly ignored standard in-flight instructions and became verbally and physically abusive upon landing. Law enforcement officials were requested to meet the flight upon arrival, and the passenger was taken into custody. We do not condone or tolerate verbal or physical abuse of our flight crews, who are responsible for the safety of our passengers."

A passenger on the plane captured images of a flight attendant bloodied.

"As soon as I turned around the lady stood up and 'pound' and knocked her out on the floor," said Taro Arai, witness.

Another passenger said the incident started when a flight attendant asked the woman to buckle her seatbelt after landing in San Diego and the plane was still taxiing. She said the flight attendant was punched and her teeth were knocked out.

"People should be ashamed for that type of behavior," said Susan Marie Stidham.

The passenger arrested told News 8 it was self-defense and she wouldn't comment further without her attorney present.

"She is recovering, I'm giving her privacy to recover and get over the shock of this to occur," said Montgomery.

The union wrote that 477 passenger misconduct incidents occurred between April 8 and May 15 alone.

"Today's traveling environment requires a new level of firmness in both tone and direction to ensure proper control in the cabin of our aircraft as the attitudes and behaviors of the flying public have, unfortunately, declined," Montgomery wrote.

In an interview with News 8 Montgomery said, "It's absolutely deplorable and we will not stand for it."

The letter seeks assistance from Kelly in directing management to support flight attendants and make it clear to passengers that they could face civil penalties and/or criminal charges for not complying with regulations or federal mask mandates.

According to the Federal Aviation Administration, it has received around 2,500 reports of "unruly behavior" from passengers since Jan. 1, with around 1,900 reports of passengers refusing to comply with the mask regulation.

"If the numbers are at the levels that we continue to see and continue to rise," said Montgomery.

Quinonez was booked into jail facing felony battery causing bodily injury. She posted $35,000 bond and is scheduled to be in court on September 30. She is from Antelope, California.

So a typical short uneventful flight from Sacramento to San Diego, early Sunday morning, on Southwest Airlines, turns violent. As we are pulling up to the gate, a woman in the back row took off her seat belt and stood up. The flight attendant told her to keep her seat belt fastened while we were still moving. What I saw was the flight attendant in the front suddenly start screaming “No, No, No! Stop!”, and running toward the back. I thought maybe someone was trying to open the back doors at first, but the woman in the back was attacking the flight attendant, punching her in the head. While the flight attendant was staggering back with a bloody face, we were all told to stay in our seats while they brought in police to remove the unruly passenger. Good grief people. Lady, welcome to the “no fly list”.