For the first time since Rebecca Zahau was found dead at the Spreckels mansion in Coronado, we are seeing a reenactment of the entire hanging scenario. 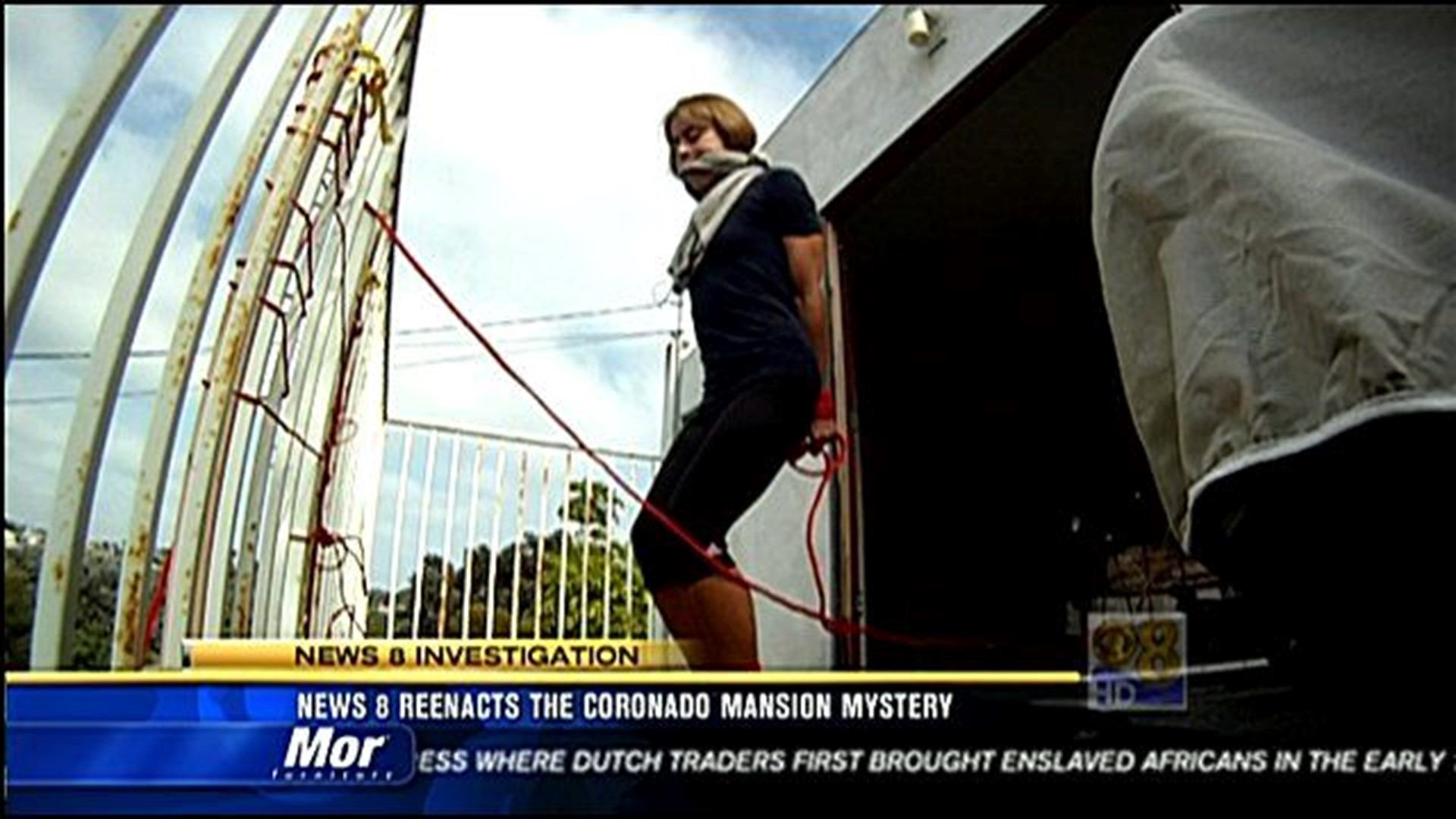 CORONADO, Calif.  (CBS 8) -- For the first time since Rebecca Zahau was found dead at the Spreckels mansion in Coronado July 13, we are seeing a reenactment of the entire hanging scenario.

The circumstances of Zahau's death remain shrouded in mystery, in part, because detectives never recreated the alleged hanging as part of their investigation.

The San Diego Medical Examiner and Sheriff's Department have ruled Zahau's death a suicide by hanging; but Zahau's family believes she was murdered.

"It would have taken a contortionist – frankly, a Cirque De Soleil performing artist – to accomplish such a 'suicide' feat,'" according to the Zahau family attorney, Anne Bremner.

With the help of a criminal justice student from Miramar Community College, News 8 put the Sheriff's suicide theory to the test.

Patricia Lanham, 26, agreed to reenact the Zahau hanging scenario. She is about the same height and 15 pounds heavier than Zahau.

We started with that cryptic message painted on the bedroom door, "She saved him can you save her."

Investigators believe Zahau was naked when she painted that message because they found black paint on her breasts.  In fact, Zahau would have been naked during this entire suicide scenario.

"She did have to put some planning into it," Miramar student Lanham said during the reenactment.

News 8 used the same type of rope described in Zahau's autopsy report. The sequence of the binding and hanging was described by investigators during a news conference Sept. 2.

Zahau would have cut the rope into three pieces using a knife and tied one section of rope to the foot of a bed inside a second-story bedroom at the mansion.

Zahau may have draped the rope over the balcony to eyeball its length. She would need about 30 feet of rope for the section used in the alleged hanging.

Another section of rope, she used to tie her ankles; wrapping it several times in a figure-eight pattern, according to investigators.

Next, the noose: a simple slip knot using 11 inches of rope; it goes around her neck over the top of her hair.

Then, the autopsy said Zahau used a long-sleeve shirt to gag herself. The sleeves would have been looped around her neck, tied in a knot and the shirt itself placed inside her mouth.

"It seems like it could be impossible and it seems really odd and bizarre, like why would she do that?" asked Lanham, the Miramar student. "Why would she go through these steps? And, it seems highly unusual."

Investigators believe Zahau bound her wrists with the third section of rope using the same figure-eight pattern; first, in front of her body, and then she would have slipped one hand out and reinserted it into the ropes behind her back.

It's a complex suicide scenario that our criminal justice student was able to accomplish in less than a half hour.

"With all the steps taken to actually get it done, there's actually a whole lot of time to change your mind and think, 'No I really don't want to do this,'" said Lanham.

While bound and gagged, Zahau probably would have hopped across the bedroom to face the balcony railing. The balcony itself was about two feet wide.

Detectives found footprints and toe prints on the balcony floor.

Using a bed frame railing approximately the same height as the balcony railing – about 38 inches – Lanham was able to reenact the leaning action by kicking her feet up and over.

"Did she have any bruises on her hips or anything?" asked Lanham during the railing reenactment.

In fact, the autopsy report shows Zahau did have three small abrasions across her abdomen.

To complete the hanging, Detectives said Zahau leaned forward and fell over the balcony head first. It was a nine foot drop before the roped snapped tight, according to the autopsy report.

"I think that all we showed is that it was possible for her to do this herself," Lanham said. "It doesn't prove that she did it herself."

The sheriff's department declined to participate in the reenactment.

In part two of this investigation, News 8 tied a 100-pound weight to a bed and dropped the weight off a balcony. Viewers can see the dramatic results of that test Wednesday on News 8 at 5 p.m.