The family of an unarmed black man killed by El Cajon police is taking legal action. On Thursday, lawyers for the wife and child of Alfred Olango announced legal steps against the department. 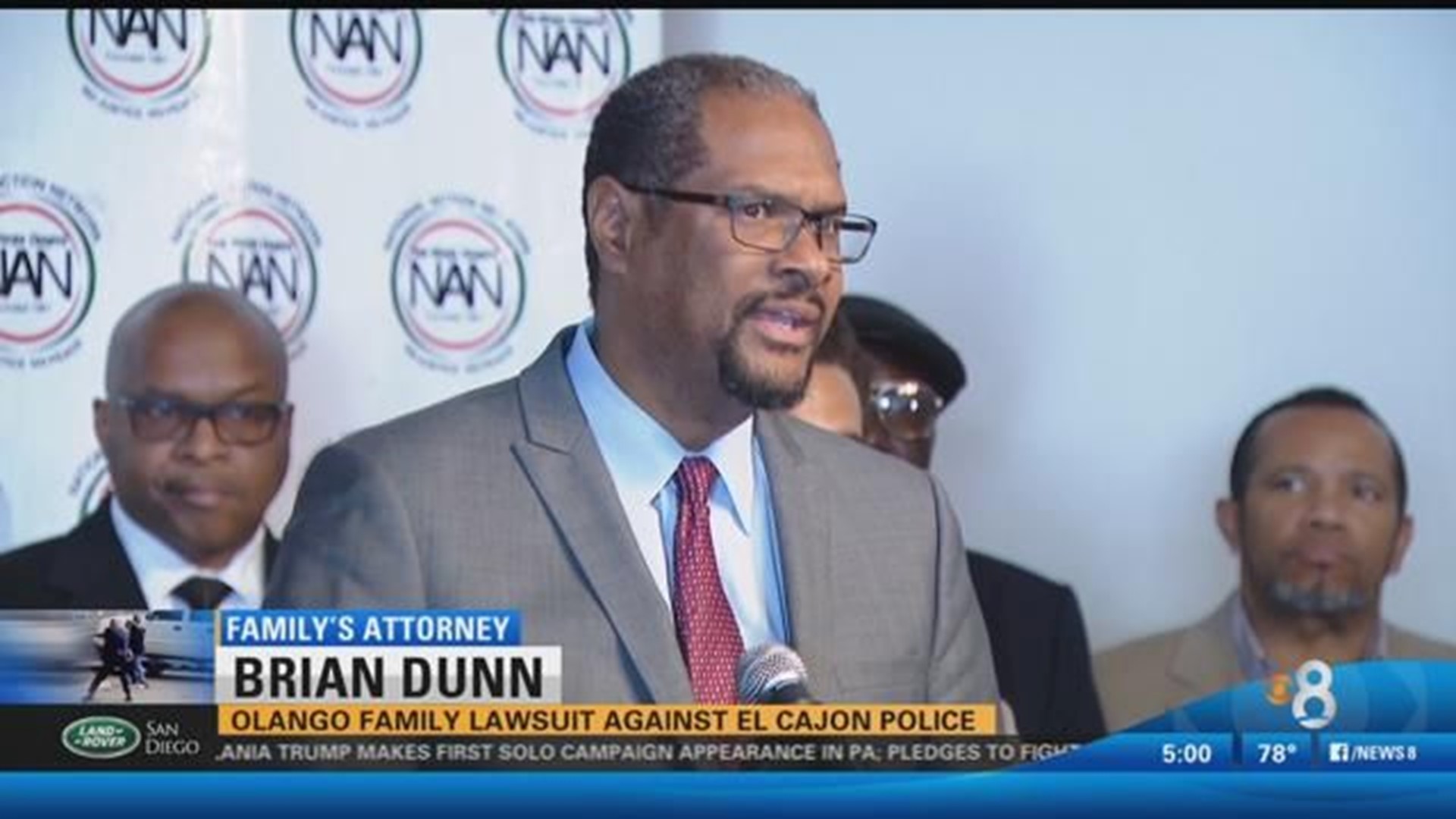 SAN DIEGO (CNS) - A wrongful death claim was filed against El Cajon, its police department and individual officers Thursday for the fatal shooting of Ugandan immigrant Alfred Olango on Sept. 27 in a strip mall parking lot near Parkway Plaza.

The claim was filed on behalf of Olango's widow, Taina Rozier and his two daughters. The city has 45 days to respond to the claim before the family can file a lawsuit.

"We are here for one reason only. We don't want another family to go through this," Brian Dunn, attorney for the plaintiffs said at an afternoon news conference.

Olango's widow, father, daughter and sister attended the news conference, in which they also called for an independent investigation of the shooting, the criminal prosecution and dismissal of officer Richard Gonsalves, who fired the fatal shots.

"When Gonsalves pulled the trigger on my son, he declared war on humanity," Richard Olango, Alfred's father said. "We are going to ... have a global campaign against police brutality that starts here in San Diego."

It was the second claim to be filed in connection with the shooting. One was recently filed on behalf of Olango's sister.

"We know that the long fight for justice is just beginning," Shane Harris, president of the National Action Network said.

"And you can best believe that I'm going to keep running my mouth until I see these issues of policing, police must know that if they hold misconduct, they will pay the price."

Harris also called for an independent investigation of the shooting and the El Cajon Police Department by U.S. Attorney General Loretta Lynch, because of what he called a conflict of interest for the District Attorney's office.

"We say to Bonnie Dumanis, we don't trust you and we don't want you investigating this case," Harris said. "We are setting an agenda. We are going to put Alfred Olango out front on a national level."

The shooting was followed by five consecutive nights of unrest and protests.

El Cajon police released two videos of the shooting three days after the shooting. Each was recorded at a taco shop parking lot in the 800 block of Broadway -- one by a surveillance camera next to a drive-through window, the other by a witness who recorded it on her cell phone.

The snippets show officers Gonsalvez and Josh McDaniel approaching Olango, seen pacing back and forth through a parking area and then next to a parked pickup truck. Following a brief face-off, gunshots sound, and Olango collapses to the pavement.

El Cajon Police Chief Jeff Davis confirmed that Gonsalves fired his service weapon at Olango as McDaniel simultaneously shot him with a Taser. Both officers have 21 years of law enforcement experience and were placed on administrative leave per department protocol.

The events that led to the fatal confrontation began when patrol personnel were dispatched to investigate three emergency calls from Olango's sister reporting that he was behaving erratically and walking into traffic in a commercial district a few blocks north of El Cajon Valley High School.

Police said Olango was uncooperative, repeatedly refused to remove his hand from his pocket, assumed "what appeared to be a shooting stance" and pointed at Gonsalves an object that turned out to be an electronic smoking device that resembled the barrel of a gun.