There’s new video showing the care of bottlenose dolphins in the Navy Marine Mammal Program. Animal rights activists say the video shows the dolphins in medical distress and close to death in pens ... 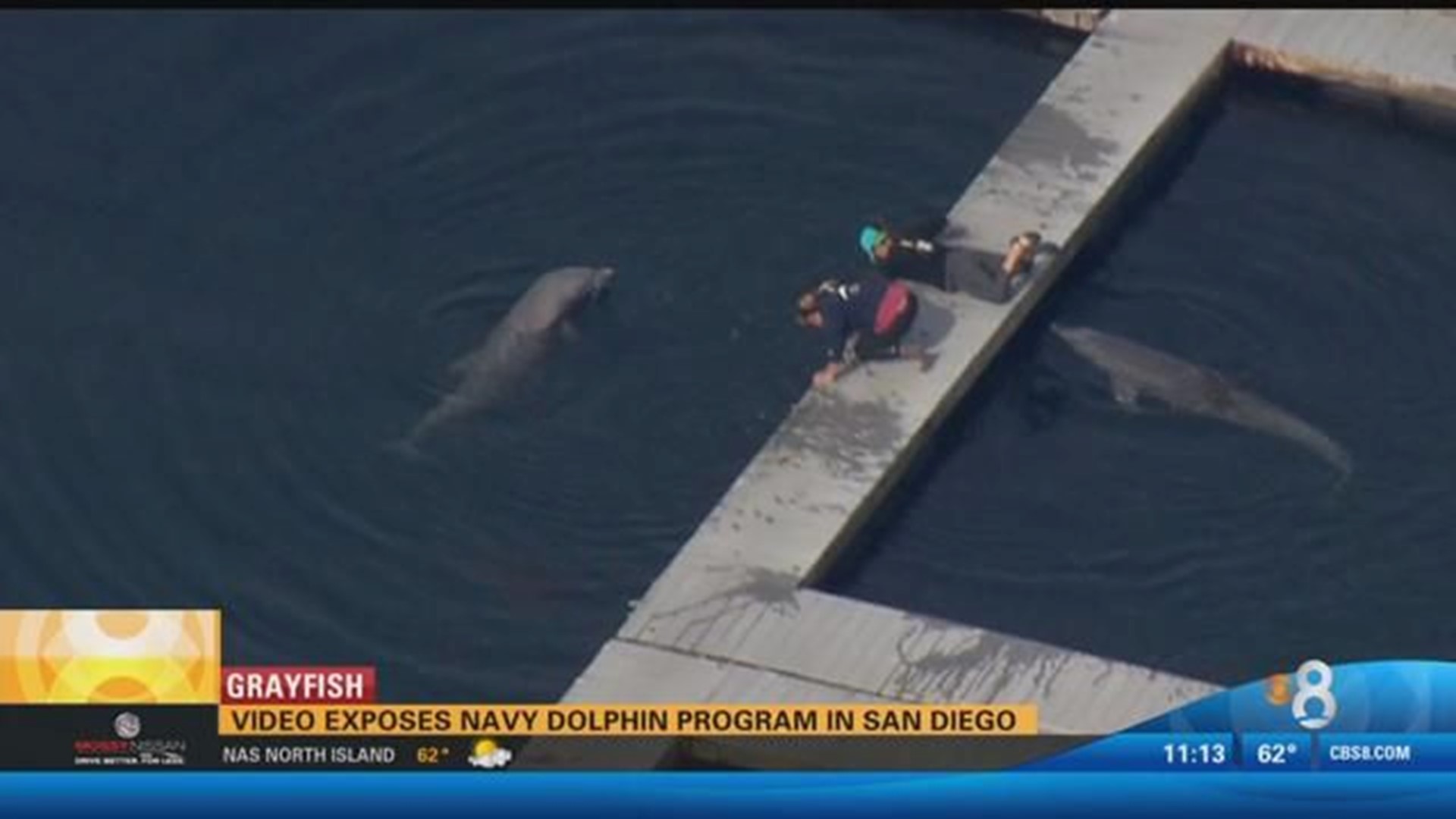 The documentary Blackfish publicly exposed Sea World’s treatment of orcas and led to a shut down of the park’s orca breeding program.

Animal rights activists say the video shows the dolphins in medical distress and close to death in pens at the Space and Naval Warfare Systems Command (SPAWAR) facility on Point Loma.

The video shows Navy contractors holding an IV solution bag over one dolphin while vets tend to the animal.  Another clips shows a staff member using a bag and tube to force-feed a dolphin food and/or fluids.

One dolphin is seen sitting in a pen for days harnessed into a flotation device to keep it from sinking underwater and drowning.

“I've got videotape of animals literally for hours floating around in those pens supported by flotation, not moving.  That’s not living.  That's dying,” said Rector.

“My camera person, when she's out there people walk by and ask her, ‘What are you doing?'  'Oh, there's dolphins down there?’  Most people don't even know they're there,” said Rector.

In fact, the grayfish have been there for decades; 85 bottle nose dolphins in all -- some born in captivity at the Point Loma SPAWAR facility, some born at Sea World under a breeding contract with the Navy.

Dozens more were captured from the wild and transported to San Diego Bay far away from their native waters in the Atlantic or the Gulf of Mexico.

“These animals are suffering,” said Rector.  “When dolphins sit in pens and shiver and don't move and they're beating targets in front of it to get it to swim, they're just punishing the animal,” according to Rector.

The navy marine mammal program costs taxpayers more than $29 million per year, according to federal contracts issued by the Navy.

Civilian contractors with Science Applications International Corp. (SAIC) and the National Marine Mammal Foundation not only train the dolphins to detect underwater mines but also conduct medical research on the animals.

After viewing the grayfish video, CBS News 8 repeatedly asked the Navy if its dolphins were sick and/or dying.  Officials declined our request to conduct an on-camera interview with one of the Navy’s contracted marine mammal veterinarians.

Instead, SPAWAR Director of Public Affairs James Fallin issued a written statement confirming that one dolphin had been euthanized.

“Today (Tuesday, April 11), one of our eldest dolphins, a 46-year-old male named Makai, and one of our most celebrated veterans of the Iraq War, was peacefully and humanely put to rest. He was a beloved and accomplished member of the Navy Marine Mammal Program team, and an American hero who lived to be more than twice the average age of dolphins in the wild. Recently, Makai had been receiving critical care for ailments associated with old age,” the statement said.

Fallin did not respond to follow-up questions asking about the nature of the Makai’s ailments, or questions inquiring about additional dolphin deaths at the SPAWAR facility.

David Phillips is the director of the International Marine Mammal Project in Berkeley.  His nonprofit is calling on the Navy to retire its dolphins.

“I find it really shocking and disturbing that (the Navy) would try to characterize these dolphins as American heroes.  The dolphins are not participating voluntarily and they're not necessary in any security setting now,” Phillips said.

Fallin said the Navy Marine Mammal Program provides state-of-the art veterinarian care and its dolphin program is accredited by a non-profit that inspects animal laboratories, the Association for Assessment and Accreditation of Laboratory Animal Care (AAALAC).

None of the AAALAC inspection records are public, however.  The group did not respond to an email seeking comment and inspection reports.

SPAWAR did release to CBS News 8 a summary sheet of Navy marine mammal training exercises, which took place over the past 18 months.  The summary described exercises where Navy dolphins "cleared inert training mines" from shallow waters near San Clemente Island, Seal Beach, and San Diego harbor.  The summary said the exercises were "critical to warfare readiness."

The Navy is required to report all marine mammal deaths within 30 days to the National Oceanic and Atmospheric Administration (NOAA), which keeps a Marine Mammal Inventory Report (MMIR) of all captive marine mammals in the nation, including those at SPAWAR.  NOAA is preparing to post the entire MMIR online and admitted there were errors in the reports provided to CBS News 8 under a FOIA request.

Phillips, the International Marine Mammal Project director, said the Navy is hiding behind a veil of secrecy.

“They don’t want to end the program because they like continuing it for the jobs and the people who are working with the dolphins.  That shouldn’t be allowed to dictate what happens to these dolphins,” Phillips said.

“These are animals are far ranging and deep diving and they're being kept in such small pens.  It's not healthy.  They're languishing there.  They're dying,” said Phillips.  “My view is that there is not a single dolphin in the Navy complex that wouldn’t do far better in a seaside sanctuary retirement area.”

In the wake of CBS News 8’s investigation, SPAWAR abruptly took down its entire Navy Marine Mammal Program web site detailing more than one thousand medical and technical studies conducted on its animals.  A cached version can be found here.

The navy has long-term plans to retire its trained marine mammals and replace them with underwater robots.

Fallin, the SPAWAR spokesperson, said “while the long term goal remains to replace dolphins with machines, we are not there yet.”

The Navy also has 55 sea lions in its marine mammal program, trained to find and intercept underwater scuba divers.

Most of the dolphins and sea lions are kept in San Diego Bay but some are located in Kings Bay, Georgia and Bangor, Washington.  The Navy won’t say exactly how many animals are kept in each of the three locations.