It expands to nearly 40 million people restrictions he said already applied to about half the state. 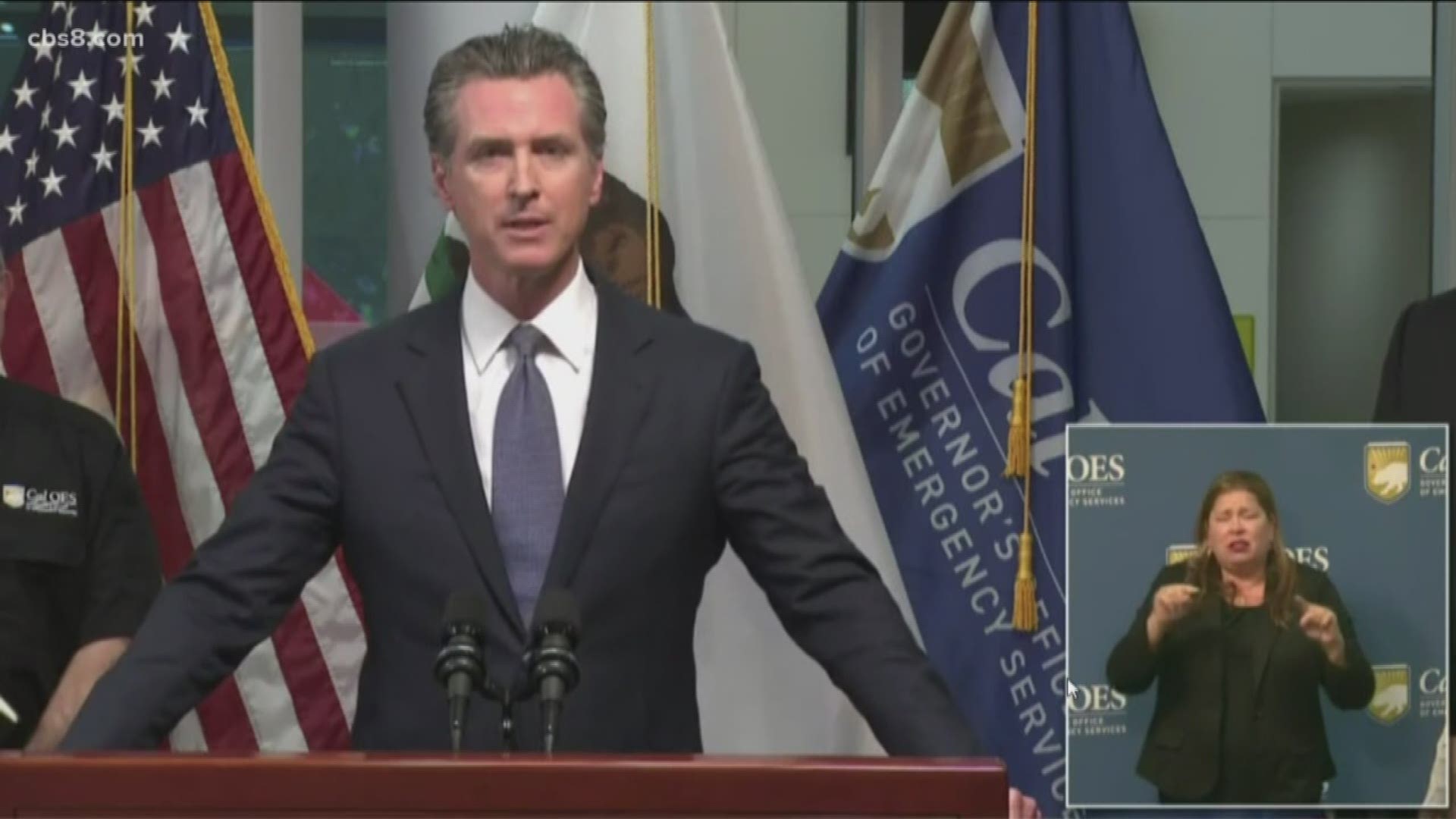 Effective at midnight Thursday until further notice, the state of California is under a shelter in place order. The Governor’s order Thursday evening marked his most aggressive stance yet in the fight against Coronavirus.

With 19 deaths and close to 1,000 infected in the state, Newsom is ordering all Californians to stay at home, unless they need to go out for absolute essential needs.

Businesses not providing essential services like grocery stores and pharmacies must send workers home. Exceptions are made for health care workers, police, fire and other emergency responders.

Authorities will not enforce the order. Rather, the governor is relying on people to do the right thing.

“There's a social contract, people, I think recognize the need to more to meet this moment,” he said.

The strict new rules come after the governor briefed President Trump, predicting that more than half of Californians, 25 million people, will be infected with the coronavirus over an eight week period.

“I’m being very straight with you, these are numbers I can assure you governors, mayors, the administration across the county are working with,” he said.

Newsom pledged to make use of California's hospitals, motels, navy ships, and even university dorms to staff more sick patients.

He hopes the emergency back-up plan can be averted if people stay in their homes and restrict social interactions to slow the spread of the virus.

“We need to bend the curve in the state of California,” he said.

Newsom asked for help from Congress too by requesting one billion dollars on top of the one billion just approved by the state legislature to support the state's medical response.

“We need to acknowledge the reality,” he said.

RELATED: Newsom: 56% of CA population will be infected with coronavirus

Newsom also called up 500 National Guard troops Thursday to help with distributing food. He announced the state had purchased its own 357-bed hospital to help treat an illness he warned at worst could sicken more than half the state's residents to varying degrees.

His move came after counties and communities covering about half the state's population already had issued similar stay-at-home orders.

Earlier Thursday, Los Angeles County announced a near-lockdown in an effort to curb the spread of coronavirus, urging all residents to stay home except for essential needs.

The “Safer at Home” order announced Thursday urges the closure of all non-essential businesses including all indoor shopping centers and prohibits the gathering of more than 10 people in enclosed spaces.

In making the announcement, Los Angeles Mayor Eric Garcetti said: “We’re about to enter into a new way of living here in Los Angeles."

Senate Majority Leader Mitch McConnell has unveiled a sweeping economic rescue plan to pump $1,200 checks directly to taxpayers, $300 billion for small businesses to keep idled workers on payroll and $208 billion in loans to airlines and other industries.

It's the initial Republican offer on the biggest package yet to respond to the coronavirus outbreak. Negotiations with Democrats begin Friday.

The GOP leader's effort builds on President Donald Trump's request for Congress to “go big” as lawmakers race to craft a $1 trillion economic aid and stimulus package amid the pandemic crisis and nationwide shutdown that's hurtling the country toward a likely recession.

The death toll in Italy has overtaken China’s, a stark illustration of how the coronavirus pandemic has pivoted toward Europe and the United States.

Italy now has 3,405 registered deaths, roughly 150 more than China _ a country with a population more than 20 times larger.

The milestone came the same day that the Chinese city where the virus first emerged recorded no new infections, a sign that China’s draconian lockdowns were a powerful method to stop the virus' spread.

A visiting Chinese Red Cross team has criticized Italians' failure to properly quarantine themselves, and and take the national lockdown seriously.