No decisions were reached to take legal action against the state in regards to the county's COVID-19 case rate but the board of supervisors will meet again Monday. 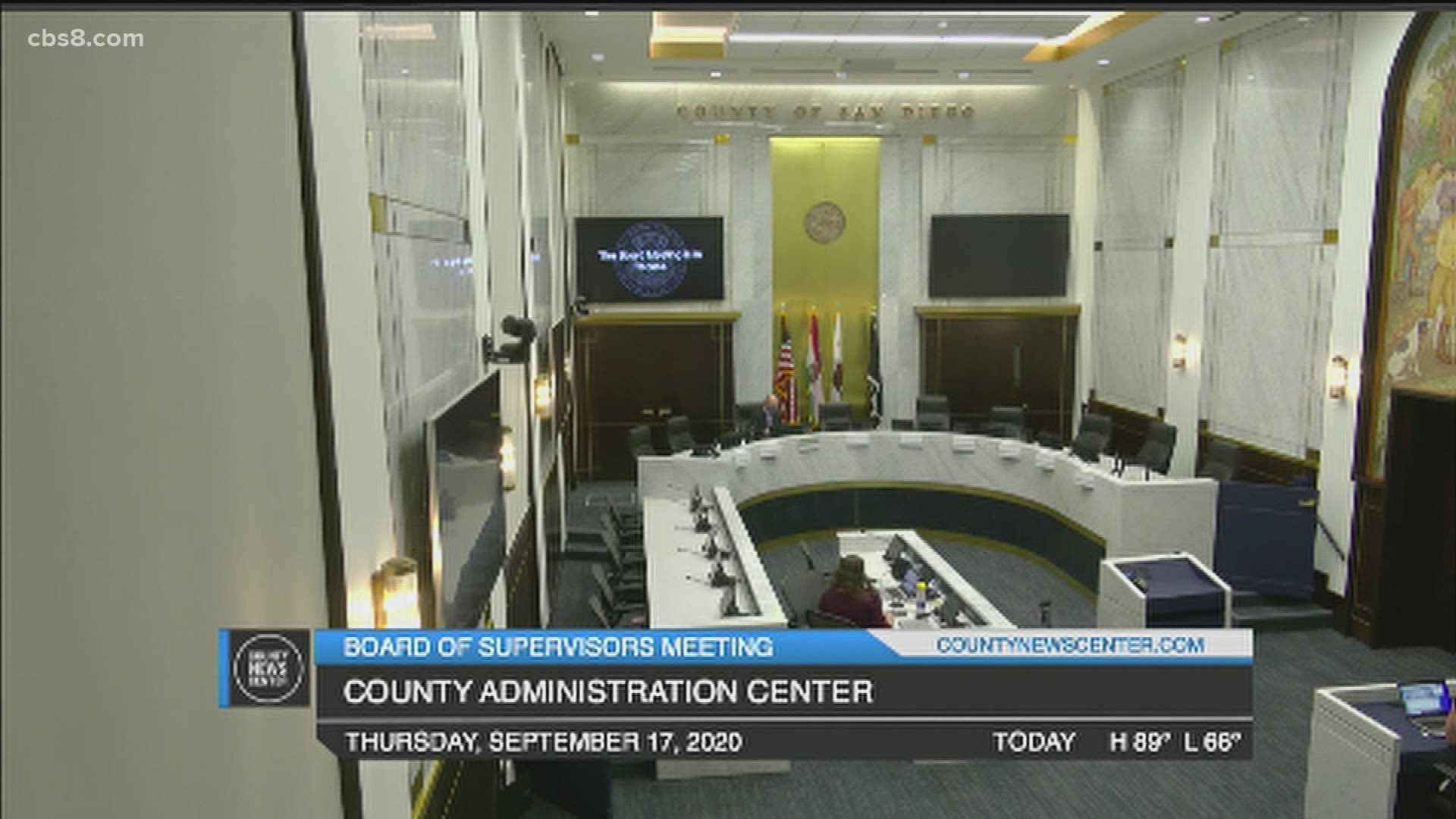 SAN DIEGO COUNTY, Calif. — About two hours after the San Diego County Board of Supervisors met for a closed session Thursday night to discuss the potential of filing a lawsuit against the state over its coronavirus case rate, the board's chairman Greg Cox released a statement saying that no decisions were reached. San Diego County could be forced into a higher tier next week, which would require some businesses to modify operations.

The board will meet again Monday to consider further actions according to Cox. His full statement reads:

“Tonight, our Board of Supervisors met in a special closed session to discuss our options regarding the potential placement of the County on a more restrictive State tier. No decisions were made to take any legal action. However, the Board will meet again Monday at 5:00 pm in a special closed session, after receiving updated information regarding the County’s State tier status, to consider any further actions.”

Our board took no action in the closed session tonight and it would be inappropriate to comment on the deliberation. pic.twitter.com/w26DndrxiC

If San Diego were to revert to the most restrictive purple tier, businesses like restaurants and gyms would - for a third time - have to shut down to indoor clients. Also under the purple tier, schools that have not yet reopened to in-person instruction would not be allowed to do so as long as the county remains under Tier 1. Those schools which have already re-opened their classrooms under the current red tier, though, would be permitted to stay open.

Cox called the meeting Wednesday evening after the county’s request to exclude San Diego State University students from the case rate was denied.

“We're going to continue to push for consideration of reasonable alternatives to prevent our businesses from having to close simply because there are a number of outbreaks that have nothing to do with business operations,” said Cox in announcing the meeting. 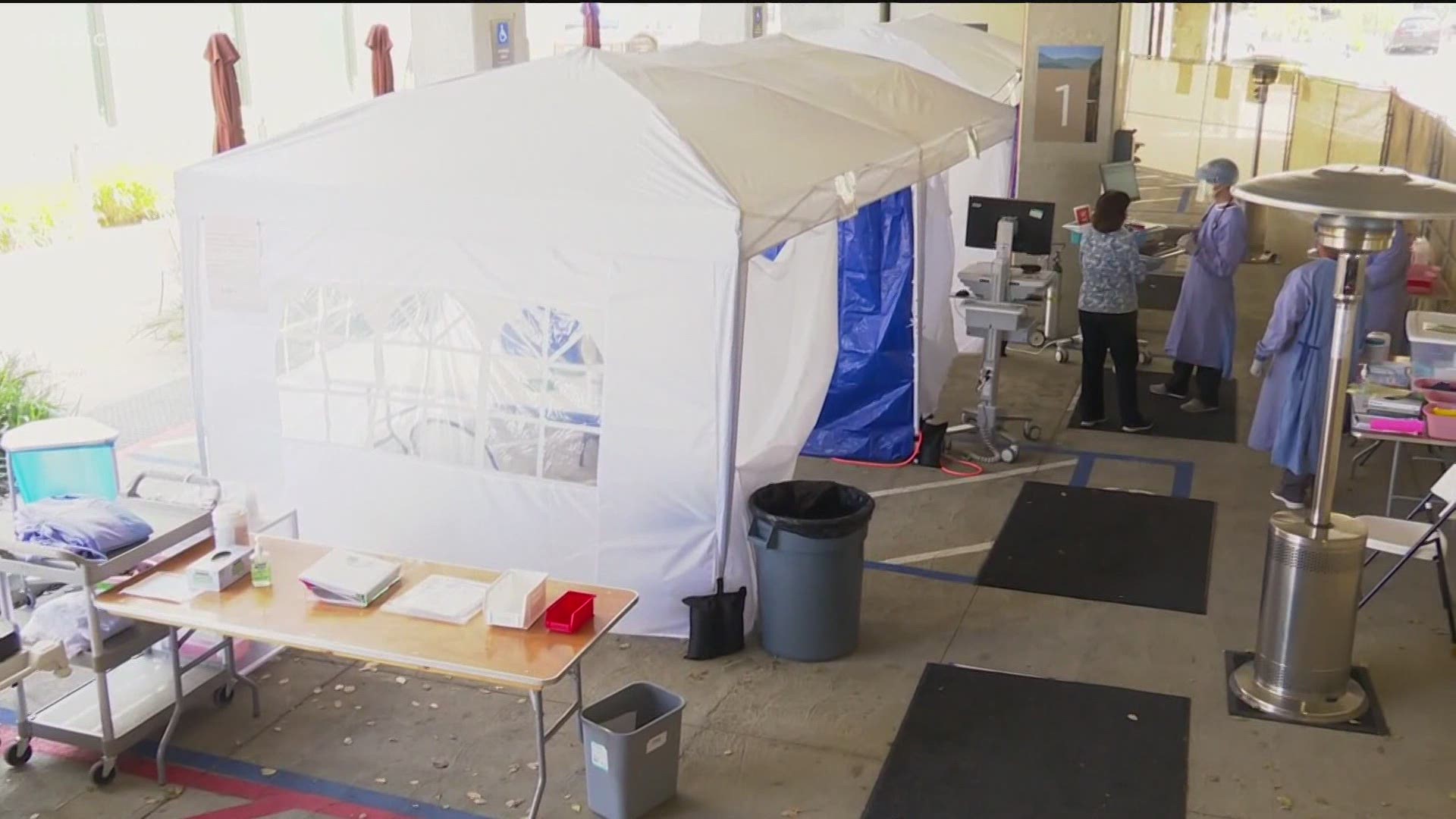 More than 700 SDSU students have tested positive for COVID-19. If the county were permitted to exclude students, then its rate would still be within Tier 2 limits. However, Gov. Gavin Newsom denied the county’s request because the students are still considered members of the community-at-large. Approximately 75% of students who tested positive live off-campus.

A lawsuit is just one option and it is not known whether there are enough votes to support a lawsuit. It was also not apparent what legal angle the county may take or whether it would seek an injunction to stop the county from backsliding into Tier 1 if its case rate remains above 7.0 next Tuesday. The rate rose to 8.1 on Tuesday.

Earlier this week, Supervisor Jim Desmond proposed the county stop enforcing business closures and focus only on health and safety requirements. The measure was not seconded by another supervisor and did not move forward to a vote.

Before entering the closed session on Thursday, Desmond pointed out the discussion occurred before the county received notice the governor would not allow an exclusion of students from the rate.

Chairman Cox has called for a closed session meeting tonight to discuss options when it comes to COVID-19. You know where I stand on this matter, and I believe your voices are heard. I'm hopeful my colleagues are fed up and will support keeping our businesses open.

Also, before entering the meeting, Supervisor Nathan Fletcher hinted he may not support a lawsuit against the state.

“We are in a battle against the coronavirus, not the State of California,” said Fletcher in a statement to News 8. “Their public health experts looked at the situation in San Diego closely and made a decision that I understand and respect.”

Our case count is not headed in the right direction, but it's important to remember that more than three-quarters of our cases have nothing to do with San Diego State. pic.twitter.com/W4twlwFpKN