The state's goal is to vaccinate 75% of people 16 and older to achieve so-called herd immunity -- equating to around 2.02 million San Diego County residents. 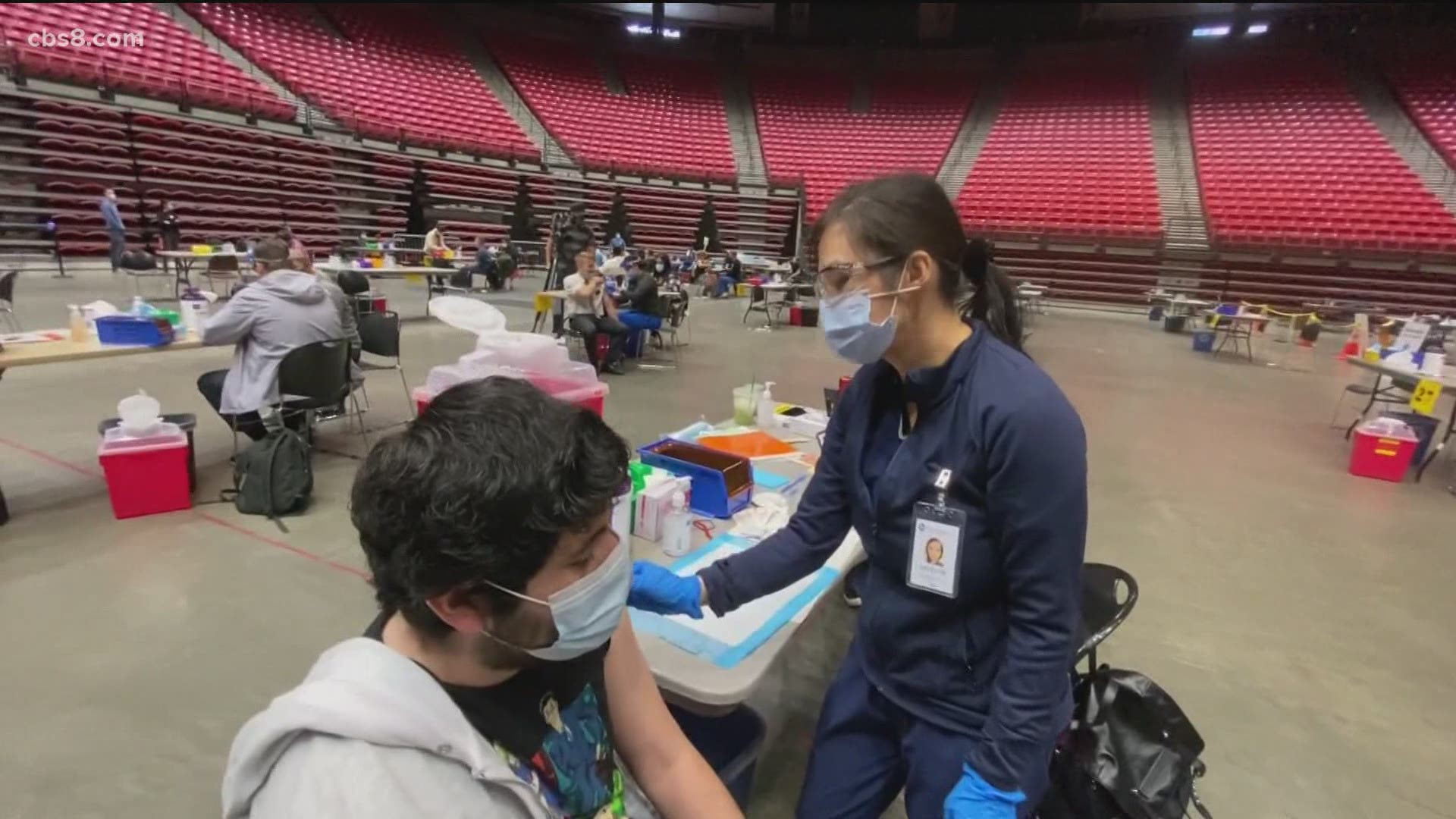 SAN DIEGO — Millions more Californians are now able to get the COVID-19 vaccine as eligibility opened up to everyone 16 and over, regardless of health condition or occupation on Thursday.

San Diego County leaders are calling the opening eligibility a "milestone" in the fight against coronavirus, as San Diego now strives to attain herd immunity by immunizing at least 75 percent of the eligible population, which is just over 2 million San Diegans.

In anticipation of this new surge of residents seeking out those coveted vaccine appointments, the state is making changes to its "My Turn" sign-up system.

The state has revamped the site to make it easier for users to search for and make an appointment.

Even so, county leaders warn that a healthy dose of patience will be needed as thousands more San Diegans will be seeking out vaccine appointments in the coming days and weeks.

"We'll be back in a place where it is very hard to get an appointment for a little bit," warned County Board of Supervisors Chairman Nathan Fletcher.

Eligibility for the vaccine opens up tomorrow to any San Diegan 16 years of age and older.

Are you ready to get your vaccine shot?

"The health and safety of San Diego County residents is our number one priority, and, in an abundance of caution, we are pausing use of the Johnson & Johnson vaccine while state and national authorities thoroughly investigate these reports," Dr. Wilma Wooten, San Diego County's public health officer, said Tuesday.

Earlier Tuesday, the U.S. Centers for Disease Control and Prevention and the Food and Drug Administration recommended states pause use of the one-dose vaccine after six women between the ages of 18 and 48 developed a "rare and severe" blood clot called cerebral venous sinus thrombosis, according to a joint statement from the agencies. The women developed the clots six to 13 days after receiving a Johnson & Johnson vaccine. One of the women died.

For San Diegans who got the vaccine more than a month ago, the risk is very low, officials said. For San Diegans who recently got the vaccine -- within the last few weeks -- they should be aware of any symptoms. People who develop severe headache, abdominal pain, leg pain or shortness of breath were urged to contact their health care provider and seek immediate medical treatment.

"San Diegans should continue to get vaccinated with a Pfizer or Moderna vaccine, which are now being used at the clinics that offered the Johnson & Johnson vaccine," Wooten said.

Tuesday's statistics increased the region's cumulative totals from throughout the pandemic to 273,708 infections and 3,623 fatalities.

Hospitalizations due to the virus increased to 174 from Monday's reported 158. Of those, intensive care patients increased to 55 from 48. There are 53 available, staffed ICU beds in the county.

Of the 12,404 test results reported Tuesday, 2% returned positive. The 14-day rolling average of positive tests is 2%. 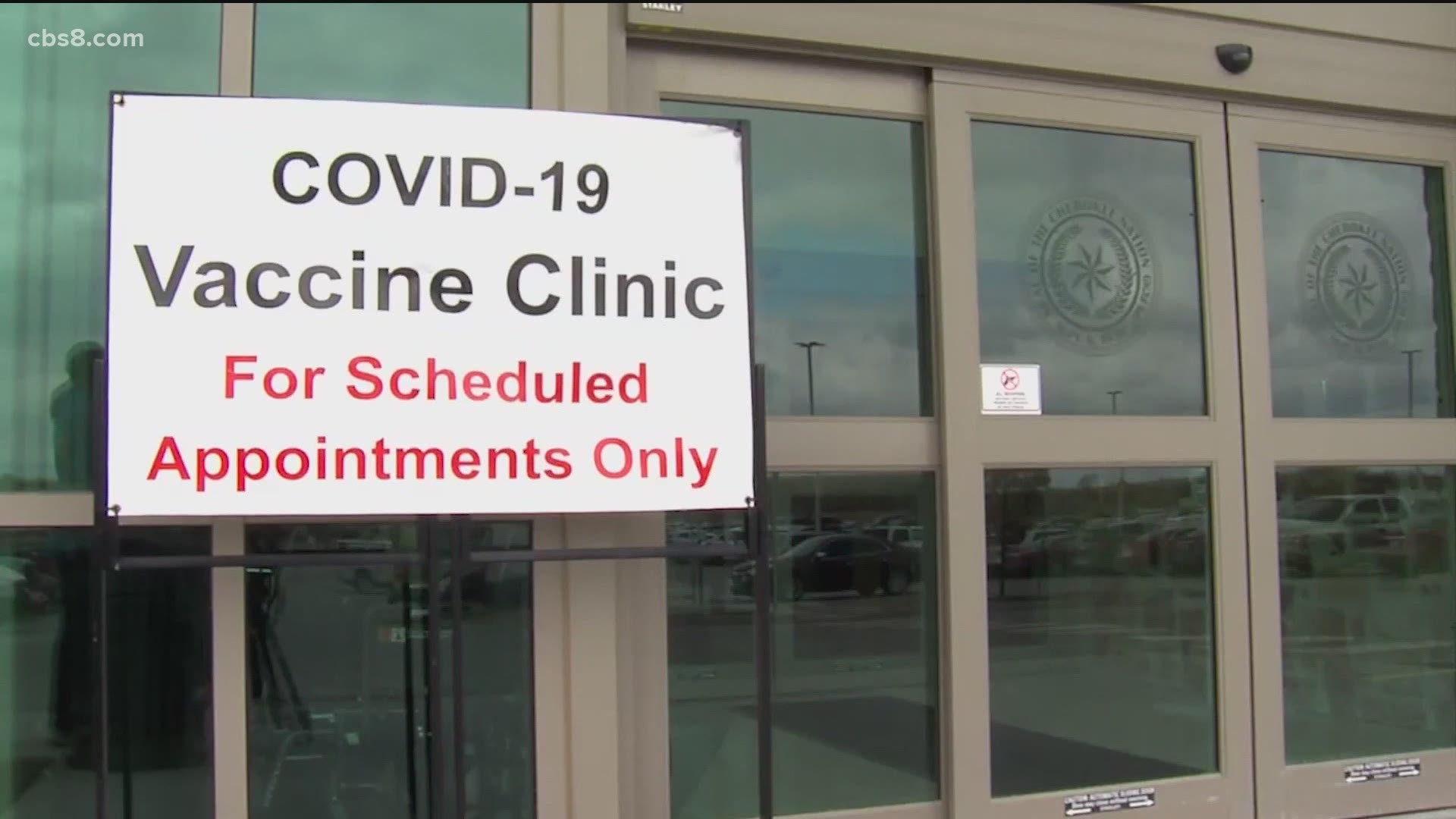 More than 2.1 million COVID-19 vaccine doses have been delivered to San Diego County, according to the county Health & Human Services Agency, and 1,181,876 county residents -- or 44% -- have received at least one dose.

The county reported a total of 719,723 people in the San Diego area -- or 28.2% -- are fully vaccinated. The numbers include both county residents and those who only work in the region.

The state's goal is to vaccinate 75% of people 16 and older to achieve so-called herd immunity -- equating to around 2.02 million San Diego County residents.

The San Diego Fire Department announced Monday appointments are available at the Balboa Municipal Gym for the Moderna vaccine on Wednesday. Appointments can be made at www.sandiego.gov/covid-19-vaccination.

Patients who have appointments scheduled on those dates will be rescheduled automatically through the MyTurn online appointment system.

Editor's note: An earlier version of this story included an incorrect figure for the percentage of those in the San Diego area who are fully vaccinated. We regret the error.