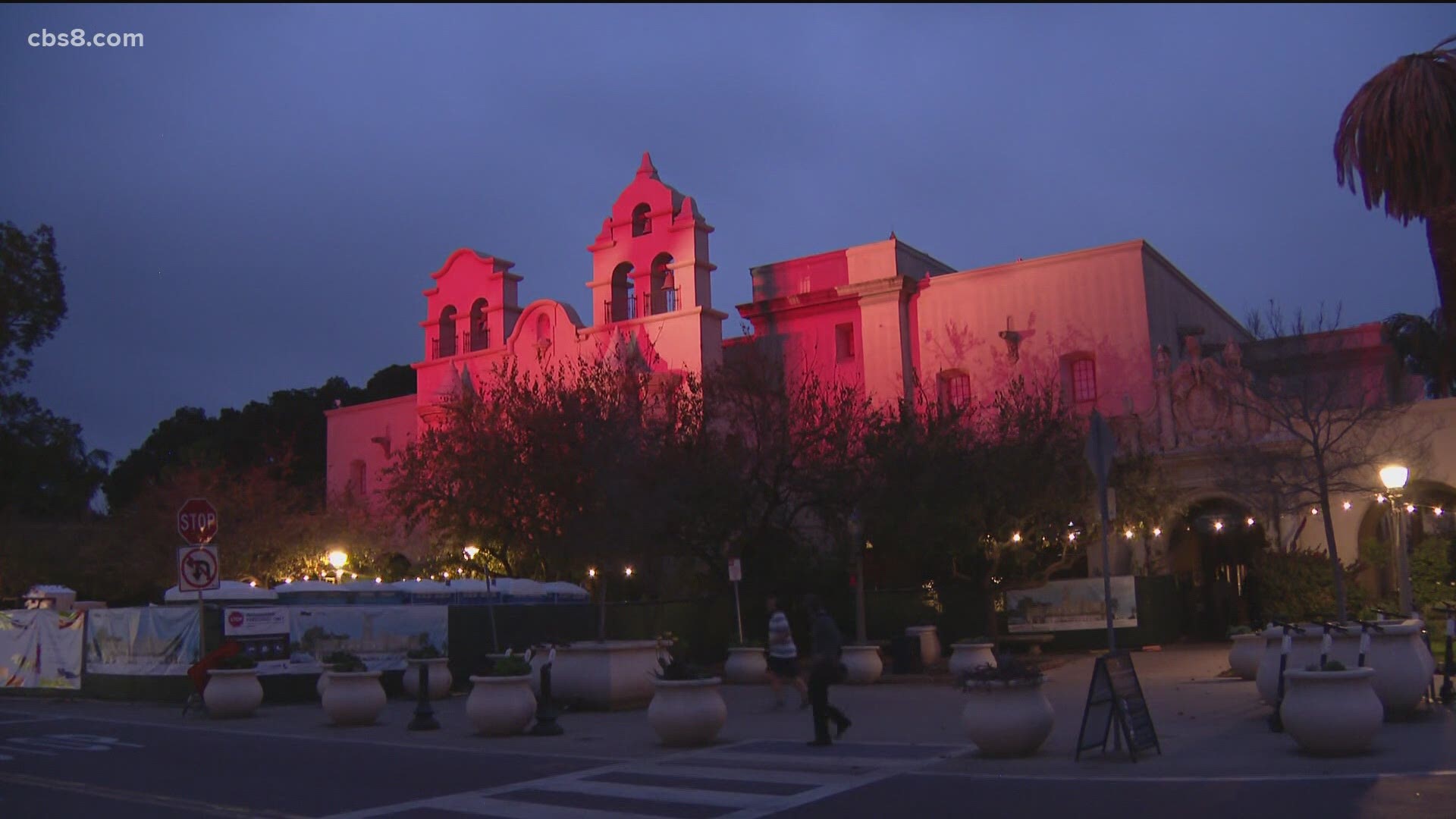 SAN DIEGO COUNTY, Calif. — The city and county of San Diego will join communities around the country Tuesday night by illuminating several historic buildings in an amber light to honor the nearly 400,000 Americans who have died of COVID-19.

President-elect Joe Biden's inauguration committee is leading a nationwide memorial to remember and honor lives lost to the virus. On Tuesday evening, there will be a special light show at the Lincoln Memorial reflecting pool in Washington, D.C. Cities and towns throughout the country have been invited to join by illuminating buildings and ringing church bells in a national moment of unity and remembrance.

At 5:30 p.m. Tuesday, Mayor Todd Gloria joined the memorial by lighting multiple buildings in Balboa Park in amber light, including the California Tower, San Diego Museum of Art Museum, and the Spreckels Organ Pavilion in amber light. Additionally, the San Diego Convention Center will be illuminated in amber.

"More than 2,000 San Diego County residents have lost their lives to the coronavirus," Gloria said. "It's important the city of San Diego stands with President-elect Biden and communities throughout the United States in this somber occasion and memorialize their deaths. This will serve as a declaration that we must continue to take steps to slow the spread of COVID-19 and not allow more preventable deaths."

Another local leader said it was an opportunity to show respect and for people to see their own lives in a new light.

“I think that being able to see the lights turn on, your home, city hall, just like the White House, it’s our house. We have the ability to recognize that we aren’t alone,” said National City Mayor Alejandra Sotelo-Solis.

Sotelo-Solis said her city has been hit hard by coronavirus and the losses will be felt for many years to come.

“We have a high rate of positive cases per capita; we have seen many of our residents lose jobs because of the three industries: tourism, retail and education,” Sotelo-Solis said.

Sotelo-Solis also said she knows COVID-19 will be contained at some point but it’s still important to recognize what was lost and then focus on rebuilding our lives one step at a time.

The Museum of Us, House of Hospitality, Mingei International Museum, Casa de Balboa and other locations in Balboa Park were illuminated in red, white and blue.

.@SanDiegoCounty tonight will take part in the Nationwide COVID-19 Memorial to Lives Lost. We will illuminate the County Administration Center in an amber color to remember every life lost to the virus. #COVIDMemorial pic.twitter.com/urDwnaBOPQ

Fletcher held a COVID-19 Altar De Muertos last year to honor those who have died from the pandemic.