With a second COVID-19 surge expected, how are San Diego hospitals planning to meet the demand?

"We're damn tired of this. In fact, we're sick of it and I don't know what to tell people. We've got people dying in our hospitals," Scripps Health CEO said. 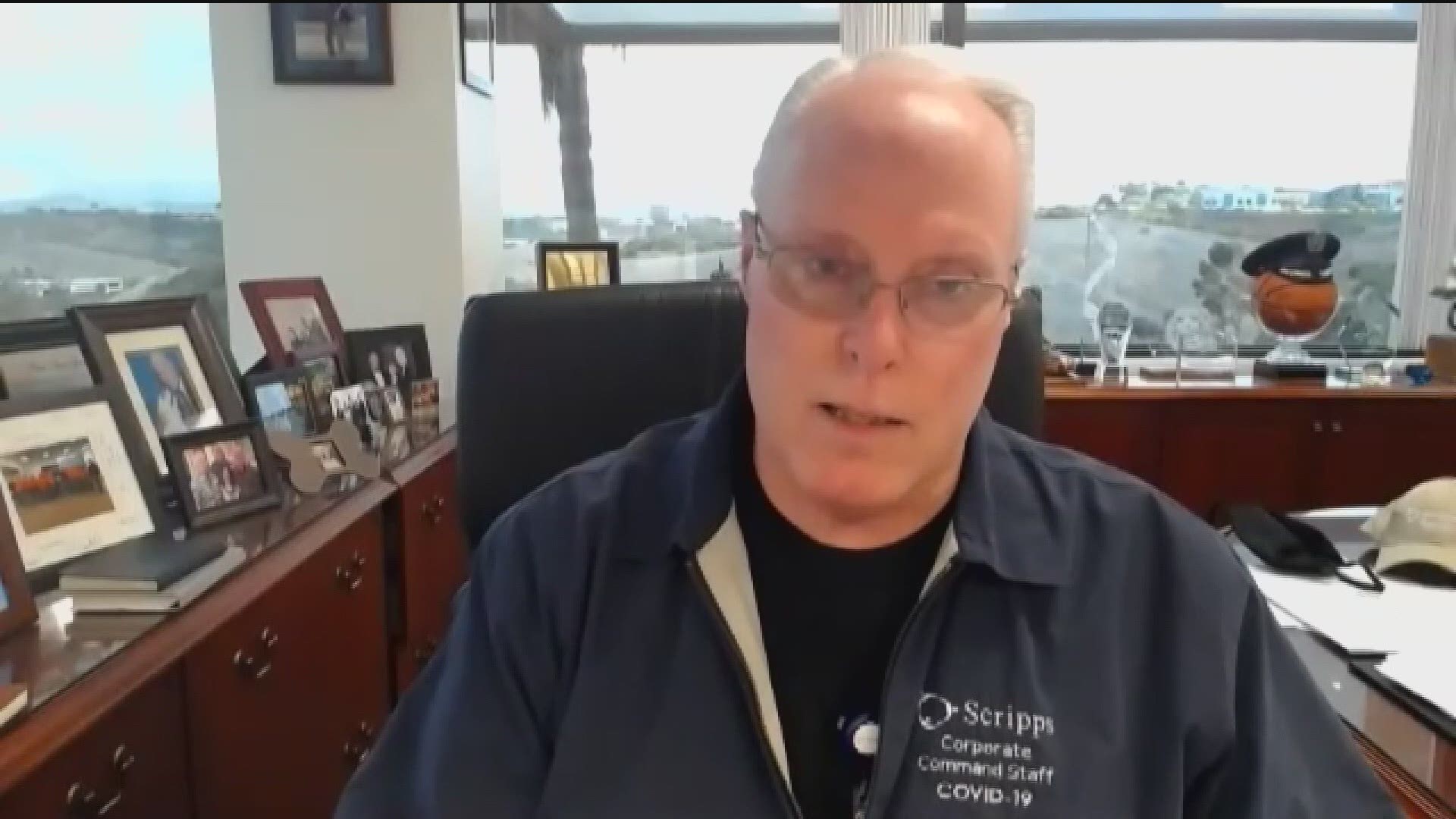 SAN DIEGO COUNTY, California — San Diego County will likely remain under a stay-at-home order after the state assesses its metrics Tuesday. Non-essential activities within the county along with others in the Southern California region were curbed three weeks ago when ICU capacity fell below 15% after a surge of cases from Thanksgiving.

A second surge is expected to begin two weeks after Christmas. News 8 spoke with Scripps Health CEO/President Chris Van Gorder about how his hospitals are trying to meet the demand.

The interview has been edited for clarity and length.

News 8: Give us an overview of how Scripps’ hospitals are doing.

CVG:  Well, as we predicted, we're getting busier and busier. We actually had an increase of 26 COVID patients from [Sunday to Monday], so we are now at 413 COVID-19 inpatients. Ninety-five of them are in the intensive care unit. Seventy-eight of them are on ventilators. We have 295 of those patients in Medical-Surgical Units.

As of this morning, I think Scripps Mercy Hospital had 17 COVID positives in the emergency room waiting for beds. So, and I think the same is true probably with almost all of the emergency rooms at this point, as we get more COVID patients that cannot go home, that need ventilating support or high-flow oxygen, they sit in the emergency department until we can open up beds.

Now we are discharging. We discharged 39 COVID patients home [Sunday], which is a good thing, obviously. Unfortunately, we're discharging fewer than we're admitting. So, our beds are filling up.

As of this morning, I had seven staffed ICU beds available. That's out of 173 beds and I had 20 staffed [medical surgical unit] beds available. That's out of 1,078 in the Scripps system. So, we're full and by the way, that's at surge. We're opening up new COVID units. We're opening up more ICU beds. Otherwise, we would have exceeded all of our capacity several weeks ago.

The staff's busy and they're stretching. I worry about the staff. They're working very, very hard. Many of them are taking on extra shifts during the week. The interesting thing my administrator up at Encinitas told me is ‘their attitude is good. They know that this is important for the community. They know they're working hard, but their attitude is good. They realize this is a necessary thing right now.’

News 8: We know staffing has been a challenge for all hospitals. How are you staffing those additional beds?

CVG: We're exceeding the staffing ratios, that's for sure. Normally we have fixed staffing ratios that are required by law and we are very diligent in following those, but the state has granted probably every hospital in the state, but certainly all of our hospitals have waivers because they know we would not be able to operate 173 ICU beds if we were forced to start staffing ratios. The staff just isn't there.

We're bringing in additional nurses that may not be ICU nurses, but they're supervised by ICU nurses to make sure that the care is still good. We're talking about bringing in EMTs, medical assistants and others just to support the RNs and give them extra hands so that they're not completely overwhelmed by the number of patients.

Up in L.A. County, there was actually an article that they were putting beds at one hospital in the gift shop. We’ve got surge plans to do that if we need to, but obviously we're hoping that that doesn't come to bear here.

It's all hands on deck. We have administrative nurses, who used to do clinical work, working back in the hospitals. I'm looking at potentially trying to get retired nurses that worked with us maybe a short time ago to come back and help support us.

Most of the work that we're doing right now is working on supplies. I'm looking at buying more outside surge tents because of the weather. Some of our tents are 25-years-old, so we're looking to bring in some new equipment for taking care of patients outside of the hospital, but the biggest working effort most of the time these days is spent on staff.

News 8: Are all of these patients from San Diego County?

Right now we are at more than 1,563 inpatients for just San Diego. So, we certainly have not been able to take any patients from Imperial County. Every day we are transferring patients from within our health care system to other hospitals that have some additional capacity.

Chula Vista would have been shut down weeks ago because they have so many patients. They’re at 100% [capacity] this morning and have patients in the emergency room waiting for admission. We will end up transferring some of those patients directly out of the emergency room to other Scripps hospitals. To date, we haven't had to send any of our patients to any other health care systems, but I suspect within San Diego, they're just as impacted as we are right now.

News 8: What’s the next step if hospitals can’t keep up?

CVG: We are already into surge. So, we're already into our disaster plan. I think every hospital in San Diego County has done that. We have the alternative care site now at Palomar. It's my understanding they have enough staff right now to be able to take care of about 20 patients. Ultimately, if they can get the staff to have some flex staff, up to 200 patients.

If we ultimately run out of equipment and we really run out of supplies, then we go into what's called crisis care and where we have to make decisions about which patient gets a ventilator, which patient is most appropriate to get an ECMO [Extracorporeal membrane oxygenation] machine or something like that.

We're not there now. In a sense, we are probably discharging some patients home that we believe are safe to discharge that, if all things were normal, we'd keep them maybe a day or two longer. There may be some patients that we would like to admit, but there's just not the beds to admit them to. So, in a sense, that's already crisis care, but it's not to the extreme at this point.

News 8: What scenarios are you preparing for over the next two weeks to handle a potential Christmas surge of cases?

CVG: The governor's right in the sense that we can have a surge on a surge on a surge. It's usually a week, two weeks after they test positive or become positive where their respiration starts to be impacted or they feel sick enough that they really have to go and get checked out at the hospital. So, it's really that second and third week, maybe even the fourth week, if they're very sick, that is where the hospitals get impacted.

Remember the length of stay for these patients, is probably averaging around 12 to 15 days, which is a much longer length of stay, but we have patients sometimes that are in the hospital for 30 days, 40 days, 50 days or longer. It's not that we fill up a hospital and these patients come in and they go home quickly. They come in and they stay on top of other patients that need a bed. And that's where the impact really comes in.

News 8: You have offered a blunt assessment of what’s happening. How has your messaging changed since the beginning of the pandemic?

CVG: I've probably always been blunt, but maybe I'm just getting a little blunter. I think in the early stages, we hoped that people would be thinking not only themselves but other people and even if it was not fun or uncomfortable, wear a mask, just do it. But we had the beds, we had the capacity and so I think we were all trying to be as politically correct as we can be. Follow the guidelines, but we're also nice people and we're here to take care of you. We're getting to the point now where this really is a crisis. We're not making this up.

If you were to go to the hospitals, and you don't want to be in the hospitals right now, the staff is really stretched. We're running out of resources now.

Thank God we ordered ventilators. I'm getting a whole new delivery of ventilators [Tuesday] that we ordered months ago, so supplies are a little better off than they were, at least for us, but again, the staff is stretched. We have even our own employees testing positive. Even a few more today got tested positive because they probably did what they shouldn't have done at Thanksgiving or Christmas as well.

We're losing our staff and there's just no staff to get. Today it's you know, as I said at the county briefing [last week], I'm almost pleading, please, please stay at home. I don't like to swear on TV, but we're damn tired of this. In fact, we're sick of it and I don't know what to tell people. We've got people dying in our hospitals.

Over this last weekend, we had one day where 10 patients died. I know Sharp had a very similar day where 10 COVID patients died. We had four this morning that got reported. We probably had more than 30 patients die over this last weekend. Our nurses, our doctors are their family members and so they're not only [physically] caring for them, they're caring for them emotionally and they're caring for their families outside of the hospital. This is a really serious issue and we're tired and we need, and we need our community’s support. They don’t see it, but they expect us to be here when they need us and right now, we might not be unless they help us.