"This is the only medication we have any indication of hope for. Politics aside, it's all anyone can do right now," said Julie Wright, CEO of DocTalkGo. 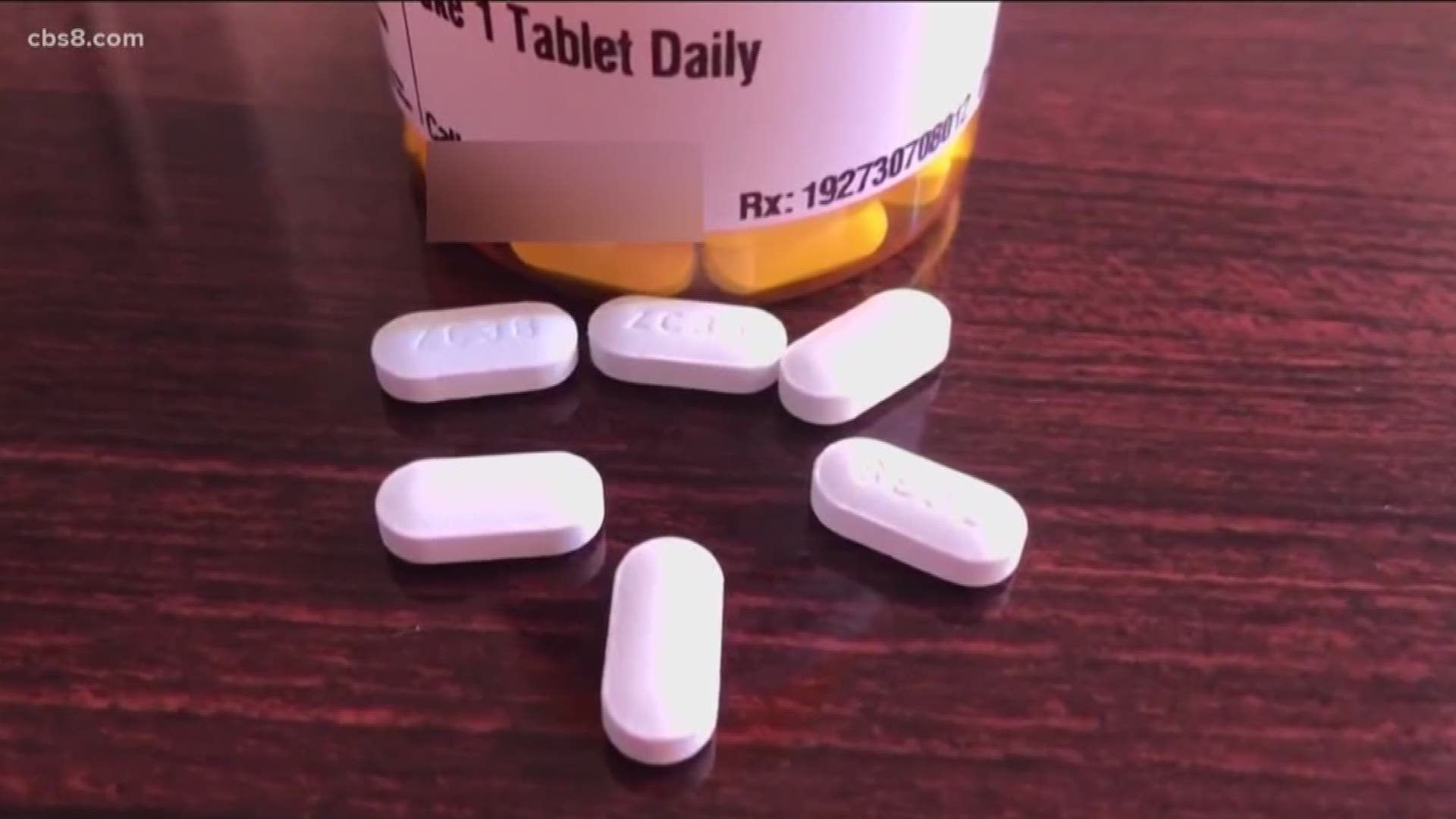 SAN DIEGO — As the number of coronavirus cases and deaths continues to climb, doctors, scientists, and health officials are in a race against time to find treatments that work.

While there are no FDA-approved drugs to specifically treat COVID-19, clinical trials are taking place across the country. Just this week, hospitals in New York, where 33,000 cases have been confirmed, began clinical trials using a combination of the anti-malaria drug hydroxychloroquine and the antibiotic azithromycin.

At the same time, a San Diego based telehealth company is announcing it has begun to prescribe the experimental treatment to patients who meet certain criteria.

"It's not fully understood how or even if it works," he said, "but the initial research is suggesting that it slows down the viral application, so that would help slow down the process and interrupt the transmission as well."

Last week, President Trump praised the two drugs as being potential game changers in the fight against the coronavirus, which to date, has killed more than 1,000 people in the United States, with the global death toll surpassing 22,000.

His promotion of the drugs sparked controversy surrounding the effectiveness of the treatment. It has also led to nationwide hoarding of hydroxychloroquine, leaving many pharmacies with no supply for patients with lupus and rheumatoid arthritis, who rely on the anti-inflammatory drug.

Rao says DocTalkGo, headquartered in Escondido, created a new division dedicated to helping patients with potential symptoms of the coronavirus prior to the President's announcement.

Through its website, www.CovidMedicalTest.com, patients anywhere in the U.S. can schedule a telehealth appointment with a doctor in its nationwide network.

"We have very strict criteria for when we do prescribe," Rao said. "We're only prescribing it for patients that have a known positive test."

Rao said the vast majority of people who call in with cold and flu symptoms, have a cold or the flu.

If a DocTalkGo physician determines a patient's symptoms are consistent with coronavirus, the doctor will give the patient a prescription to get tested for COVID-19 at a local site near his or her home.

The patient can later upload the results if the test is positive, and the doctor will determine if the patient meets the criteria for the experimental therapy.

"There is a cluster of side effects with this and some contraindications for both of these drugs, so all of our physicians are trained to prescribe the medication. We're not prescribing it for patients with cardiac disease, for example," Rao explained.

Heart failure and adverse psychiatric symptoms are among the potential side effects of hydroxychloroquine.

Rao said the treatment is only recommended in the most serious of cases that do not require hospitalization, and physicians adhere to Board of Pharmacy rulings specific to each state.

To date, DocTalkGo said its physicians have prescribed the combination drug therapy for about 20 patients. It began the service last week.

"We're trying to help patients stay out of the hospital, which is where the biggest health care burden is coming from," said Rao.

He said their mission is to help patients who develop significant symptoms, but who have not yet been tested or hospitalized.

Rao hopes the company's network of physicians can make a difference to keep those people from entering the hospital, if possible, helping to flatten the curve and relieving some stress from the healthcare system.

Critics say it's too early to be prescribing the combination drug therapy, but several clinical trials have been fast-tracked in the U.S., after promising results from patients who were treated with the drugs in China and France.

"The data is certainly thin, but from that, the patients that took the combination therapy improved fairly dramatically within six days," said Rao.

30 year old Yvette Paz, who was hospitalized with severe symptoms of COVID-19, said the drugs have give her relief from excruciating pain.

"I would say, since I started it I'm feeling so much better, but I'm definitely still fighting it," Paz said from her home in Huntington Beach where she continues to recover.

Responding to concerns from patients with lupus and rheumatoid arthritis who are angry and concerned about the lack of availability of hydroxychloroquine at their local pharmacies, Dr. Rao explained, "When we write a prescription for the medication, we don't send it to a local pharmacy because we don't want to interrupt that supply chain for autoimmune patients. We're using a mail-order pharmacy, wholesale pharmacy that will ship it directly to the patient."

Rao said if there are autoimmune patients who are running low, DocTalkGo can help fill their prescriptions at a discounted consult price of $29. Rao said his partner's mother has lupus and they want to help ensure patients who need the drug have enough until the supply is replenished, which could be several weeks as drug manufacturers ramp up production.

"The pharmacy that we're working with has a very strong supply chain because they're not a small retail pharmacy. They operate nationally and are big wholesale purchaser of the medications," Rao explained.

DocTalkGo said the pharmacy has hundreds of thousands of doses at this point. That said, Rao knows the stock could change at any time, which is why he said they are enacting strict guidelines when it comes to dispensing prescriptions for the experimental treatment.

Though the combination drug therapy is not FDA-approved as a treatment for COVID-19,  Rao said the medications are FDA approved for other purposes which is why physicians are able to use their judgment to prescribe the medications "off-label", for what's known as "compassionate use."

As a telehealth company that's been treating patients for a decade, DocTalkGo said its remote screening services can help provide answers to patients who are self-isolating or under self-quarantine due to known exposure to someone who's tested positive for COVID-19, minimizing the risk to others.

"This is the only medication we have any indication of hope for. Politics aside, it's all anyone can do right now," said Julie Wright, CEO of DocTalkGo.

The privately-owned company said its prices are competitive; a consult is $89, compared to a doctor's office visit which is often higher.