"We have a wildfire of COVID," said County Supervisor Nathan Fletcher, who added that convincing all San Diegans to comply is becoming more of a challenge 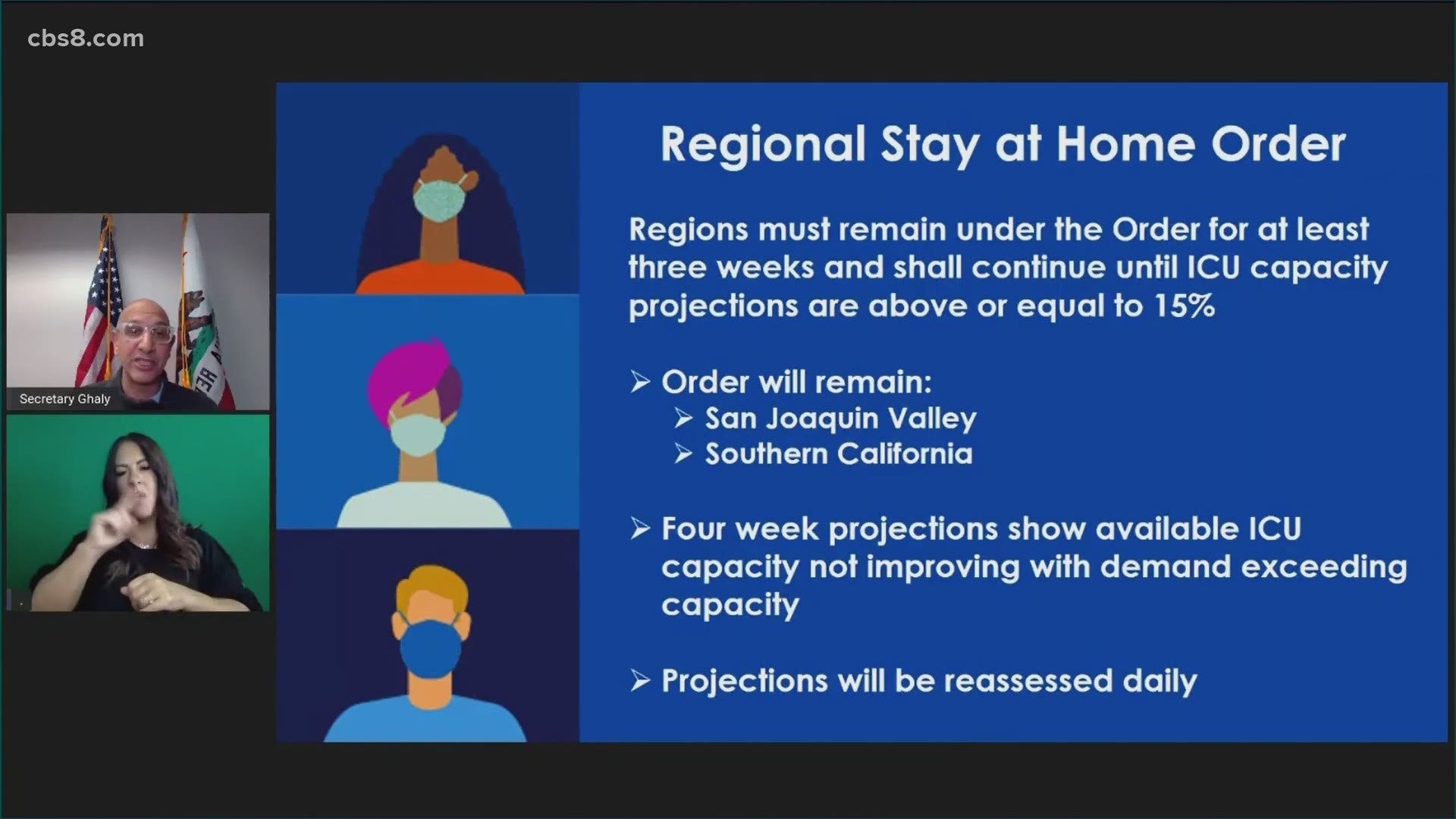 SAN DIEGO COUNTY, Calif. — As expected, a regional stay-at-home order in effect across Southern California due to surging COVID-19 hospitalizations was formally extended Tuesday, continuing a ban on all gatherings of people from different households and in-person dining and setting strict capacity limits at many businesses.

"The reality is that we have a wildfire of COVID," San Diego County Supervisor Nathan Fletcher said. "What you're really counting on is people looking at what's happening in our hospitals, understanding the reality of the situation and saying, 'I'm going to make a choice.'"

The state's regional order, which covers an 11-county Southern California area, took effect at 11:59 p.m. Dec. 6 and was set to expire Monday. But with the region's intensive-care unit capacity at hospitals still effectively listed at 0%, Gov. Gavin Newsom said Monday the order was all but certain to be extended.

The state's Health and Human Services Secretary, Dr. Mark Ghaly, made it official Tuesday, saying incoming COVID-19 patients are expected to continue exceeding hospital intensive-care unit capacity in the region over the next four weeks.

'We are essentially projecting that ICU capacity is not improving in Southern California, and that demand will continue to exceed capacity," Dr. Ghaly said during his press conference Tuesday.

Fletcher said that convincing all San Diegans to abide by the order is now even more of a challenge.

"You have elected leaders out there encouraging people to openly defy the order," he added. "The misinformation, disinformation continues to grow."

Local and state leaders are also encouraging all Californians to abide by the stay-at-home order especially when it comes to New Year's, strongly discouraging any mixing of households during what is ordinarily a highly social time of year.

The stay-at-home orders for San Joaquin Valley and Southern California are being extended.

We must continue to do our part to protect each other by engaging in fewer activities with fewer people, keeping masks on anytime you leave the house, and staying home. pic.twitter.com/6mFVYdHeAa

The renewed order was not extended for any specific timeframe. Ghaly said the four-week projections are evaluated daily, and the region can emerge from the stay-at-home order when the projection indicates its ICU capacity will rise above 15%.

With the Southern California region's current ICU capacity is still listed at 0% -- and health officials anticipating case numbers and hospitalizations to rise throughout January based on gatherings that likely occurred for Christmas and will again for New Year's Eve despite warnings -- the region is expected to remain under the order for weeks to come.

In anticipation of the state's action, Los Angeles County on Sunday night extended its local stay-at-home order, which essentially mirrors the state's restrictions.

Newsom noted Monday that COVID-19 hospital admissions have begun to plateau across much of the state -- except in Southern California, with Los Angeles, Riverside and San Bernardino counties continuing to be the hardest hit.

Los Angeles County has rapidly become the epicenter of the pandemic in the state, with the state reporting more than 7,400 COVID-19 patients in L.A. County hospitals as of Tuesday, including nearly 1,500 in intensive-care unit beds. Newsom said 96% of Los Angeles County hospitals diverted ambulances to other facilities at some point over the weekend due to overcrowding in emergency rooms -- up from a normal average of 33% of hospitals going on diversion.

According to Newsom, county hospitals on average spent 16 hours on diversion over the weekend, unable to find space for emergency patients.

Under the order, the following businesses/recreational facilities were forced to close:

Schools with waivers can remain open, along with "critical infrastructure" and retail stores, which will be limited to 20% of capacity. Restaurants are restricted to takeout and delivery service only. Hotels are allowed to open "for critical infrastructure support only," while churches would be restricted to outdoor-only services. Entertainment production -- including professional sports -- would be allowed to continue without live audiences.

The order was triggered in each area when the region's ICU bed availability dropped below 15%. In some counties, the official ICU bed availability is 0%. That percentage does not mean that there aren't any ICU beds available, since the state adjusts the number based on the ratio of COVID- 19 patients being housed in the units.

Newsom again had harsh words for counties and county officials who continue to "thumb your nose" at health orders. He singled out Riverside County, where Sheriff Chad Bianco has publicly criticized Newsom and said his agency would not be "blackmailed" into becoming an enforcement arm of state health officials.

Newsom has said repeatedly that counties that don't adhere to health restrictions would lose state funding.

"We're in the midst of a pandemic," Newsom said. "I don't know what more evidence you need, particularly, as highlighted, Riverside County is experiencing what they're experiencing in ICUs and hospitals and lives lost. I mean, what more evidence do you need that trying to enforce good behavior will actually save lives? It's a noble and right thing to do.

Bianco, in a video message posted online earlier this month, called state health mandates "flat-out ridiculous," while calling Newsom's stances hypocritical in light of his criticism of the federal government for withholding funds from states, and following Newsom's well-publicized attendance at a dinner party in spite of his own regulations against such gatherings.

Bianco told residents in his message to wear a mask and practice social distancing, but said, "While the governor's office and the state has threatened action against violators, the Riverside County Sheriff's Department will not be blackmailed, bullied or used as muscle against Riverside County residents in the enforcement of the governor's orders."