Students at SDSU, USD move out of dorms amid coronavirus pandemic 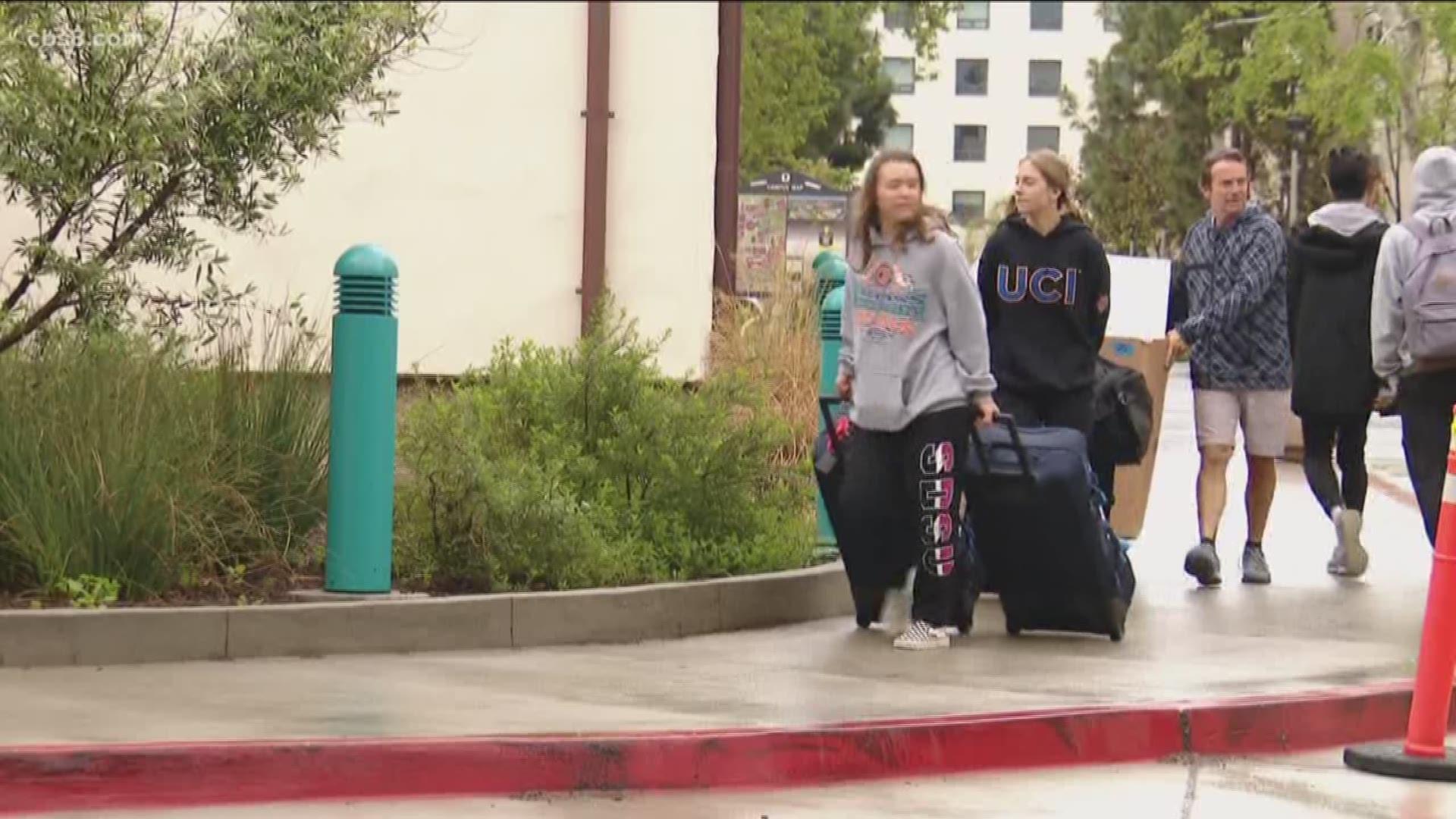 SAN DIEGO — Students at University of San Diego and San Diego State University moved out of their dorms Wednesday amid the coronavirus pandemic.

San Diego State University announced on Tuesday that it would be closing “all residential communities” on Wednesday at 7 p.m. for the remainder of the semester, except for those with “extenuating circumstances.”

“Exceptions will be made for those who cannot go home, those who have known health or safety risks, and for those students who do not have an alternate residence to return to,” said an SDSU spokesperson.

Students were asked to return to their permanent address, although the university noted that many students have already moved out. According to SDSU, students will be reimbursed for the remainder of their contracts and unused meal plans effective Tuesday, March 17. Students are asked to complete a survey online.

“It was kind of crazy to try and get all of our stuff out,” said SDSU sophomore Sophie Nelson.

Students grabbed all their belongings to get out of the dorms quickly.

"We were told midday yesterday that we had to be out by 7pm tonight,” said Nelson, who planned to drive home to Los Angeles after the move.

“It's kind of confusing that they're trying to get everyone out on the same day by the same time because if you're trying to reduce an influx of people, seems a little counterproductive,” she said.

Students made the fast move out of resident halls as the rain poured.

“You can plan for the rain, you can't plan for having to shift your schedule in the rain,” said SDSU sophomore Gabriel Polluck.

Many Aztecs said they know clearing the dorms as a coronavirus precaution is for a good reason, many just wanted more notice.

“I am annoyed with the administration because the messaging was so scattered shot,” said Polluck who hails from Orange County.

Polluck’s father Bryan said abrupt changes are “our reality now, and to cry about it or be upset It's not doing any good."

While students are asked to bring important belongings with them like their passport and schoolwork, the university said it is okay to leave non-essential items behind for now.

“It cannot be determined at this time when you will be able to collect any left belongings,” said a spokesperson for SDSU.

University of San Diego had originally asked residential students to move by March 22, but sent a memo Tuesday advising that all students should move out of their dorms by late Wednesday.

The memo stated that due to the health crisis in San Diego and the San Diego County public health order they are asking those who can move out within the next 24 hours to do so.

Other local campuses are following suit Including University of San Diego releasing this statement on March 17: "We are asking those who can move out within the next 24 hours to do so."

UC San Diego said online: “To lower the density on campus, we are strongly urging students who can safely leave to do so as soon as feasible, but no later than March 29.”

“I was up until like two in the morning just cleaning everything,” said SDSU sophomore Michelle Cross.

Cross runs track, and is headed to the Paralympics in Tokyo in August, so she is used to moving fast.

“It's been very crazy since I live in a suite style apartment we have to clean everything out, so we had to scrub the showers, scrub the fridge, scrub the microwave," said Cross, who was headed to Orange County with her parents and older sister.

With help from her family, everything got in one truck and an SUV well.

"She was stressed, but we made a plan at dinner last night and said let’s pack her up and get her home,” said Michelle’s father Darrell Cross.

"We realize there are some cases where travel plans have been scheduled for later in the week, but we must stress the importance of accelerating relocation plans for the safety and wellbeing of our community and compliance with the San Diego County Public Health Order," per the memo.