The people were issued a misdemeanor citation for violating the stay-at-home order and stepping foot onto a closed beach. 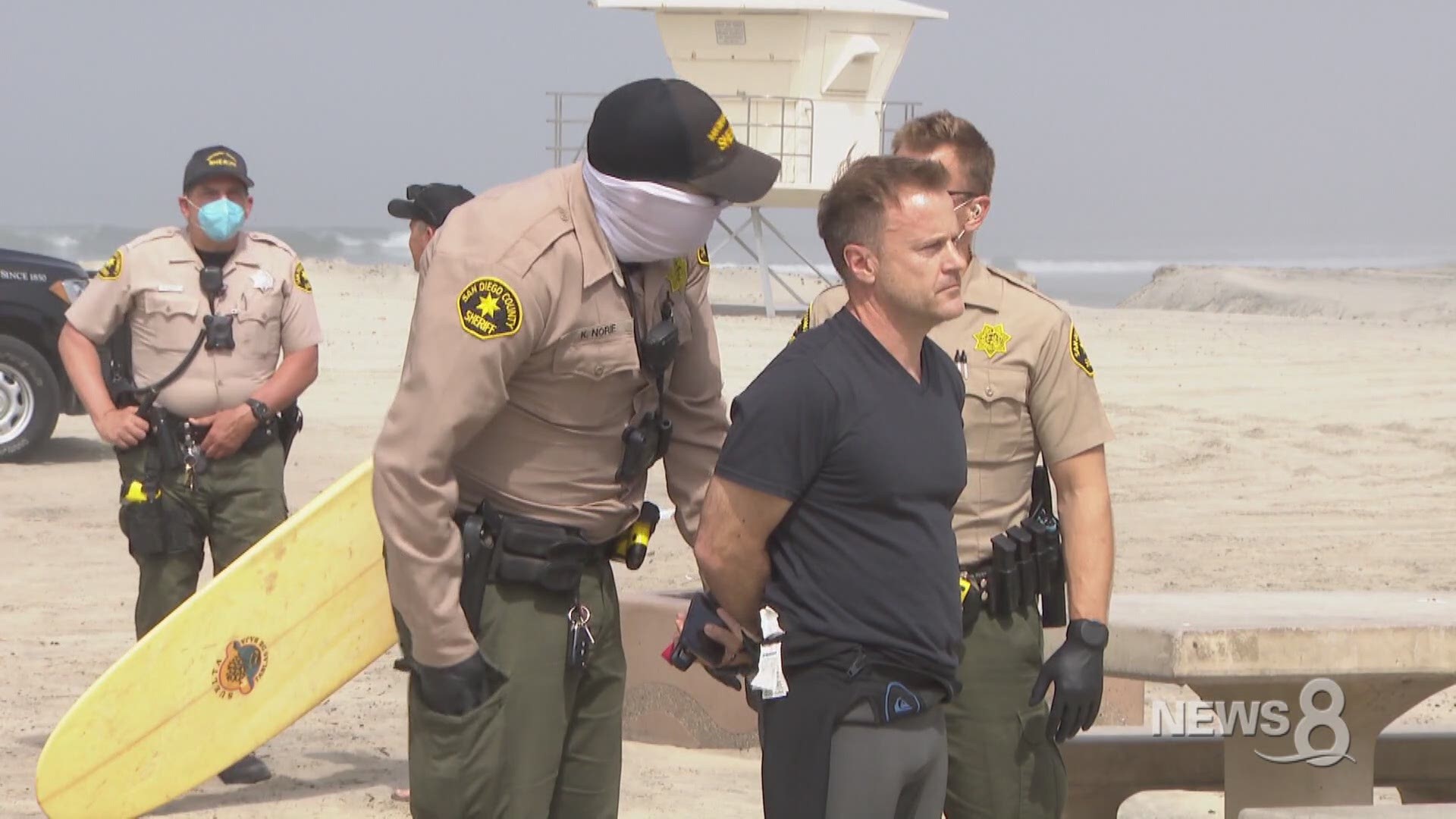 ENCINITAS, Calif. — Even though some beaches are set to open on Monday, the rally cry for protesters in Encinitas on Saturday was they want them opened immediately. Some walked beyond the yellow caution tape before either being warned or arrested by deputies and escorted off the beach.

Chanting “This is our right” and “Open our beach,” protesters clashed with San Diego County Sheriff’s deputies at Moonlight Beach.

Alexis Hordowich said her husband was one of the three men arrested Saturday.

“I’m mad because it’s not fair for anybody to go through that, like this is his daughter, she is going to grow up in a horrible world if we don’t stand up for our rights,” Hordowich said in tears.

Hordowich said she is from San Diego, and her husband was fighting for his right to be on the beach despite its closure.

“This protest is to keep everybody together - America together. He was just sitting on the beach relaxing, and they arrested him,” she said.

Bryan Wagler who was among those arrested Saturday spoke to News 8 about his participation in the protest: 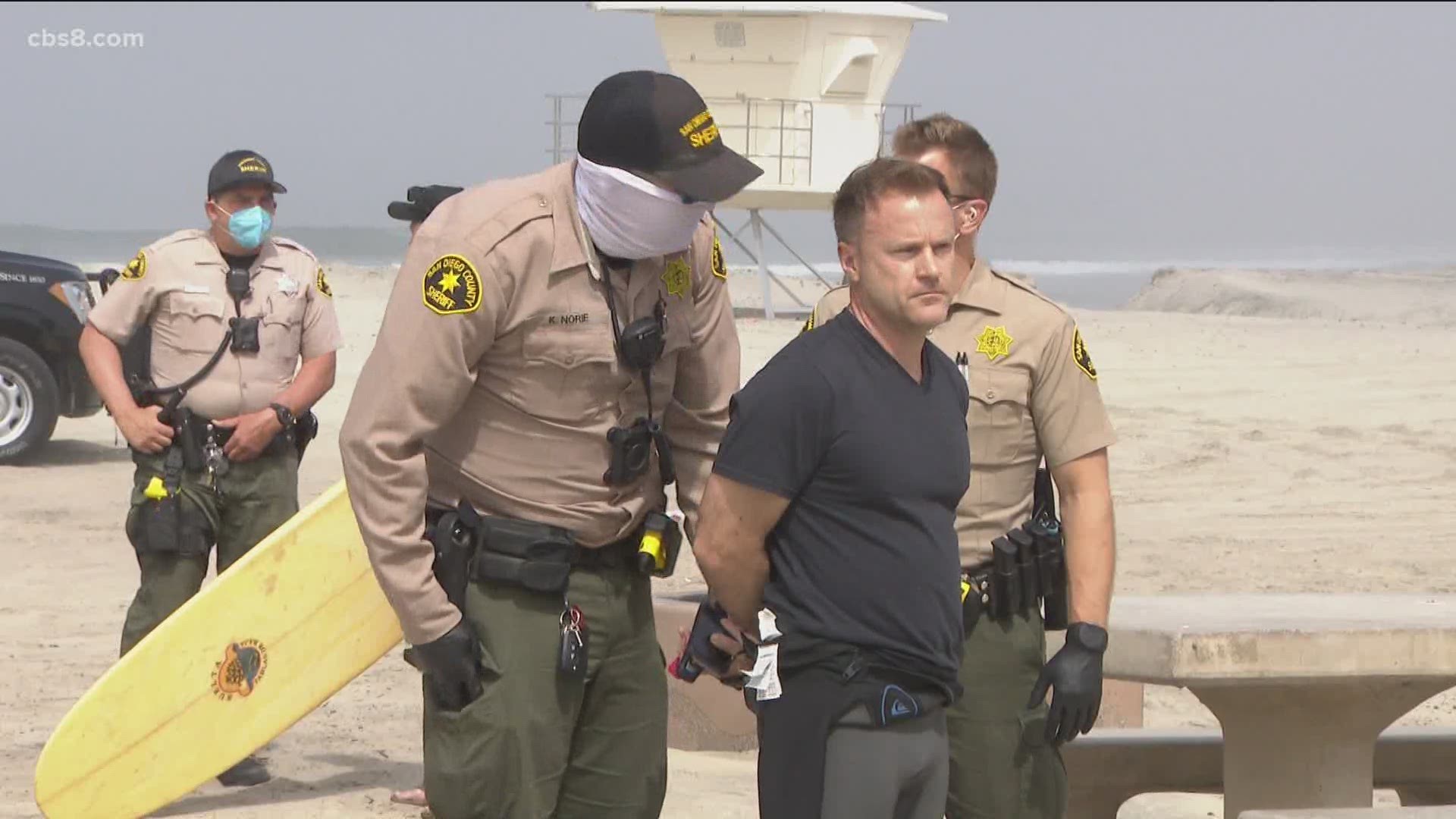 Law enforcement surrounded the rally using patrol cars, motorcycles, and a helicopter. Lifeguards got in the water on jet skis to make sure no one was in the ocean.

Over the intercom, deputies announced: “You are gathering in violation of the public health order,” to which the protesters shouted obscenities.

Protester Crista Curtis didn’t back down. She chanted “Let him go,” each time someone was arrested.

Curtis organized the previous weekend rally in Encinitas, and deputies recommended charges against her to the county district attorney.

“They said they were going to cite me, and I said 'cite me,' they have no grounds for citations right now and they know that, so they’re taking those arrested to the police station, and then they are going to let them back out,” Curtis said.

Frustrations to get in the ocean boiled over despite many beaches in the county set to reopen soon.

“I don’t care that they’re opening the beach is on Monday, they’re still putting all these restrictions and rules on us as to how we can use them, but this is our beach,” said Curtis while holding a bright red “Free Encinitas” poster.

Curtis said she wasn’t concerned with rising numbers in coronavirus cases and deaths.

“We all have to get this virus in one way or another, I shouldn’t have to keep walking, I should be able to lay on my towel with my friends and my family and enjoy the beach,” Curtis said.

In addition to the arrests, sheriff’s deputies issued one traffic citation and seven parking citations.

At least three people were arrested on Saturday during a protest at Moonlight Beach in Encinitas. They were cited for violating the stay-at-home order and congregating on a closed beach

RELATED: San Diego leaders lay out plan for how to reopen beaches county-wide