Along I-805 Southbound, rows of tents of trash bags can easily been seen on the embankments. 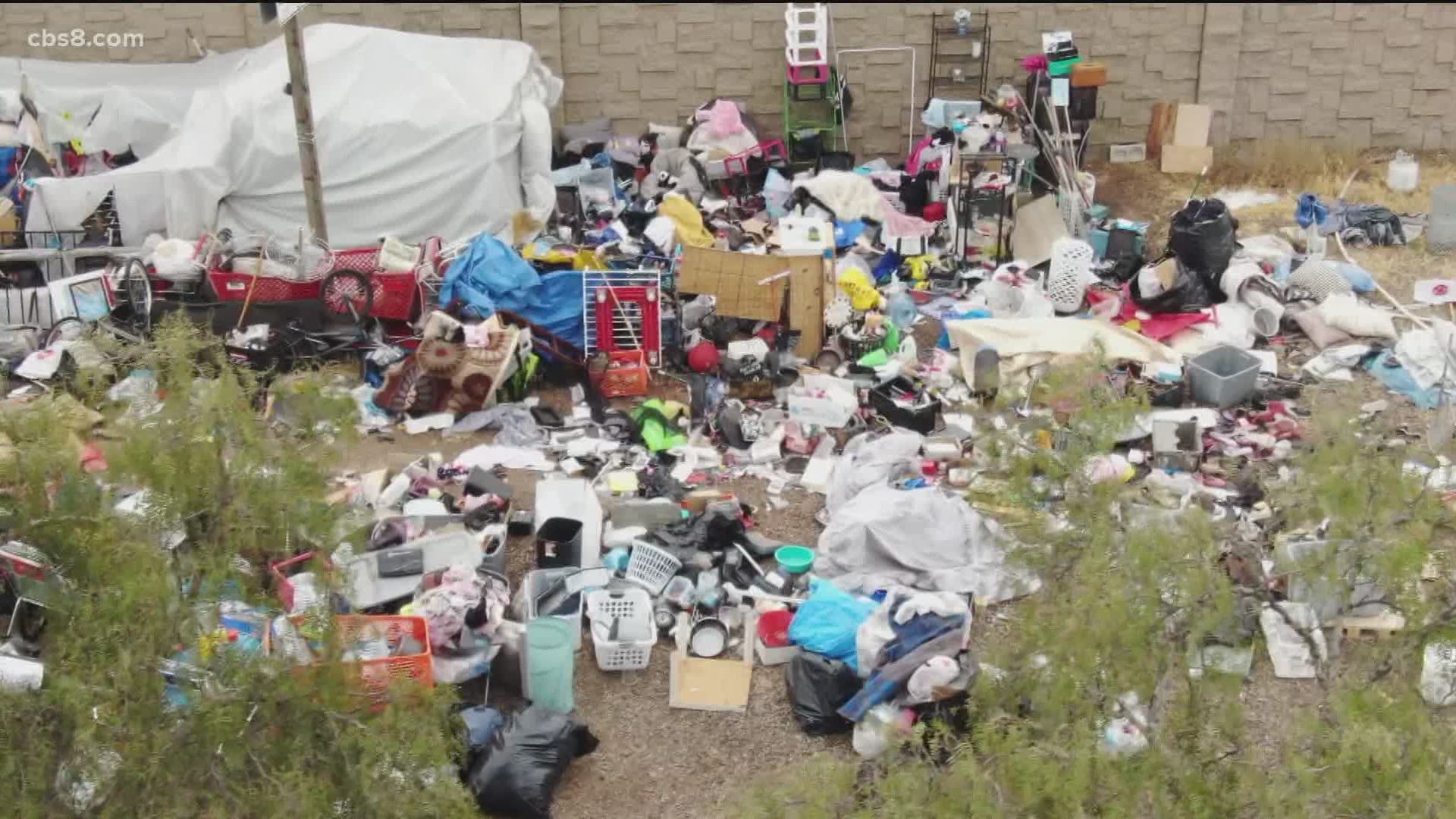 NATIONAL CITY, Calif. — Fed up over the growing homeless encampments in San Diego's South Bay along the 805 freeway, National City Mayor Alejandra Sotelo-Solis said the city has done clean-ups and tried to provide resources to those living in tents, seen visibly from both sides of the 805.

"This it's not okay, and National City is not accepting it. We can't talk anymore, there needs to be action. It's being aggressive. It's being compassionate. It is also saying, 'enough,'” said Sotelo-Solis.

The need for shelter shot up during the pandemic with record job loss, and the California Department of Transportation not clearing out the encampments regularly due to COVID-19 safety protocols.

"The pandemic has given us more eyes to see what's going on in the community, We are done. It's about finding them housing and getting them the wraparound services that they need," Sotelo-Solis said.

In April News 8, went inside the homeless encampment and met Junior Bautista, who said he was living in a tent with nowhere else to go.

"We really don't want to be here. Housing would be nice,” Bautista said

Ron Morrison, National City Councilmember said, "When people drive through our city, this is what they see, and they think that is National City, and they don't realize that is state property."

On Tuesday, Caltrans posted a "Notice to vacate illegal campsite," which stated all occupants and camp debris must be removed, and any property left will be considered abandoned. Violation of the order will result in citation and/or arrest.

Robert, who didn't want his face shown on camera, lives in the encampment after just getting out of prison.

"I didn't ask to be released. They released me early,” Robert said

Robert said he'd rather stay locked up with guaranteed shelter than being outside along the 805.

"At least I had a cell and a TV, but here I have nothing,” Robert said.

A statement from Caltrans reads in part:

“The encampment at I-805 is scheduled for removal in the next 10 days after an immediate fire threat was identified following a blaze at the location on Saturday, May 15.

Mayor Sotelo-Solis is hoping the California Governor's budget will provide the money for housing for the hundreds without a home.

Robert said, “You got two days to get the hell out of here, and the thing is like OK, now where are we going to go?"

The state's notice to vacate at 805 Southbound Plaza Blvd to 16th St. overpass has a vacate date of Friday and removal by May 25 at 3 p.m.

At National City, CA #Homeless Encampment, where @SDCaltrans posted a Notice to Vacate Illegal Campsite at I-805 Southbound at Plaza Blvd onto 16th Street by May 21. Tents & Debris Removal on May 25. We hear from @alesotelosolis calling for more help and housing.@CBS8 @DeskEight pic.twitter.com/MAZKHqFX2Y