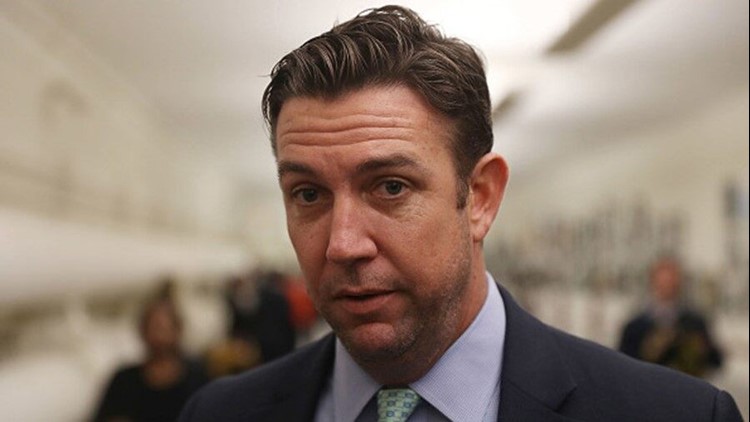 Photo by: KFMB via AP

LOS ANGELES (AP) — Lawyers for California Rep. Duncan Hunter want a federal judge to reject an attempt by prosecutors to introduce evidence that the congressman used campaign funds to finance a string of extramarital relationships, a court filing said Friday.

In the eight-page document, Hunter's lawyers argue that prosecutors are seeking permission "to focus the jury's attention on Mr. Hunter's infidelity" with evidence that isn't necessary for a jury to evaluate the case. To allow it, they wrote, would present "substantial risk of unfair prejudice."

"Evidence of Mr. Hunter's 'intimate affairs' is not directly relevant to the ultimate issue in this case, whether Mr. Hunter knowingly converted campaign funds to his personal use," they wrote.

Allegations about the married Republican congressman's affairs were outlined in a government court filing Monday, connected to charges he and his wife illegally spent more than $250,000 in campaign funds on trips, meals and other personal expenses.

Prosecutors are seeking permission to introduce details of the romantic affairs in U.S. District Court in San Diego, which they say are necessary to "demonstrate Hunter's ... intent to break the law and to establish his motive to embezzle from his campaign."

Margaret Hunter pleaded guilty this month to one corruption count. Duncan Hunter has said prosecutors have targeted him for political reasons.

The trial is scheduled for September.

In the motion, Hunter's lawyers argued that "whether or not Mr. Hunter has an intimate or strictly platonic relationship with a particular individual does not tend to prove any material point in the government's case."

They said "nearly every expense" listed in the prosecutors' motion Monday seeking to introduce the evidence "was incurred in connection with a legitimate political activity."

"In its quest to highlight the intimate nature of these relationships, the government fails to meaningfully consider the fact that, just as with Mr. Hunter's platonic relationships, his friendships often blur the line between personal and professional, which is a widespread occurrence in modern politics," the lawyers said.

"However unpopular the notion of a married man mixing business with pleasure, the government cannot simply dismiss the reality that Mr. Hunter's relationships ... often served an overtly political purpose that would not have existed irrespective of his occupation," they wrote.

They added that the allegations are so controversial "that merely filing the motion has tainted the jury pool against Mr. Hunter."

Separately, Hunter's lawyers are seeking to dismiss the indictment and move the trial out of San Diego County.