People on both sides interfaced with one another sometimes getting into heated shouting matches during the rally. 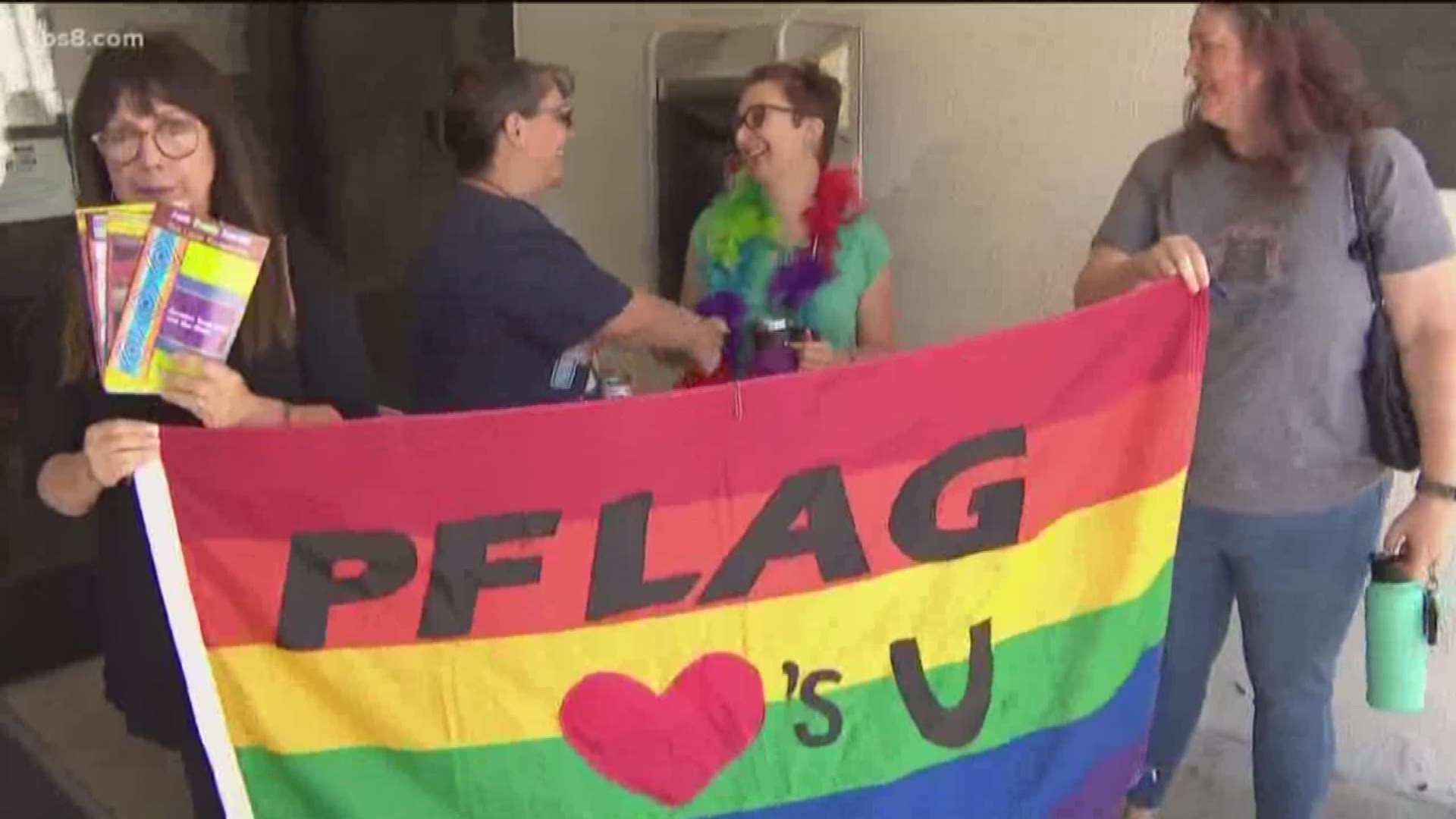 CHULA VISTA, Calif. — Conservative group MassResistance held a rally Thursday to speak out against the “Drag Queen Storytime” coming to Chula Vista’s Otay Ranch Library next month. The group led by activist Arthur Schaper spoke in front of Chula Vista’s main branch starting at 1 p.m. while LGBTQ supporters stood nearby with their own signs and a Pride flag.

Drag Queen Story Hour has gained popularity across the U.S. and the local version - “Drag Queen Storytime”  - is a partnership between the city of Chula Vista and San Diego Pride and the South Bay Alliance, but some critics say it sends the wrong message.

"Drag Queen Story Hour is not innocent fun to celebrate play while teaching diversity and tolerance," said Schaper. “If adult entertainers engage in those behaviors, they can do so freely in their nightclubs and cabarets but not around children."

MassResistance organized the rally and were joined by faith leaders. Those opposing the event cited their concern for children saying the reading would confuse them and calling drag queens “perverted.”

Member of PFLAG showed their support for "Drag Queen Storytime" at the rally with signs and their voices.

“The Drag Queen Story Hour helps teach them about the acceptance of all," said Dennis Nicely.

Others echoed the sentiment that the event promotes tolerance and diversity.

"We are here to represent community values, which are inclusiveness and acceptance, love and diversity," said Irina Sagade. "These are values of a public space."

The dialogue between the two sides got heated at time especially between supporters of the program and conservative leader Schaper.

The Chula Vista Police Department had several officers on scene to keep the crowd under control.

She broke down in tears saying "Wake up, America, wake up."

The drag queen reading is slated for Sept. 10 during South Bay Pride Week. Parents have to sign their kids up for the reading.

In support of Chula Vista’s Otay Ranch Branch Library planned “Drag Queen Story Hour” event, Caroline Dessert, Esq., chief executive officer of The San Diego LGBT Community Center issued a statement that read in part: “Drag Queen Story Hour provides a fun and engaging way to promote literacy and to help young people understand the value of diversity and acceptance. These types of events also offer us a chance to appreciate individuality and combat harmful gender stereotypes. With that in mind, it easy to understand the reasons that American Library Association is supporting Drag Queen Story Hours as an effective way to add inclusive, diverse, and more equitable programming at public libraries."

The city of Chula Vista issued a statement on the storytime that says, in part, “The Chula Vista Public Library welcomes everyone, and our extensive programming includes and reflects the diverse communities we serve. Hosting drag queens to read and relate with children sends a message of acceptance and tolerance.”

Openly gay Chula Vista City Council member, Steve Padilla has also voiced his support for “Drag Queen Storytime” with a statement on his Facebook page reading, in part: “I am disappointed that some voices both from inside and outside our community have chosen to use the upcoming Drag Queen Storytime as an opportunity to perpetuate long discredited false and discriminatory narratives targeting the LGBTQ+ community in the name of protecting children.”