San Diego Police Department said it will work with the San Diego Sheriff’s Department to ensure compliance of laws. 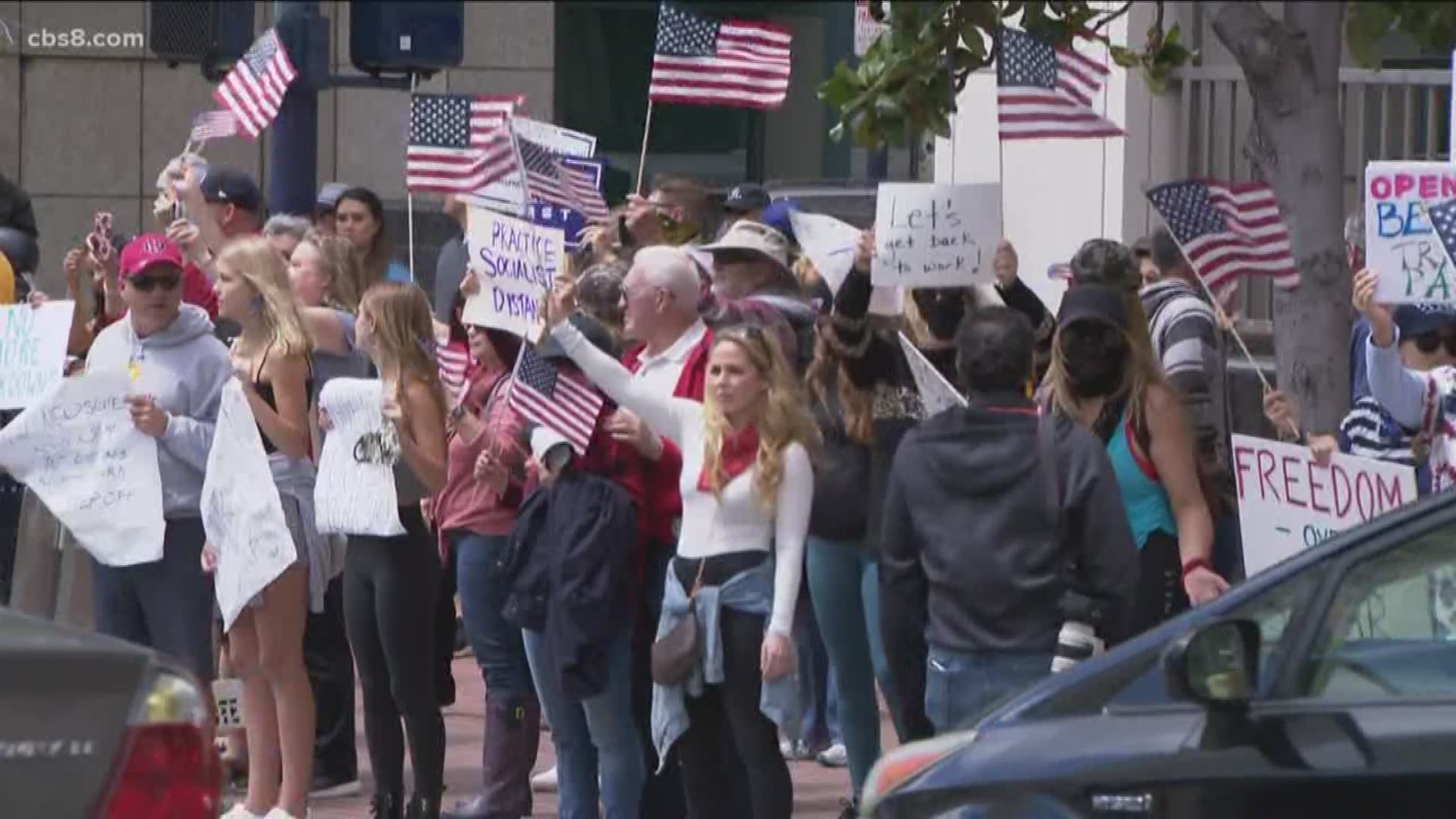 SAN DIEGO — A couple hundred San Diegans took to downtown Saturday afternoon defying "stay-at-home" orders to gather for a “Freedom Rally." Protesters want businesses and beaches to open up now, citing only a small number of our population has been infected.

"It’s not fair to the rest of us who don’t have COVID-19, we all need to get back to work and open things up and get back to normal," said commercial real estate owner Ella Conrad of Carlsbad.

A few hundred people protested that San Diego County re-open for business and life as usual. All part of the Freedom Rally in downtown in front of the Hall of Justice. Some honked from the roofs of their SUV's.

One man's sign said "Let my people Golf," another sign said "I am so totally over this."

The crowd chanted: “What do we want, freedom, When do we want it now!”

With more signs saying "Quarantine Newsom" and others holding “Trump 2020” banners, the rally got political.

“It is a little partisan unfortunately, I’m not here as a Republican or a Democrat, but as a citizen, who is concerned about people who have lost their jobs temporarily and sadly in many cases permanently,” said Brian Epperson, a small business owner in San Marcos.

Epperson runs an advertising agency of 22 employees. He says the $350 billion loans that went out are only reaching a small portion of businesses. He held up a sign that read: Save Lives, save jobs, Open businesses back up."

"I think every business owner would be willing to put in in safe procedures and protocols in order to start serving customers again,” Epperson said.

As crowds chanted, many were not social distancing on the side walk and stood in close packs. Protesters were also largely not wearing masks.

The San Diego Police Department had officers in position surrounding the rally, all were wearing masks. The Freedom Rally organizer Naomi Israel said she did not want to do a TV interview because she says she has received death threats for her views on wanting lockdown orders lifted.

“It’s not fair to ruin the economy for 40 million people Gavin, let us all go back to work,” Conrad said while holding two signs that read: “Set us free” and “Freedom of assembly.”

“I am a small business owner, and I am going to lose half of my income this year, I own commercial real estate and the people like McDonald’s, Dunkin’ Donuts and more, they can’t make their rent payments, but I still have to pay the bank, all my mortgages are due every month, there is no relief for me,” Conrad said.

The death toll in San Diego County topped 70 and deaths in California exceed 1000.

“It’s the flu, for the people who have poor health, they are always the most vulnerable, God bless them, of course, I feel sorry for all lives lost, but we have to get back to work because the rest of us matter too,” Conrad.

Freedom Rally
Event by Naomi Israel on Saturday, April 18 2020 with 368 people interested and 143 people going. 28 posts in the discussion.