Gov. Newsom teared up when talking about the death of George Floyd in Minnesota. 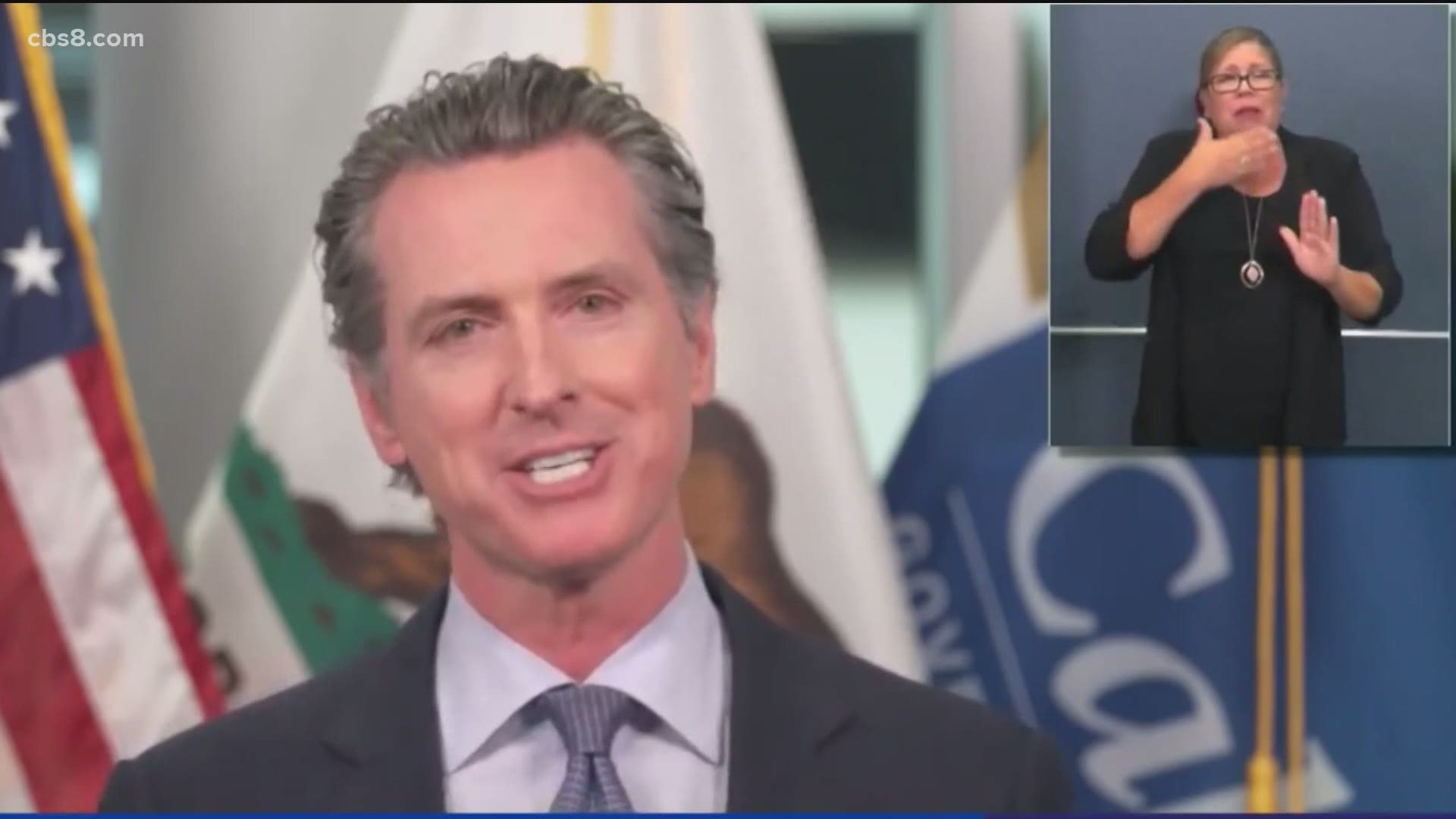 SAN DIEGO — Governor Gavin Newsom spoke Friday about an incident involving the arrest of a black man in La Mesa during an emotional speech on race relations.

Newsom also became emotional when speaking about the death of George Floyd in Minneapolis and police conduct in America.

You can watch the entire briefing here.

The video posted on social media showing the arrest of Amaurie Johnson, 23, in La Mesa clearly was on Newsom's mind as he spoke during his news conference from Sacramanto.

“We’ve made a lot of progress in this state, but my gosh, I was reminded again even this morning, an incident down in San Diego, a young man on a bench,” Newsom said.

Newsom spoke about 46-year-old George Floyd, the father of two who lost consciousness and died while being pinned down by the neck by a Minneapolis police officer.

“We are so much better than that and so I sit here deeply humbled, a little bit emotional about this moment, and deeply resolved to try and meet it head on and to more and do better,” Newsom said.

Newsom recalled the day his three young children saw the video on social media. Newsom said his daughter showed it to him.

“She had the video on TikTok of a police officer. A white police officer's knee was at the neck of a man who was desperate to breathe, a my daughter wanted to make sure I saw it.  Sshe was trying to reflect – 10 years old – on what it meant.  And here she was, tearing up because she knew it was wrong,” Newsom recalled on Friday.

Later in his speech, Newsom teared up, himself.

“We have to be more resolved now than ever to do more and be better as human beings, as parents, as leaders in our own right - and to model better behavior and soften the edges and make the spirit of Dr. King and Kennedy and make more gentle the life of this world,” Newsom said.

San Diego Mayor Kevin Faulconer Friday condemned the actions of a group of former Minneapolis police officers -- one of whom is now charged with murder -- that led to the death of a handcuffed black man and has sparked protests across the country.

Faulconer began his daily news conference, which has typically provided updates on the region's COVID-19 situation, by calling George Floyd's death "a tragedy" and saying he stood with the San Diego Police Department in condemning the officers' actions "in the strongest possible terms."

"It never should have happened," Faulconer said. "George Floyd should be alive today. Those Minneapolis officers robbed him of his life. Their actions were wrong and this is unacceptable."

Faulconer echoed sentiments expressed this week by San Diego Police Chief David Nisleit, who issued a statement that read, "Our profession must do better. We will continue to work tirelessly to build trust, establish clear policies, ensure consistent training, and maintain open and honest dialogue with our communities."

"The men and women of the San Diego County Sheriff's Department hold ourselves to a very high standard and work every day to build trust with the communities we serve," Gore said. "Mr. Floyd's death in Minneapolis is a harsh reminder of how the actions of a few can quickly erode that trust. We must do better."

RELATED: 'Justice for George Floyd' is largest-ever US petition on Change.org