It’s been a record-breaking year for wildfires in California. In San Diego County, communities near Jamul and Alpine are still recovering from the Valley Fire. 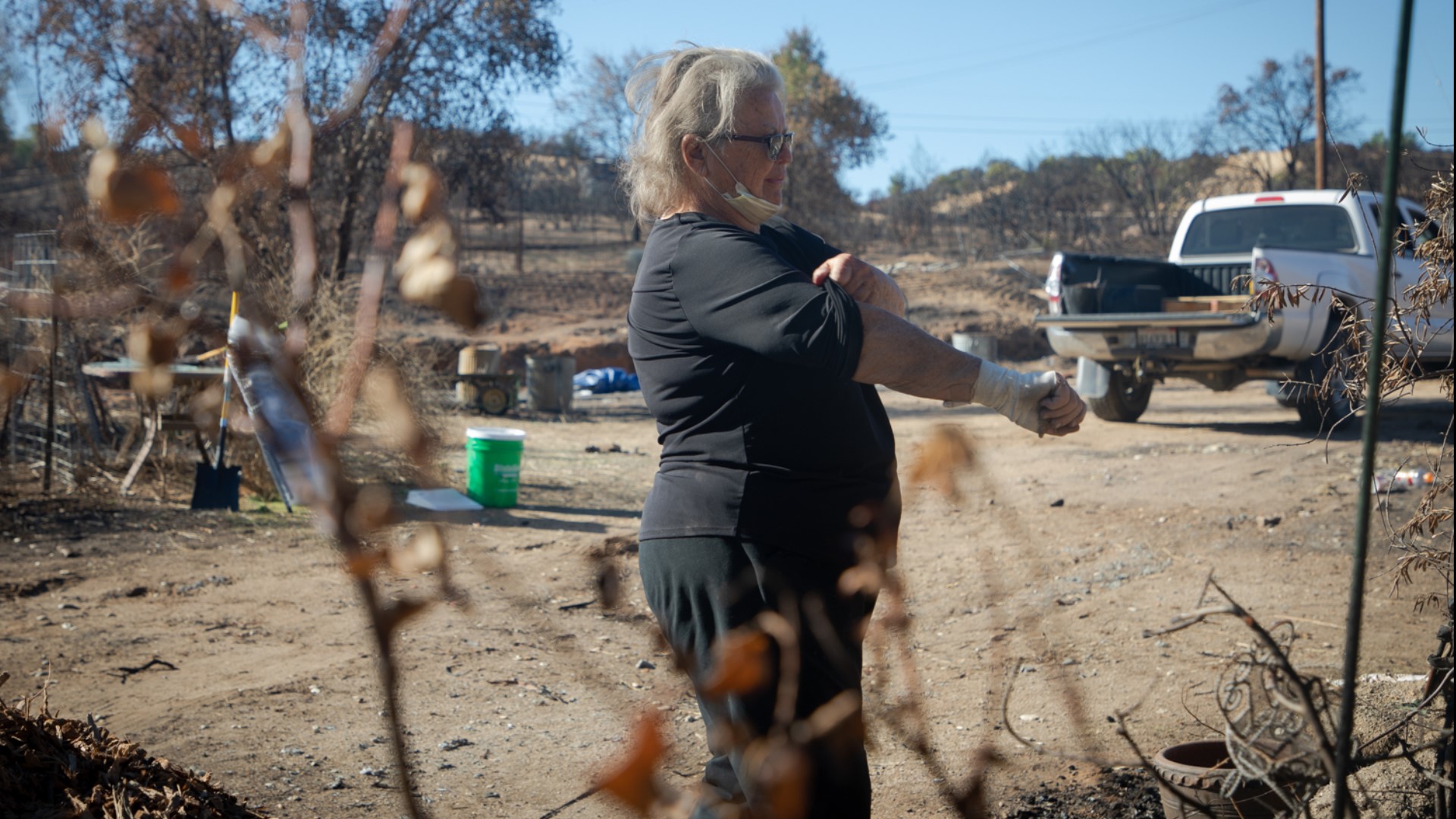 SAN DIEGO COUNTY, California — Nearly three months after San Diego County’s most destructive fire of 2020 burned down her Lawson Valley home, 78-year-old Eileen Menzies spends her days sifting through the rubble she has yet to completely clear from her property.

A neighbor whose new hemp farm was nearly destroyed is meeting with lawmakers in hopes of improving agricultural insurance in fire-prone areas. And two miles across the hills to the north, a longtime resident has been unable to claim benefits from the county and federal government for the loss of his home and vehicles because he doesn’t have all the necessary paperwork.

They are among the people now navigating a piecemeal recovery after losing homes and businesses in early September when the Valley Fire erupted near Jamul. Their obstacles are multiplied in communities across California like never before after this year’s record-breaking wildfires burned more than 4 million acres and nearly 11,000 structures, the consequences of a hotter and drier climate and mismanaged forests.

The full cost of the Valley Fire has not yet been finalized. Neither has who will pay for it all.

The Valley Fire began on Sept. 5 and quickly tore through dry grass and chaparral amid a heat wave. The cause remains under investigation. Hundreds of firefighters maneuvered the hilly terrain over several days to protect homes and contain the flames. The fire eventually burned 16,390 acres.

Credit: Erik Anderson/KPBS
Firefighters block the road on Sept. 6, 2020, as the flames from the Valley Fire burn behind them at Japatul and Carveacre roads, southeast of Alpine.

County staff has tallied $1.57 million in damage to agricultural operations, including the hemp farm, a vineyard and a ranch. So far, the county has shelled out at least $2.6 million for its fire response and recovery efforts, according to preliminary estimates.

The city of San Diego also suffered about a $4 million loss when Camp Barrett, a former youth detention camp on city land in rural Alpine, burned.

Even with insurance, recovery drags on

Menzies said she fled the fire once it crested the ridge above her property, about 10 miles from Jamul off of Lawson Valley Road.

“Almost every year, we had to worry about it, but this was the first time it came over the hill,” she said. “And there was absolutely no help in sight.”

The fire burned her 1972 mobile home, a travel trailer, and five storage studios for her arts and crafts. Some of her animals, including a goat and peacocks, didn’t make it.

Credit: Zoë Meyers/inewsource
Eileen Menzies property in Lawson Valley, which burned in the Valley Fire, is shown in the foreground of this photo, Nov. 18, 2020.

The hill above the mobile home where she lived is scorched black. She considered selling the 5-acre property and leaving but couldn’t get a good price for the land. Now Menzies, who’s temporarily living with her daughter in Spring Valley, is determined to rebuild and hopes she can be back within six months.

She is still working on restoring electricity to her property, which she needs for her well. Most days, she dons a face mask to protect against the dust as she goes through the rubble, looking for pottery, melted metal, and nails and screws that she may be able to recycle or use in art pieces.

Credit: Zoë Meyers/inewsource
Eileen Menzies sorts through screws and nails from the rubble that remains on her property in Lawson Valley, Nov. 18, 2020.

Then, bucket by bucket, she carries away the remaining rubble. The county has an $850,000 program to help property owners clear their land by providing big debris bins at group sites or on their property. The program was supposed to end Nov. 15 but now is expected to wrap up in December.

Last week, Menzies was filling the bin on her property for the 16th time.

She knows recovery can drag on. In the next few weeks, her son plans to move into his rebuilt home near Alpine that was destroyed in a wildfire two years ago.

And what she’s expecting to recover in insurance money from the loss of her mobile home will not cover the full price of a replacement that meets all modern fire codes.

One-third of the 127 households that registered with the county for aid after the fire noted they were uninsured on intake forms, said Jeff Toney, the county’s director of emergency services. He thought that number would be higher given the increasing departure of insurance companies from areas at high fire risk.

Surveys of residents after fires in other parts of the state suggest that even among those with insurance, most are underinsured.

How to help fire victims

To help those affected by the Valley Fire, the county is working with the San Diego Foundation, which is collecting and managing charitable funds for recovery and rebuilding.

The foundation will make grants to nonprofit organizations and does not grant directly to individuals or families. Donate at www.sdfoundation.org.

Hemp farmer Eddie Campos said he was turned down by four insurance companies when trying to insure his property against wildfire. He ended up not having insurance for what was destroyed at his 40-acre No Boundaries Farm. He estimates his losses at $1.6 million.

Reduced to rubble were indoor grow rooms, storage and offices; inventory; and the majority of the crop. Campos said his team harvested what was salvageable but isn’t sure yet how the quality was impacted.

His son, also an owner of the farm, lost his home, which was on the property.

Campos said he has been on calls with local lawmakers including county Supervisor Jim Desmond, Assemblyman Randy Voepel, state Sens. Ben Hueso and Toni Atkins, and Rep. Mike Levin to advocate for help. He also testified this month before the Assembly Agriculture Committee.

“There's just a huge list of people that we've been in contact with trying to make something happen,” he said. “Trying to figure out what's going to happen for all of us.”

The Trump administration, after first denying wildfire aid, approved a federal disaster declaration on Oct. 16 that bundled the Valley Fire with the bigger blazes that occurred in Northern and Southern California around the same time.

Toney with the county’s emergency services called that “fortunate.” The Valley Fire on its own would have been too small to qualify for federal aid, he said, and the county can provide only limited aid for things like erosion control, not housing and rental assistance.

That’s why having “insurance is huge,” he said.

Since October, those impacted by the fire can apply for limited grants from the Federal Emergency Management Agency and for loans from the Small Business Administration. Because of COVID-19, the agencies are doing the bulk of their outreach and registrations online or through the phone, though they briefly operated an in-person center in San Diego County.

How to get help

Households that suffered damage in the Valley Fire may apply to the Federal Emergency Management Agency through Dec. 15 for assistance. People can apply online at disasterassistance.gov, by downloading and using the FEMA app on a smartphone or tablet, or by calling the FEMA Helpline from 7 a.m. to 10:30 p.m. at (800) 621-3362 or TTY at (800) 462-7585.

San Diego County is providing bins for property owners clearing debris off their land. The information line for the program is (619) 928-8694. People can make an appointment to pick up erosion control materials by calling the county’s stormwater hotline at (888) 846-0800.

For more information, residents can email ValleyFireRecovery@sdcounty.ca.gov. They may also call 211 for health and community resources.

Joshua Havins, who lives in a valley off of Japatul Road near Alpine, is still in the process of applying for aid to help him get through the first phase of recovery after the fire burned his house, boat and tools he used for his work as a handyman. He’s looking for ways other than a utility bill to prove he lived at the property, because he lives there off the grid.

He has yet to clear all the debris from his property, where he’s staying in a travel trailer.

Local government officials are also meeting with FEMA, which can reimburse 75% of some of the public costs of federal disasters.

Credit: Zoë Meyers/inewsource
A flag pole and rose bush were some of the things left in tact after the Valley Fire burned though Eileen Menzies's property in Lawson Valley, Nov. 18, 2020.

FEMA has only agreed to cover costs that fall under emergency protective measures, like erosion control, said Toney, though it’s still under negotiation. That leaves the local government having to pay for items including road clearing and debris removal.

Toney said that recovery will take time, but he’s already seeing the people spring back from the fire.