Homeowners insurance policies are getting dropped at increasing rates in neighborhoods across San Diego County. 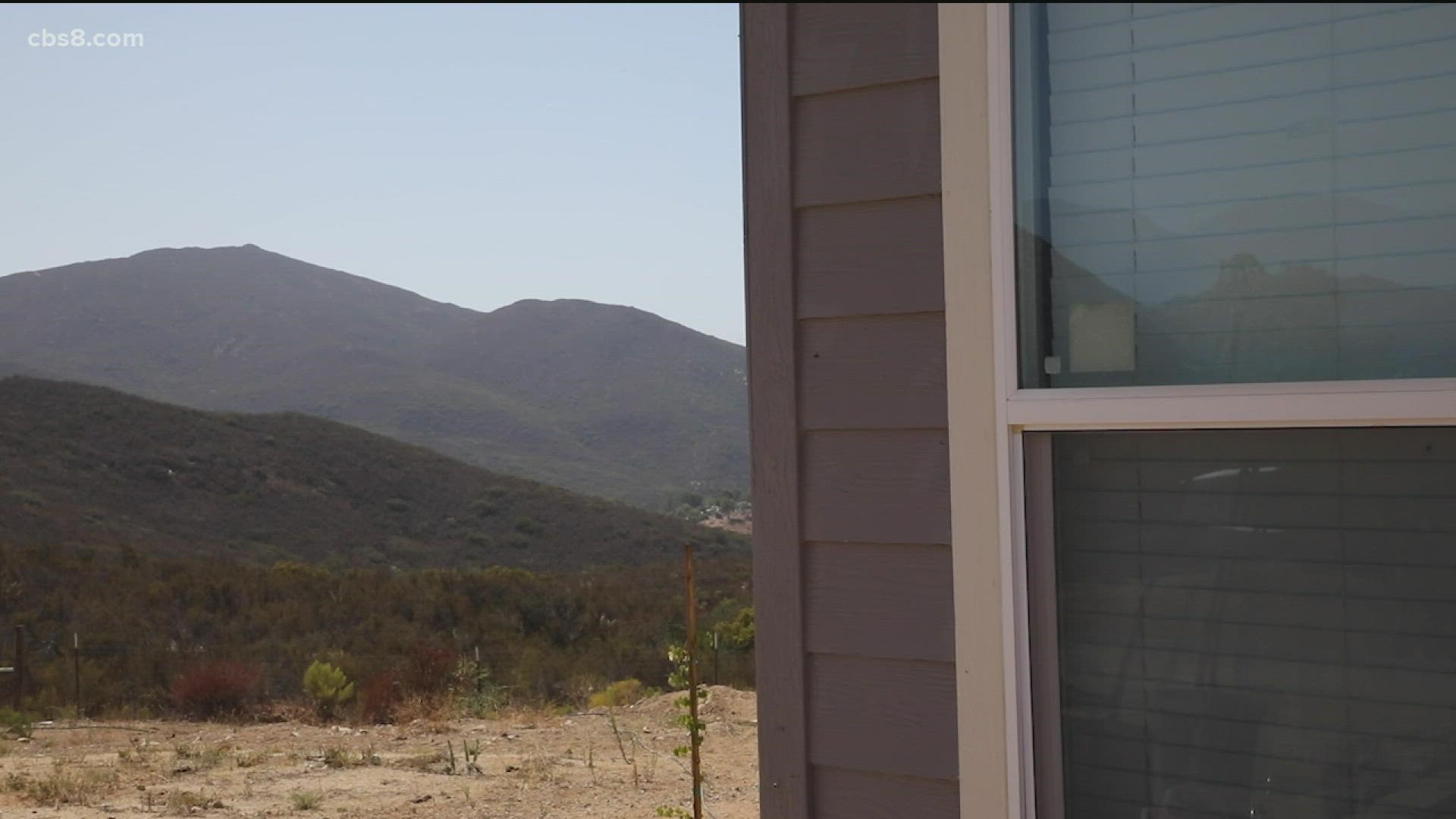 SAN DIEGO COUNTY, Calif. — The threat of wildfire is increasingly leading insurers to drop the policies of San Diego homeowners, a trend most prominent in rural areas but also affecting neighborhoods in the city from Scripps Ranch to Hillcrest.

Seven out of 10 insured homes in San Diego County were located in ZIP codes where insurers increased the share of policies they dropped from 2015 to 2019, according to an inewsource analysis of the most recently available California Department of Insurance data.

The data on homeowners insurance non-renewals in San Diego County, which have not previously been published, show that both high rates of non-renewals and the greatest spike in non-renewal rates from 2015 to 2019 happened in the sparsely populated eastern regions of the county, where the largest brush fires take place. For example, the highest spike in non-renewals occurred in tiny Guatay, along old Highway 80 in the Cuyamaca Mountains, where the rate jumped from 4% of policies getting dropped in 2015 to 42% of policies in 2019.

Credit: Zoe Meyers/inewsource
Maddyson Wallace looks on as her father holds a horse that is having its hooves trimmed at the Wallace's home in Jamul, Sept. 1, 2021.

San Diego’s most destructive fire last year took place in Jamul and Alpine, which insurers had increasingly fled in the preceding years, dropping 16% and 14% of policies in those areas, respectively, in 2019 alone.

After the Sept. 2020 Valley fire, homeowners in the 16 East County ZIP codes in or near the burned areas have been protected from losing their insurance by a new state law that pauses insurance non-renewals for one year in areas that just went through major wildfires. But those protections end Sept. 7, when insurers will be allowed to send notices of non-renewals again.

The rising non-renewals are also affecting neighborhoods in the city of San Diego, including some slated for more residential development as part of the city’s plan to meet its expanding housing needs.

The sixth highest spike in dropped homeowner policies came in the Scripps Ranch ZIP code, which was burned in the Cedar fire of 2003. There, 9.7% of policies were dropped in 2019, up from 1.6% of policies in 2015. The fire destroyed more than 300 homes in the city of San Diego, hitting Scripps Ranch and Tierrasanta the hardest.

Non-renewals more than doubled from 2015 to 2019 in ZIP codes in Sorrento Valley, Rancho Peñasquitos and Rancho Bernardo, communities on the outskirts of the city.

Other neighborhoods with increases include Tierrasanta, where non-renewal rates almost doubled, and the canyon-adjacent communities of Hillcrest and Clairemont closer to downtown, which saw 21.9% and 3.6% increases in non-renewals rates from 2015 to 2019.

Look up insurance cancellation trends in your ZIP code at inewsource.org.

One of the homeowners experiencing the problem is Tammy Smith, who has lived off and on at her family’s Clairemont home near the San Clemente Canyon since she was born in 1959. She said she got a letter about a year ago from AAA saying the company would not renew her homeowner’s insurance.

“They decided that I was in a fire zone,” Smith said. “I live on a canyon, but ... we've never, ever had a problem in my lifetime.”

She felt she couldn’t fight “big business” and the rules had been changed on her.

Working with an independent insurance agent, she said she found a better replacement policy with Farmers Insurance. But, she added, it’s impossible for her to meet her new insurer’s recommendation in a July letter to remove all vegetation from within 100 feet of her home to get the lowest rate. That’s because the 100-foot zone would stretch into a neighbor’s backyard.

AAA did not respond to a request for comment, and the Department of Insurance does not include why insurers dropped each policy in the ZIP code data. But government officials have blamed the rising statewide difficulty of getting affordable coverage on insurance companies reevaluating the risk they’re willing to take following devastating wildfires fueled by climate change and dry vegetation.

In total, insurers have dropped 84,722 policies in San Diego County from 2015 through 2019. The average number of policyholders each year is around 680,000. Many areas experienced their biggest spike in non-renewals in 2019, with more than a dozen ZIP codes seeing more than a tenth of policies dropped in that year alone.

The ZIP codes that saw decreased rates in non-renewals from 2015-19, including in Coronado, Imperial Beach and Pacific Beach, are mostly located along the coast.

The increasing non-renewals can place an additional financial burden on homeowners whose mortgages require them to carry insurance at a time when costs are rising. Nearly 90% of the 264 Californians who filled out a voluntary survey by nonprofit United Policyholders said their cost of insurance went up when they switched insurers. Respondents from San Diego County cited increases between $200 and $3,000 a year or more.

Some residents facing mounting insurance problems want the city to do more to address the high fire hazards blanketing their neighborhoods near public open space from Cabrillo Canyon in Balboa Park to Tecolote Canyon in Clairemont to Black Mountain Open Space Park.

“It just needs to be better handled because we can't screw around anymore,” said Lisa Johnson, a 20-year resident of a home on the rim of Tecolote Canyon in Clairemont. “We have wildfires all the time now.”

As chair of the Coastal Canyon Fire Safe Council, Johnson advocates for more fire safety as her community is targeted for more growth. She said her residential policy was dropped by State Farm following the 2007 wildfires that burned 9,250 acres and 365 homes in the city of San Diego.

“If cities and states are not providing the fire preparedness that we need as homeowners, and we as homeowners are being held responsible for that by our insurance company, that creates a really big problem,” she said.

As homeowners ask why their policies were dropped and who to blame, advocates for policyholders want more rules guiding the insurers’ decisions not to renew policies.

Steve Wallace, a Jamul resident and a member of the Jamul Fire Safe Council who saw the Valley fire last year get within 500 feet of his home, said he expects insurers to drop a lot of policies in his community once the one-year ban for areas that went through wildfires ends. He wishes there were more protections for homeowners, especially those who clear defensible space and upgrade their homes to make them more fire-resistant.

“If they don't clean it up and they're not taking care of the property, then that's a valid reason,” he said about insurers deciding to drop a homeowner’s policy. “But just because of where they live, I don't see how they should be allowed to do that.”

Asked to weigh in on the trend, Mayor Todd Gloria’s office declined to comment. A spokesman for Insurance Commissioner Ricardo Lara said he is seeking to increase competition for consumers’ business by developing standards to encourage insurance companies to write policies in areas of high fire hazard if homeowners take steps to reduce the risk.

To create defensible space aimed at protecting homes from wildfires, the city of San Diego requires property owners to clear vegetation from the 35 feet around their homes and thin the vegetation out to 100 feet.

City officers inspect roughly 45,000 properties over 3.5 years for brush and weeds, although they failed to meet inspection targets in the last two years because of unfilled positions.

Where the 100-foot zone extends into public land, the city is most often responsible for thinning flammable vegetation. That comes out to 921 acres which crews from the city’s Parks and Recreation Department's Open Space Division visit on a rotating schedule about every two years. The city says it gets close to its targets for brush management every year. But it does not keep detailed records or maps of where precisely crews are thinning the vegetation, said Tim Graham, a department spokesperson.

Johnson said she’s only seen crews thinning vegetation behind one or two parcels in the canyon behind her house, but she’s never seen them working along slopes across much of the canyon. Last month, inewsource visited Johnson's neighborhood and noted dry grasses and brush on one side of the canyon and dense foliage from the bottom of the canyon to right up against homes on the other side. For some of the properties, the vegetation in the canyon appears to violate the requirement that homes have 100 feet of defensible space.

Graham said there could be a few reasons explaining why homeowners might not see crews behind their houses, including if the area was already in compliance with the goal of thinning vegetation to 50% or if the area was unsafe because it was too steep or had poison oak or cactus.

The city’s responsibility to clear vegetation near homes also only extends to homes built before 1989, when the brush regulations were adopted, he said.

Roughly 1,500 complaints come in every year regarding brush, city fire marshal Doug Perry told the city of San Diego’s public safety committee in June of this year. Though property owners have six weeks to fix their problem if they’re found to be out of compliance, there is no deadline for the city to address complaints on public land, he explained.

Perry told inewsource last month the city is doing its best given a limited budget to thin vegetation near homes within the 100-foot buffer required. However, the city’s brush management does not extend to the much larger open spaces near residential areas.

“I don't think you're ever going to see the large areas have any kind of vegetation management, unless there's some kind of state funds or federal funds and a determination is made that this would be a great place to do a firebreak,” he said.

He also said that environmental rules can add time to a project due to reviews and restrict when and where the thinning of vegetation, especially native vegetation, can take place.

For example, crews cannot cut down vegetation in habitat for the California gnatcatcher, an endangered species with a range limited to parts of Southern California and Baja California, during nesting season between March and September.

Despite those obstacles for land managers trying to prevent fires, insurers are watching, including in more urban neighborhoods, insurance professionals say. Staci Pappazi, the owner of Pappazi Insurance Agency, said she’s seen insurers get more strict over the last two to three years. She said she can sometimes tell just from a satellite view of a client’s home whether insurers will shirk from providing coverage because of nearby brush.

“It’s not your areas of Jamul and Descanso and Boulevard and Pine Valley that you would expect,” Pappazi said. “There's a lot of 92117, which is Clairemont; 92119, which is San Carlos; 92120, which is Del Cerro, that are also struggling and going through this right now.”

The San Diego Fire-Rescue Department has already responded to hundreds of vegetation fires from January to July of this year, according to records shared with inewsource.

A fire in a dry field along Carmel Valley Road grew to 10 acres on June 27, getting within yards of homes, but no other fires were larger than two acres and most were contained to spot fires. Perry said the city has been adding equipment to its arsenal including a $20 million helicopter in 2019 to drop water to quickly stop fires, including at night.

But there is a risk an ember storm from even a small blaze could roar quickly through a canyon.

It’s happened before: in 1985, a fire fueled by heavy dry brush and winds swept up Mission Valley canyons to destroy 76 homes in Normal Heights.