While the venue is allowing limited guests inside with facial coverings on, no food or drinks are available and the club is not charging any entrance fees. 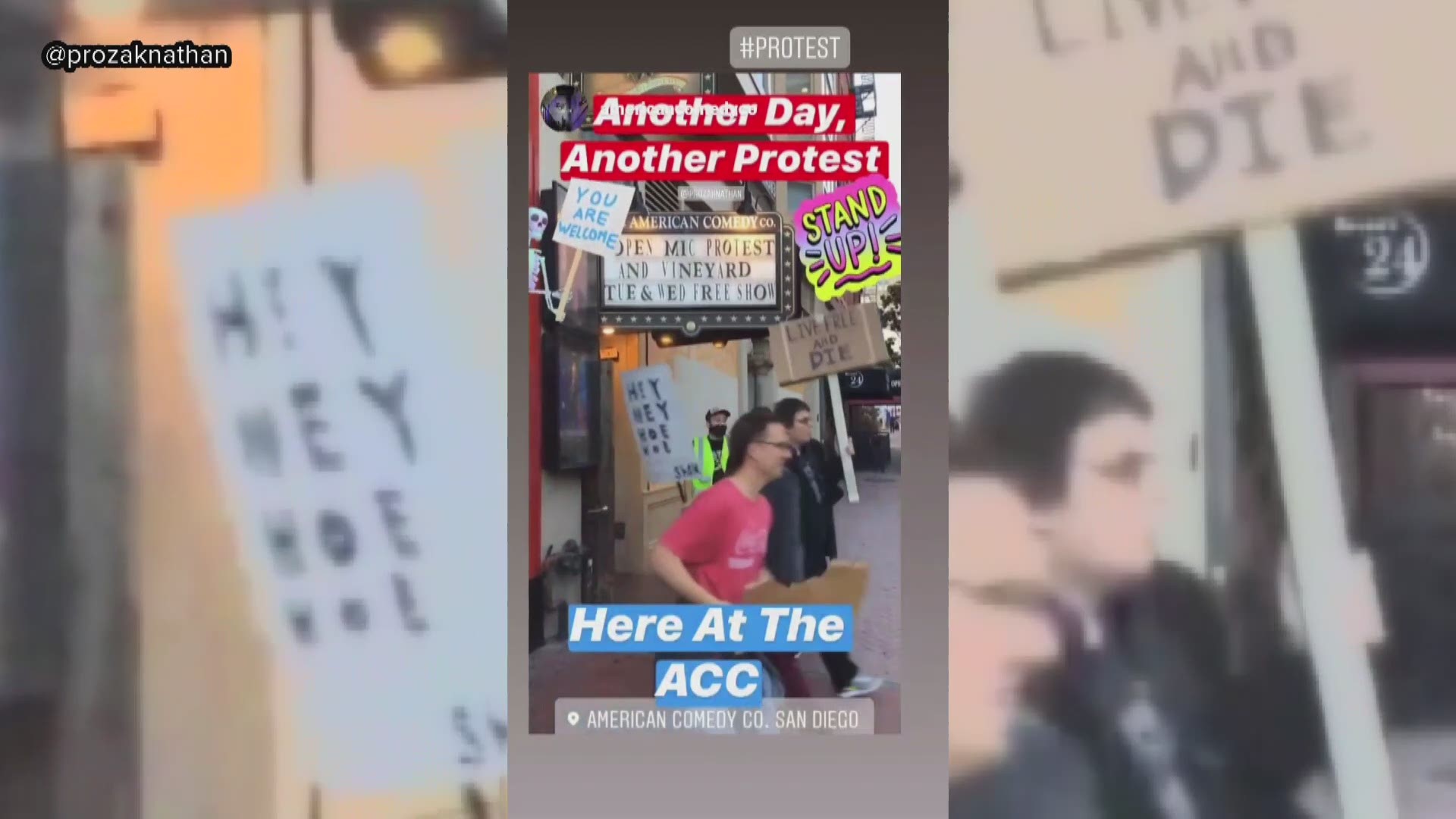 “We no longer have a stage,” said Nathan Donovan, the club's open mic host. “We have a 'protest platform.'"

“It’s fun getting to name these things,” Donovan added.

The move comes in response to some questioning why people can legally gather for protests, but not for other events, such as a family picnic.

“I recognize the dichotomy between those examples. All I can offer is this consideration: Do what you think is best, not only for you, but for the health of those you love,” said Governor Gavin Newsom at a COVID-19 briefing.

“Well, people who protest is a constitutional right," said Dr. Wilma Wooten, San Diego County’s public health officer, at a briefing in June. “We just ask that if they do protest to wear their facial coverings and adhere to social distancing.”

“This whole process, there’s been a major disconnect between what can and cannot be open,” said Donovan.

The venue has not only changed its terminology, but also its safety protocols. Donovan said it only allows 50 people area inside the building instead of 200. Between each performer, the microphone is cleaned and everyone must wear a face covering.

“We’re happy to abide by any rules and regulations, which we have been doing,” said Donovan.

Additionally, while the club is open, employees aren’t charging any fees. Food and drinks aren’t for sale for the time being and the current “protests” are free to attend. For-profit shows are on hold until further notice.

“It’s kind of hard to do comedy with a completely sober audience,” said Donovan.

Donovan said he worries that comedians that suffer from mental health issues need an outlet to express themselves.

“Suicide is rampant in the comedy industry,” said Donovan, listing off the names of various comedians that have died.

“We really want to give people an outlet. We care about people’s physical health as well as their mental health and a lot of these ‘protesters’ now can’t afford to go to a therapist, so the three minutes they come on our protest platform - it used to be a stage - is really the only outlet they get,” said Donovan.

A new daily high of 38 COVID-19 positive patients were hospitalized in Wednesday's data, and about 136 of every 100,000 San Diegans are testing positive for the illness, which is well above the state's criterion of 100 per 100,000.

Despite the uptick in countywide cases, some local leaders believe San Diego County needs to have the authority to open its businesses. County supervisors Kristin Gaspar and Jim Desmond and San Diego City Councilman Chris Cate sent a letter to ewsom on Wednesday evening, asking the governor to rescind orders to shutter indoor business in multiple industries -- including bars, restaurants, museums, cardrooms, zoos and theaters.

"This statewide one-size-fits-all approach to closing entire business sectors is misguided as evidenced by the many sectors in San Diego forced to close their doors again despite not having contributed at all to the rise in our local cases. As such, we are requesting the review of our county's data to take place as soon as possible, thereby allowing San Diego businesses to re- open if appropriate," the letter reads in part.

“People really need to laugh right now, so if anybody wants to just come in and take their mind off the state of the world, they can hear these funny ‘protesters’ speak their mind and just relax a little bit,” said Donovan.

However, the “protest” terminology will end soon.

RELATED: Magician beats COVID-19 with trick hidden up his sleeve

RELATED: Protests have not contributed to rise in COVID-19 cases, research group suggests