Stores in the La Mesa Springs Shopping Center and other local businesses were vandalized, looted, and burned after a protest that had started peacefully. 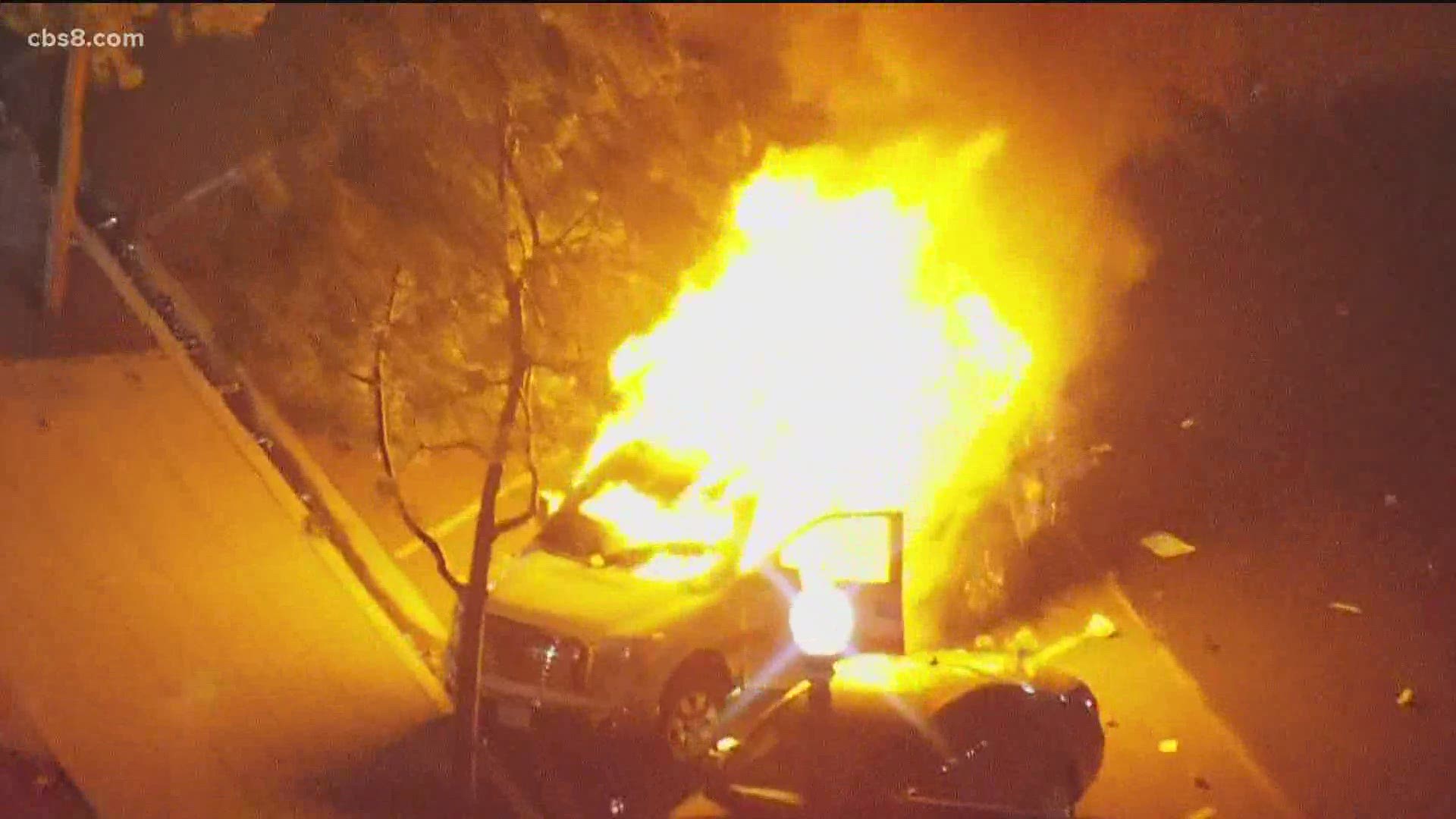 SAN DIEGO COUNTY, Calif. — Protests continued late Saturday night in La Mesa in East County San Diego. Stores in the La Mesa Springs Shopping Center at the corner of University Ave. and La Mesa Blvd. were seen being looted with windows broken out around 9:15 p.m. One store was on fire at one point during the incident.

Late in the night the Chase Bank and Union Bank in the area both went up in flames. Both buildings were completely engulfed in flames and began collapsing just before 12 a.m.

Around 8:45 p.m., a Heartland Fire Department vehicle was seen on fire near La Mesa Police Department headquarters. At least one car near the vehicle also went up in flames.

The original protest that preceded the vandalism started peacefully around 2 p.m. with protesters calling for justice after an altercation was captured on video between a La Mesa police officer and a black man earlier in the week. The man was arrested on suspicion of assaulting an officer and the encounter was videotaped and appeared on social media. The officer is on leave from the department pending an investigation.

The La Mesa protest was also organized in response to the death of George Floyd in Minnesota. Protests around the country began in Minneapolis following Floyd's death Monday after a police officer pressed a knee on his neck for more than eight minutes.

A reporter for the San Diego Union-Tribune tweeted video at 8:15 p.m. of an American flag set ablaze and run up a flag pole outside La Mesa's American Legion Post 282.

Earlier in the evening, protesters at LMPD headquarters were sprayed with tear gas around 6 p.m. Saturday evening after hours of protesting at the building and around La Mesa. News 8 video shows windows were broken and words were spray-painted on walls and signage at La Mesa City Hall.

Tear gas was deployed after a police armored vehicle was vandalized with rocks being thrown and the BearCat was spray painted.

Earlier in the day, an estimated 1,000 protesters blocked Interstate 8 in both directions near La Mesa as part of their demonstration.

The protesters chanted "black lives matter" and carried signs such as "no justice, no peace," as they marched down University Avenue.

At first, the group was stopped when they tried to get on I-8 at the Baltimore Drive entrance by California Highway Patrol officers. But soon after, the protesters broke through the CHP line and continued marching eastbound on the freeway.

The CHP then halted traffic on I-8 eastbound and when protesters began marching on the westbound side, traffic was then halted on that side of the freeway.

Around 5:30, demonstrators started throwing rocks at an armored vehicle and through the windows of La Mesa Police HQ.

At 6:45 police announced the protest as an unlawful assembly and started announcing via helicopter that demonstrators would start being arrested if they do not disperse.

Saturday's protest in La Mesa was one of many following a Memorial Day incident in Minneapolis when a police officer, Derek Chauvin, was videotaped pinning George Floyd to the ground with his knee on his neck, which eventually led to Floyd's death. Chauvin was arrested and charged with third-degree murder and manslaughter on Friday.

Outrage over Floyd's death built across the country and many protests have turned into rioting.

La Mesa officials said they are launching an outside investigation into the Wednesday incident at the Grossmont Transit Center. 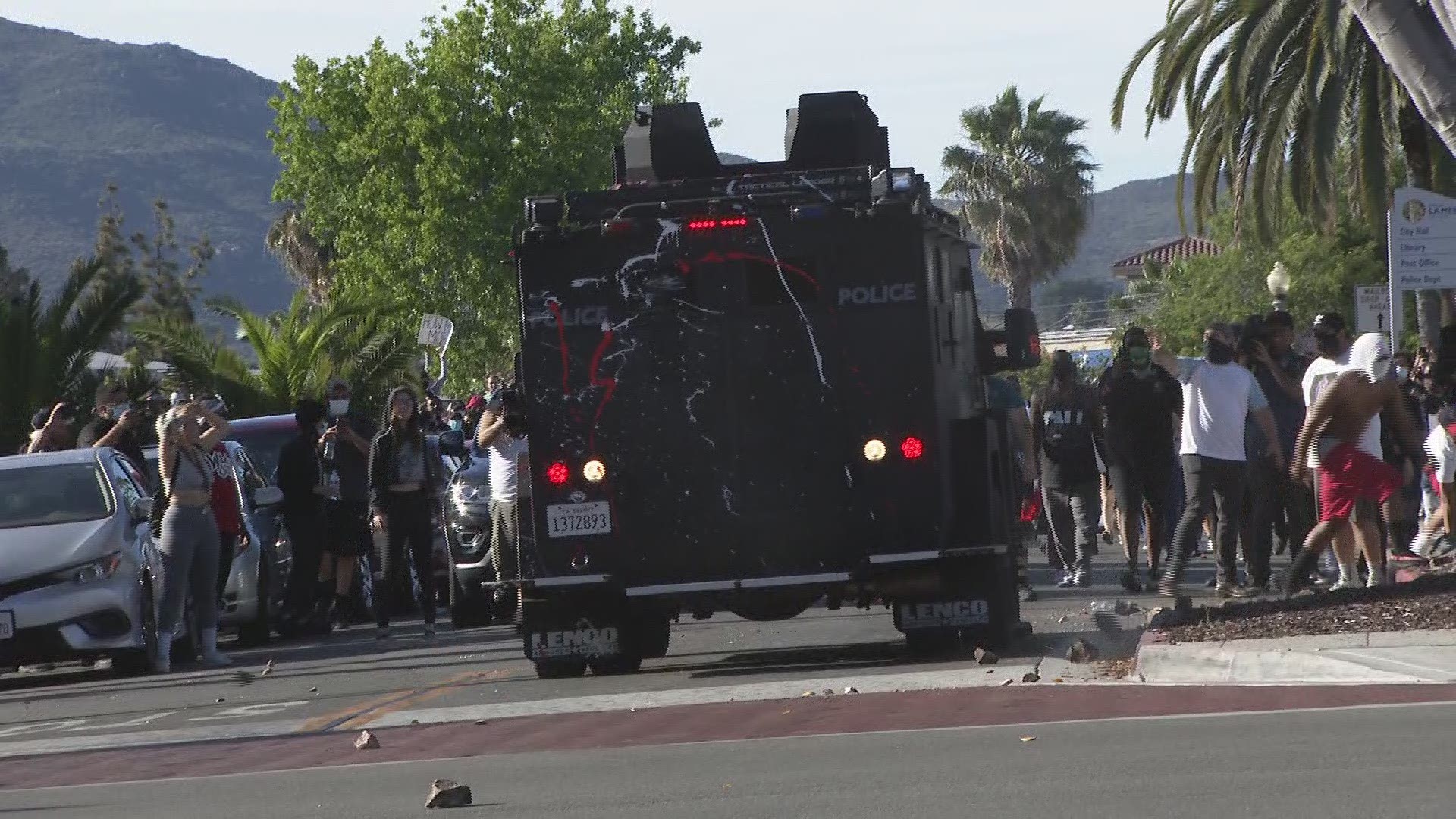