News 8 clips offer a look back at one of the most riveting cases in San Diego history. 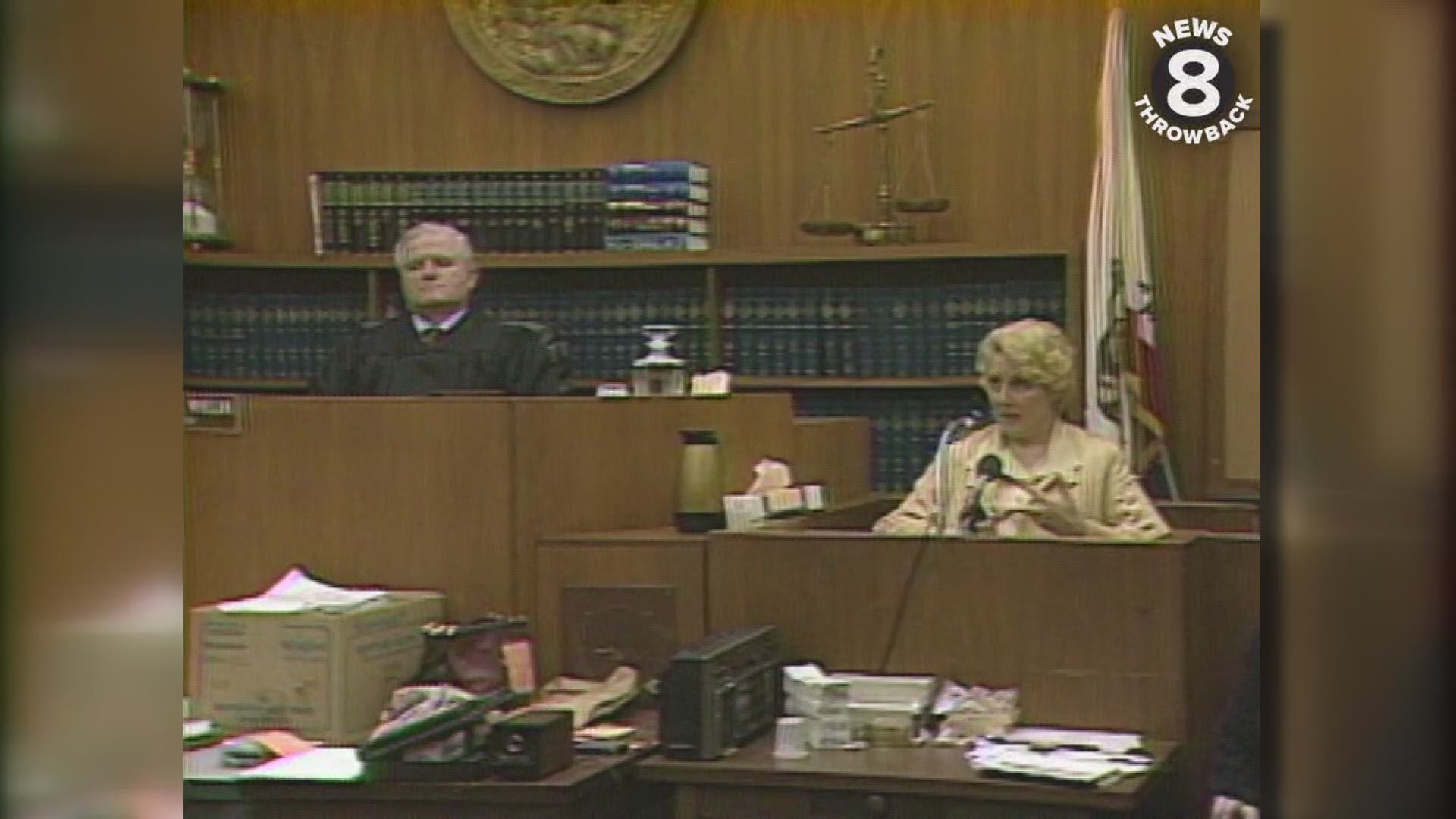 One of San Diego’s most well-known murder cases started 30 years ago this week when two bodies were found in a home in the Marston Hills neighborhood. In the early morning hours of Nov. 5, 1989, prominent San Diego attorney Dan Broderick and his second wife Linda were shot to death in their bed. By the end of the day, Dan’s ex-wife Betty Broderick had turned herself in admitting to the shooting but claiming she had not planned the attack.

Two trials followed the murder in which Betty and her two eldest children took the stand. Each side painted a different picture of life in the Broderick household and the end of Dan and Betty’s marriage.

News 8 clips from the day of the murder, both trials and from the set of the television movie inspired by the Betty Brodereick offer a look back at one of the most riveting cases in San Diego history.

The day Dan and Linda Broderick were found dead in their San Diego home, News 8’s Lorraine Kimel reported from the scene of the double murder. At the time Dan’s ex-wife Betty Broderick was wanted for questioning. Lorraine spoke with friends and colleagues of Dan who were shocked and saddened by the news. Dan was a well-respected medical malpractice lawyer who also graduated Cornell University with his medical degree.

Betty Broderick first went on trial in October 1990 for the murders of Dan and Linda. During the trial her two daughters – the eldest of her four children with Dan – took the stand. Kim, 20, and Lee, 19, testified about their parents’ relationship and what their mom said to them after the murders. A friend of Betty’s also testified about the defendant’s personality and her obsession with money - “she’s real close to money, she worshiped money,” the woman said on the stand calling Betty “very materialistic.”

In both of the trials against her, Betty Broderick took the stand in her own defense. This collection of clips shows some of the things Betty testified to in the first trial in 1990 – painting her ex-husband as controlling and claiming she had no financial means after they divorced. Betty testified about the day of the murder saying she did not remember pulling the trigger and firing the five shots that resulted in the deaths of Dan and Linda.

As the first the double-murder trial of Betty Broderick came to a close in mid-November 1990, both sides addressed the jury with closing arguments. Prosecutor Kerry Wells described the killings as “a double execution” and pointed to Betty pulling a phone from the wall as showing her intent for Dan to die and not be able to call for help. Betty’s lawyer Jack Earley made the defendant out to be the victim and said Dan tormented his former wife. The second clip from a few days later shows Judge Thomas Whelan declaring a mistrial after the jury could not reach a unanimous verdict. News 8’s Marianne Kushi reported that both sides admitted a retrial would be difficult especially the task of finding an unbiased jury.

In 1991, Betty Broderick went on trial for the double murder of Dan and Linda Broderick for a second time following a mistrial the previous year. Again, Betty took the stand and testified that Dan controlled their finances leaving her to feel “victimized.” She talked about her suffering during her divorce from Dan and how she was left feeling “helpless and defenseless.”

The second trial of Betty Broderick ended in a verdict that stirred mixed emotions for many. News 8’s Chris Saunders reported on Dec. 10, 1991, as the once San Diego socialite sat with a smile as she was found guilty of second-degree murder. The prosecution said they were pleased, but it was clear that they were hoping for a first-degree conviction. Betty’s lawyer Jack Earley said it was a partial victory for their side and made excuses for her smiles during the verdict attributing it to her role as the “social people pleaser.” Five of the 12 jurors spoke with reporters, including News 8’s Marianne Kushi, following the verdict about how their deliberations went and how the case affected them.

As Betty Broderick was learning her fate for the double murder of her ex-husband and his second wife, a television movie was being made about the compelling case. In this two-part feature, Meredith Baxter spoke with News 8’s Marianne Kushi about what had led her to the project, which was then titled “’Til Murder Do Us Part.” Baxter went on to be nominated for an Emmy Award for what became a two-part TV film – part one was called “A Woman Scorned: The Betty Broderick Story” and part two released in 1992 was titled “Her Final Fury: Betty Broderick, The Last Chapter.”

The Betty Broderick story will soon get another turn on the small screen – the television series “Dirty John” has chosen to dramatize the case for the second season of the anthology on USA Network. Amanda Peet has been tapped to play the infamous Betty Broderick and Christian Slater will take on the role of Dan Broderick, according to reports.

As of 2019, Elizabeth “Betty” Broderick remains in prison serving her time in the California Institution for Women. She is 71 years old and was last denied parole in 2017.