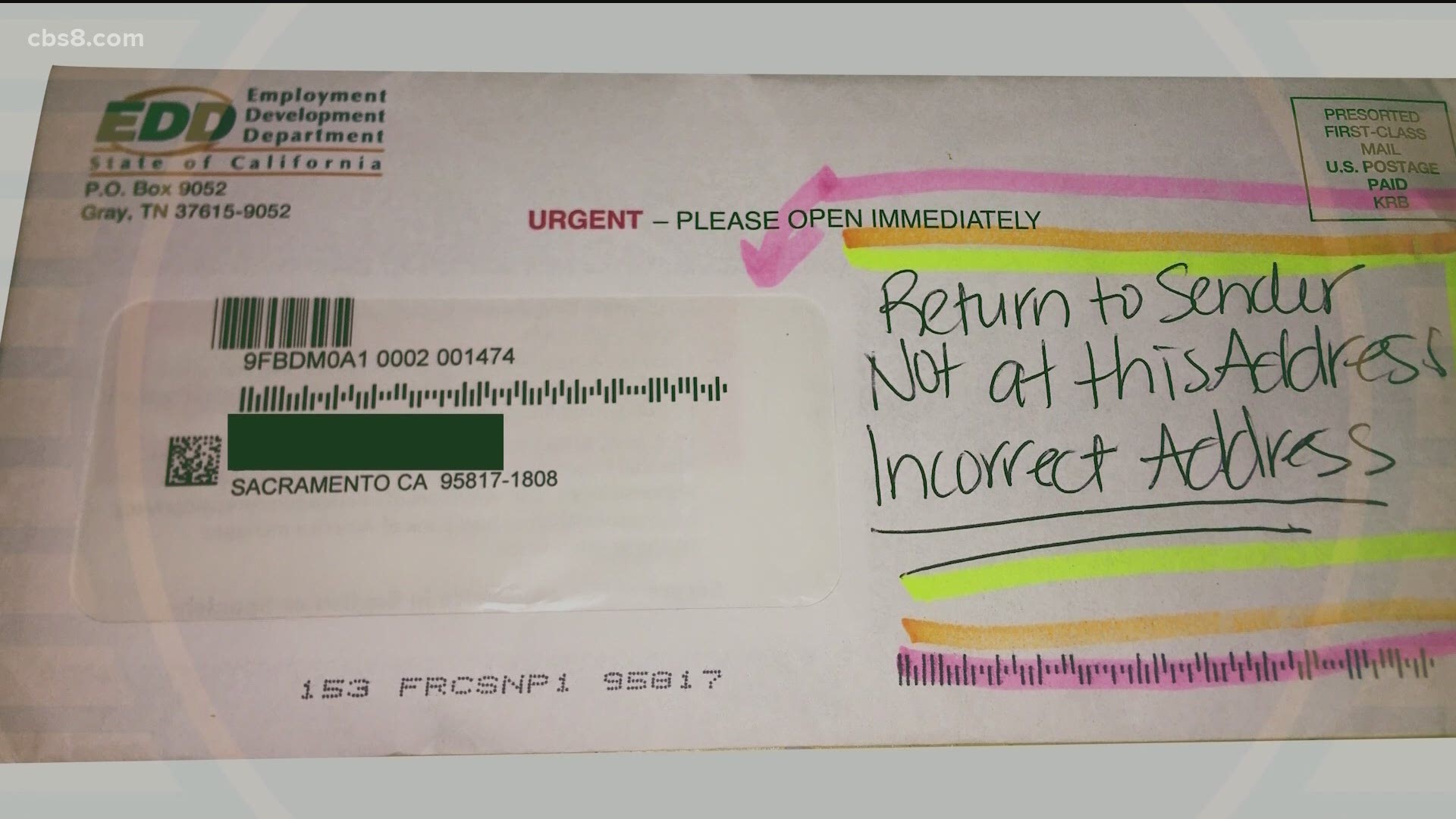 EL CAJON, Calif. — People all over California are receiving unsolicited letters in the mail from the Employment Development Department (EDD) with the wrong addresses on them.

For the past three weeks, Tylar Bailey said she’s been getting the EDD letters delivered to her El Cajon home, sometimes 10 at a time.

“I've received probably close to 40. The majority of them I have sent back, 'return to sender, not at this address,'” Bailey said.

The letters all are from EDD and they all have Bailey’s home address, but they have someone else's name above the address.

And Bailey is not alone.

“Twenty-two pieces of mail I have received in the last week and a half,” said Amy Brooks of Los Angeles.

“They are all addressed to different people but they all came to my address. My address was on the envelope and they all came from different processing centers too,” said Staci Endicott of Sacramento.

It’s the same story up and down the state.

“It’s either somebody's filing a bunch of false claims or EDD is just too overworked and can't figure out what goes where,” said Bailey, the El Cajon resident.

EDD emailed News 8 a statement suggesting the flood of letters might be connected to “fraudulent schemes” and the agency encourages people to report fraud on its hotline.

“I tried to call the EDD fraud hotline probably over 50 times and not one person answered,” said Bailey.

She thinks the problem seems more like an EDD technology glitch.

“There's way too many different people, and I mean I get all of them in the mail. I get sometimes 10 at a time with different names.” Bailey said. “They all say 'EDD' with different cities. Some say 'EDD overpayment' and some just say 'EDD.'”

“I’m not going to make the claim that EDD is an inside job, but I'm getting close. We've got to find out whether or not the ring is inside or outside,” said Patterson, R-Fresno.

The sad part is these envelopes could be important to unemployed workers, who have been waiting for weeks and months to receive their unemployment money.

“[It's] very sad. Some people really need this money,” said Bailey.  “And now, who knows if they'll ever get that mail?”

Bailey said she has filed for unemployment in the past, when she was on maternity leave two years ago, so her info is in the system. Still, she has no idea how her address became connected to the mass mailings.

Most recipients simply return the letters to their mail carrier with a return-to-sender note.

"It’s extraordinarily unfortunate that fraudsters tend to become much more active during emergency situations like the current COVID situation, exploiting the very efforts California and all other states are taking to issue benefit payments as quickly as possible to workers impacted by this historic pandemic. The EDD’s investigation team is aware that people are receiving multiple pieces of EDD mail while asserting they have not filed an unemployment claim.

Our investigators are working with local, state, and federal partners in exposing fraudulent schemes at the core of these multiple claims, developing methods to stop and prevent such claims from being paid, and prosecuting the unscrupulous offenders to the fullest extent of the law. The EDD has information posted on our website encouraging people who do receive such mail or witness other suspicious activity to report it to EDD right away."